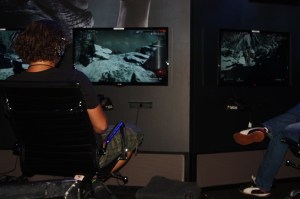 Above: More action in Call of Duty: Ghosts.

GamesBeat: The part about being able to upgrade from Xbox 360 to Xbox One, is that a difficult technology for the game-makers to come up with, or is it something that you expect almost everybody to do?

Hirshberg: It also works on the PS3 to the PS4. We partnered with the first parties on this topic very early, because we have a big community and we want to keep it together. We want to make it as easy as possible for them to migrate to the next generation. That benefits not only our games, but also the first party and their marketing efforts. People have invested a lot of time and accomplishment into these games. If they can take those things with them, like their Season Pass content, it’s going to make the proposition that much more appealing.

GamesBeat: What were the discussions like as far as including women soldiers?

Hirshberg: That’s something we’ve wanted to do for a long time. We’ve had a lot of requests from the community. A lot of women play the game. The reason it was right to do this year—As you know, in past Call of Duty multiplayer games, you didn’t even have control over which avatar you had in the game, let alone all the customization. That wasn’t an area with a lot of control baked in.

This year, with all the focus on character customization, we’re giving people the ability to decide not only how their soldier is outfitted and equipped, but how they look, with all kinds of different visual options. We thought that this was the right year to introduce female characters. It provided a nice closing shot for the trailer, too.

Above: Cool graphics in Call of Duty: Ghosts.

GamesBeat: Analysts are saying that this game defies gravity. It seems like eventually they’re going to have to be right.

GamesBeat: What are you doing to hold that off for another year?

Hirshberg: At a certain point, the narrative behind that question should change. I don’t know where the threshold is after which people stop talking about “defying gravity,” as if there’s some kind of downward force on it, and acknowledge that it’s a franchise that continues to gain momentum. I know that’s counterintuitive in a lot of ways. It defies conventional wisdom. But I think that Call of Duty has more in common with the way that we consume our favorite sports leagues and teams than, say, a blockbuster movie.

This is something people engage with year-round. They engage with it in multiple ways. We have blockbuster launches, but then there’s a long, solid tail of content that keeps people engaged for a long time. People develop rivalry and camaraderie and social networks, both virtual and actual, around playing this game. If we keep providing superb content and innovation each year, people seem to have a continued appetite for it. 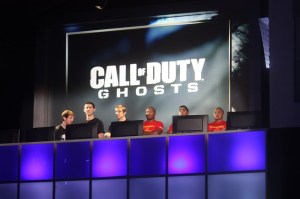 Above: Pro gamers and Marines play Call of Duty: Ghosts.

GamesBeat: The rise of eSports seems to have helped as well.

Hirshberg: It’s something we’re obviously very interested in. People play Call of Duty competitively. They did it long before we started putting features in the game to make it more seamless. The Call of Duty world championships we staged this year was incredibly well-viewed. It was a great event for us. It drove tremendous engagement. We want to make sure that we’re baking it into the game, and we want to make sure people from a lot of different levels can participate.

GamesBeat: I’m curious about some of the third-party analysis of preorders. Cowen & Co.’s analysts came up with their index for pre-orders. The good thing was that they showed that Ghosts is number one, but they also believe that it’s down significantly from Black Ops II.

Hirshberg: We’ve talked about this from the very first earnings calls addressing this year. If history is any guide, console transition years bring a lot of excitement. They also bring a lot of obstacles within the year. People are unsure which platform they’re going to get or whether they’ll upgrade or when they’re going to upgrade. It’s not the same as selling into a stable ecosystem where everyone knows what machine they have and what machine their friends play on. There’s a lot more uncertainty. We anticipated that having an impact, and we’re seeing that to an extent, but I was glad to see the Cowen analysis as well, showing that Ghosts is still on top in terms of demand. That matches our internal analysis. We think the console transition will provide some huge opportunities in the long term and some challenges in the short term, like they always have.

GamesBeat: The game changes a few things pretty drastically this year in the single-player campaign, like with the emphasis on stealth. How have those things gone over? Have you been able to measure that?

Hirshberg: Well, you haven’t played the whole game yet. [laughs] You might be responding to some of the levels we chose to show at our reveal surrounding E3. I get where you’re coming from, if all you’ve seen are the underwater levels and the Cornered level and the No Man’s Land level. Those do have a more tense, quiet, stealth gameplay signature to them. Trust me when I say that this game has the big Call of Duty cinematic, over the top moments as well.

Those levels were chosen for a couple of reasons. They were great demonstrations of the next-gen visuals. The underwater area is on a whole different level of rendering compared to what we’ve done in the past. We kind of get this critique coming and going. If things feel too much like past years, people say it’s just another Call of Duty game. If it veers too much, people say we’re changing too much. I think we’ve struck a nice balance. I’ve played the campaign from start to finish multiple times at different points in the development process, and it’s great. We have a great variety of gameplay. The levels where you get to play with and as Riley the dog are super fun. You’ll see, in more reveals to come, the variety and the events big and small that are baked into the campaign.

I do think that tonality is one of the things we strove for with [Hollywood script writer] Steve Gaghan’s involvement and the idea of playing with a single squad through the entire campaign. We wanted to build more relationships and have a little less anonymity to the characters surrounding you. Those slower-paced moments, more stealthy moments, are great for that.