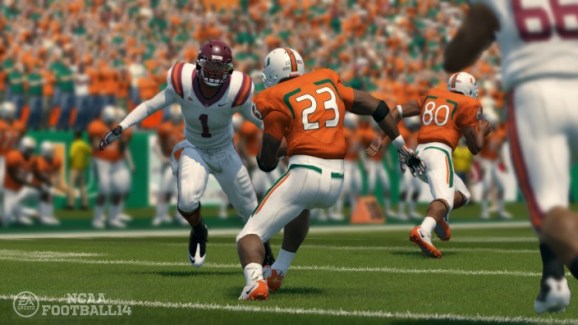 Yesterday, NPD reported the results for July 2013. Total sales for hardware, software, and accessories were down again. Total sales only amounted to $443 million, which is down 19 percent from $549.1 million.

When bad news isn’t as bad as we expected

When bad news isn’t nearly as tragic as everyone was expecting, you can pass it off as good news.

As for the industry as a whole, Creutz was expecting July sales to slip 29 percent instead of just 19 percent.

A big part of the decrease is retail PC sales, which are down 30 percent year-over-year.

Creutz believes these numbers suggest the industry is only experiencing “modest transition drag.” That’s an analyst’s way of saying that the slowdown everyone was expecting to occur because of the looming next-gen consoles isn’t nearly as painful as anticipated.

The Xbox 360-to-Xbox One and PlayStation 3-to-PlayStation 4 transition still exists. It’s still causing games to track downward, but the Cowen analyst points to the top-selling game of July, NCAA Football 14, as a good example of a game that performed better in the face of consumer hesitation than expected.

“EA’s college football title [was] down less than 7 percent versus last year’s initial month of sales,” wrote Creutz. “We had been expecting something in the down double-digits range, so this was a pleasant surprise.”

The end of the downward spiral

What’s even better about this is that the industry is likely going to stop shrinking next month.

As evidence for this, we can look at another EA Sports game: Madden NFL 25. The concern with NCAA Football 14 was that gamers are so looking forward to Xbox One and PlayStation 4 that they wouldn’t waste their time with a game that isn’t scheduled for release on those next-gen devices.

Madden NFL 25 doesn’t share that issue. EA Sports is releasing the pro football sim on both current and next gen, and it’s already on pace to best last year’s release, according to Creutz.

“Madden 25 appears to be tracking relatively better into its launch, compared to last year, than NCAA did,” writes Creutz. “That’s including strong demand for the $100 special edition which includes a full season ‘trial’ for DirecTV’s NFL Sunday Ticket, so we are optimistic that EA will hold serve on its sports franchises heading into the console transition.”

EA’s premiere sports game (at least in the U.S.) is due out at the end of this month. Madden NFL 13 hit in September of last year. That shift almost guarantees we will see an end to the negative year-over-year comparisons that are a monthly ritual of the NPD reports.

The question is: Are we looking at a period of prolonged growth? Creutz thinks so.

“We expect the next several months of NPD data to print positive year-over-year growth in the strong double-digit range,” writes Creutz. “The launch of Grand Theft Auto V in September should more than offset the move of Madden, and October will benefit from the launches of Battlefield 4 and Batman: Arkham Origins versus a light slate last year. Given the positive sentiment on next-gen consoles coming out of E3 and a much fuller overall release slate than last year, we think that November and December could also wind up in positive territory, with the year as a whole potentially squeaking out a year-over-year gain.”

That’s it, then. We’ve arrived. The first half of 2013 was the worst of it, and it’s clear sailing from here, right?

“In general, we believe the fact that next-gen consoles appear poised for a good launch is far more important than current NPD trends,” writes Creutz.

This is where we would usually get to the “but” — something to remind us why we shouldn’t let out a sigh of relief quite yet. Maybe something to do with the competition console and PC gaming faces from smartphones and tablets.

But — ah, there it is — the truth is that things were never as dark as they appeared.

Digital sales are starting to make up the difference

Those gloomy NPD reports were only as scary as they were because they only report the sales of new physical games at U.S. retailers. That’s a shrinking slice of the “how people buy games” pie.

Each month the NPD estimates what it believes the total spending of games is including the aforementioned new physical games at retail, along with digital sales of full games and DLC, subscriptions, mobile apps, social games, and used/rented titles. For July, NPD estimates that all of that spending reached around $1.2 billion.

NPD rival SuperData Research, which focuses on tracking digital sales, estimates that the digital sales for console games, PC releases, mobile apps, social games, and subscriptions were $1.1 billion on their own in July. That number doesn’t include any physical sales.

Remember how retail PC sales were down 30 percent. Well, according to SuperData, digital PC sales reached $158 million in July in the U.S. That’s up 15 percent from 2012.

The truth is — and this is where you breathe that sigh of relief — is that consumer spending on games didn’t just evaporate. It just moved online, and retail spending is about to start growing again … finally. The industry got through the worst of it and — for now — most indicators are looking up.