I got a good dose of multiplayer action this week at the Call of Duty: Ghosts event in Los Angeles. But I didn’t emerge from that combat any wiser about how to stay alive in the upcoming game’s relentlessly competitive multiplayer combat.

Tina Palacios, the community manager at Infinity Ward, offered her condolences to me after those sessions and offered her advice on how to learn from my death streaks. As a veteran Call of Duty player, she spoke with GamesBeat about the team’s design decisions to help or hinder the “noobs,” or newbies, among us.

Here’s an edited transcript of our interview with Palacios. 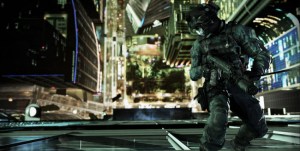 GamesBeat: So how do I stay alive for more than 30 seconds in Ghosts multiplayer?

GamesBeat: I did OK. I’m learning. I think when it’s brand new and people start playing, that’s one of the questions. What’s the quickest way to learn how to survive a little longer?

Palacios: We introduced Squads, which is our third mode. It’s basically combat training. You can jump in and customize your soldier and your loadout and play against bots until you feel confident enough to jump into multiplayer. While you’re playing in Squads, you’ll get multiplayer experience, so it’s not like you’re missing out on that.

GamesBeat: The bots, do they teach you about certain kinds of tactics?

Palacios: Yeah. Depending on what squad mode you play, you can go up against other squads from around the world. Their movements and the way they play against you vary based on how each person has built their character – what weapon they’re equipped with, what perks they have.

GamesBeat: Are the same principles applying here, the same choices between stealth, speed, and heavy armor?

Palacios: We wanted to give players the feeling that they have control over their own destiny in multiplayer. Customization is an important pillar for us, all the way down to the way your character looks in-game, as well as what your equipment is. We revamped the perk system. In the past, we had three different categories and you could choose one perk from each. Now we opened that up, so you have eight points – or up to 11 if you give up some of your equipment – and the freedom to create the player you want. 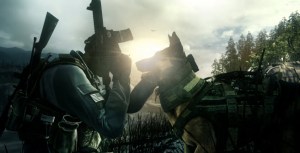 GamesBeat: If you start that way, what are you leveling up to? There are no levels per se anymore, but if you want to get better, get to some destination, what are you working toward in multiplayer?

Palacios: You’ll earn tokens or points to spend on your character. That’s how you unlock different equipment and weapons. You don’t have everything available from the start. You have to play to unlock the things that you want. Each soldier that you customize – you can have up to 10 – when you’re playing with each one, they gain experience, and that’s how we incorporated prestige. Each soldier, when you max them out, that counts as a prestige level. You can prestige up to 10 times.

GamesBeat: One tip for staying alive longer is always “you have to know the maps.” Are the maps designed the same way, or are they designed in a different way this time around, given all these other changes?

Palacios: We wanted to give more variety to our players, so the size of the maps varies a lot. We’ll have 14 maps once the game ships. The team’s been working hard to make sure the flow of the maps feels natural. We looked closely at movement and wanted to improve that, so now you can lean around corners with what we call contextual lean. How close you are to that corner will determine how far out you lean. Then we have the new mantling system, where you can just run and jump over objects. You can shoot while you’re doing that. We introduced the slide, too, so you can slide into cover or into a crouch, and again shoot during that.

GamesBeat: It seems like there are things that appeal to the skillful player there. They want to try fancier moves and get away from people more easily. I guess there’s something for the new player too, though, because these aren’t hard moves to do.

Palacios: It was important for us to make sure that you didn’t have to push any new buttons to do anything. We wanted to use them in a way that felt natural and familiar to people who have played Call of Duty. We also wanted people who are new to Call of Duty to feel comfortable being able to jump into multiplayer or Squads. We’re bring back private matches, so if you just want to go up against bots, you can do that.