Disney Infinity, an open world platform game where collectible toys represent the playable characters, is a huge enterprise that cost more than $100 million to make and required the coordination of many different Disney divisions and properties. I like its ambition, but I don’t care for the game so far. The title debuted on Aug. 18 for the Xbox 360, PlayStation 3, Wii, Wii U, and 3DS.

But then again, you can’t trust my judgment. I wasn’t a big fan of the first Skylanders game from Activision. That game series went on to sell more than $1 billion worth of toys and games. It was a stroke of brilliance, and I just wasn’t the right audience for it. I look at Disney Infinity in the same way. Disney Infinity could well go on to be a blockbuster that breathes new life into both Disney’s video game business and bridges its toy business into the digital realm. The core demographic of young kids could very well turn this into one of the hottest games of the year. And Disney’s brands might very well crush the Skylanders’ momentum. Your kids might prove me wrong.

Like Skylanders, the game lets your kids combine playing with toys and playing a video game. You plug your base into your console, as I did with my Xbox 360, and then you set a toy on the base. The toy character transfers into the game and launches the themed environment for the character’s world, such as Toy Story. Then you can either play a narrated mission campaign or play with the character in an open-ended world where you can create anything you’d like.

Avalanche Studios has worked on Infinity for more than three years so that it can deliver a magical experience for Disney fans. But I feel Disney Infinity falls short in providing the kind of intelligent humor and engagement for adults that you find in Disney films. Disney’s entertainment is typically multi-generational, with people of all ages enjoying films from Pixar. But Infinity is too poorly executed to be loved by hardcore gamers and adults looking for a fun experience to share with their kids. You may very well sit alongside your young kids, maybe around the six to nine age group, for hours upon hours. But as the adult in the room, you’ll be silently groaning.

At the same time, Disney really has something cool going in the Toy Box, where users can generate their own Disney-themed content and mix characters from different stories. The introductory interactive video for the Toy Box is aimed at sparking your imagination and it is so well done it could bring tears to your eyes. It will show you all of the characters you can play and the endless variety of things you can do in the Magic Kingdom’s digital realm. This is the part that will make you feel like a kid again, as if you were mashing up characters from different stories on your living room floor.

Overall, players can indulge in Infinity for hundreds of hours if they fully invest in all the toys and content. Disney is releasing six “play sets” at the launch. These play sets have different themes but they’re essentially six full games. The base platform comes with three toy characters with three play sets — Sulley and Monsters University, Mr. Incredible and The Incredibles, and Captain Jack Sparrow and Pirates of the Caribbean. You only have to buy the base once. You can add to the experience and the play sets available by purchasing new toys. More play sets on the way include Lone Ranger, Cars, and Toy Story. 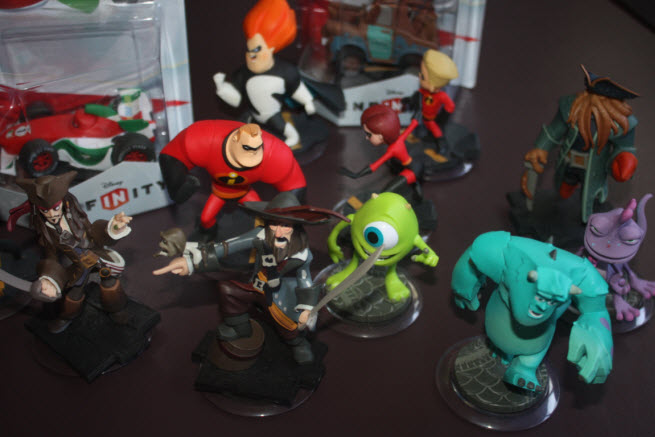 The huge variety of play

Disney Infinity is a massive game, and it is infinitely extensible. The $75 starter pack comes with a base and three characters, the Toy Box mode, and multiplayer play. That’s an enormous amount of content, considering that each play set has somewhere around eight hours of gameplay or more. You can unlock more items in the gameplay and then those items become available as accessories. The toys are beautiful and well made. Online multiplayer is another way to extend the experience with your friends.

Each world has its own set of cute items that drive a lot of gameplay. There’s a toilet-roll shooter gun and a paintball gun in Monsters University, a hover board and a glider pack in The Incredibles, and a pistol and sword in Pirates. You’ll use these over and over again as you come across various enemies in the worlds. As you collect more tokens, you can go to the Toy Store and purchase new items that will help you. Some of these, like a joke launcher in Monsters University that will slap you in the butt and send your character flying, are necessary to advance to new areas in the play sets.

The worlds themselves are big enough where it would have been nice for Disney to include a map of each one. The plus side is that these worlds add to the variety of the game. In the multiplayer play, you can download new Toy Box worlds created by Disney, such as a replica of Disneyland itself, or share your own Toy Box creations with others. You can play in Toy Box worlds created by friends. If they’re better than what Disney has created, then that’s a big bonus. Disney Infinity is just at its beginning, and by the time it’s in full swing, we should see an enormous amount of content available. 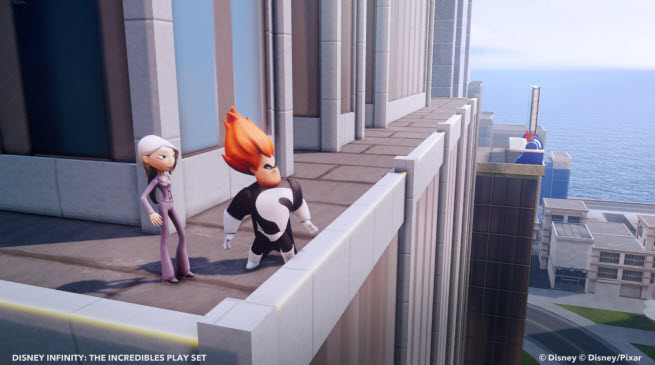 Each play set is a long game

The play sets provide plenty of entertainment and replayability. My kids and I plowed into the Monsters University play set and we found no end to it. There are always new missions to pursue and new toys to earn in the Toy Store, based on your achievements. The side quests get confusing, but the game has some nice cues to keep you on track, such as arrows that point you to your destination. If you view the game with a collector’s mentality, where you want to pick up everything and replay areas with different characters, then you’ll spend a lot more time than you normally might in a game of this nature.

I was surprised that there was as much to do in each of the play sets given the big range of estimates for how long it would take to complete them. Each play set also introduces a different kind of gameplay. In The Incredibles, you have superhero gameplay such as fighting, flying, and driving cars. In Pirates, you have swordfighting, bomb throwing, and sea combat. And in Monsters University, you climb buildings, shoot the toy guns, and scare critters.

The highlight of the game is Toy Box mode, an open, virtual world where you can mix and match characters from different stories and create your own world. You can try your luck in a kind of slot machine to get 25 different pieces of content to populate your world. You can also access a big library of about 1,000 pieces. You can also add a theme to the world by adding discs that you purchase. You can add the Tangled disc and the world will suddenly be adorned with the decorations from the world of the Tangled movie. The major set piece in Toy Box is Cinderella’s castle. But you can modify the world as you like, changing the props, landscape, and objects in the world to suit your taste. It’s sort of like Second Life, but with a much simpler set of tools for customizing the world. Besides setting down objects, you can connect them logically. You can put a soccer ball in the world and set up a goal. When someone kicks the ball into the goal, you can set off a fireworks display. With the logic rules, you can pretty much create your won games within the Toy Box.

Toy Box has different modes itself. In the Adventure Mode, you can win new items to add to the collection of objects. This is the part where Disney differentiates itself from Activision, whose Skylanders toy figures are not used much outside of scripted missions or challenges. You can create environments in forests, race tracks, cities, underwater places, and more. Toy Box mode is as good as your imagination.