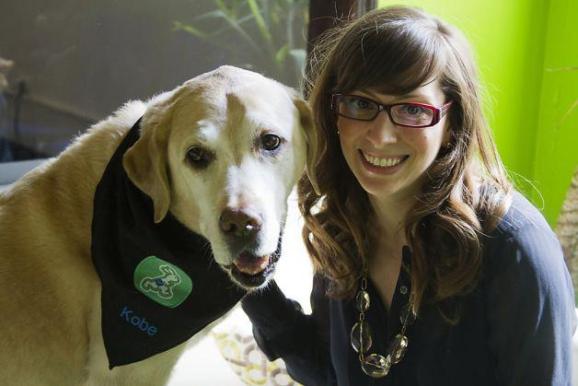 Founder Leah Busque and Kobe, the dog who inspired TaskRabbit.

TaskRabbit is scampering into five new cities today and announced that it is on track to gain 1.25 million new users this year.

The five new cities have over 2,000 new TaskRabbits, and TaskRabbit’s army is now 15,000 strong. These TaskRabbits perform tasks and run errands for users, such as building Ikea furniture or picking up your dry cleaning. The marketplace helps users accomplish tasks that they don’t have the time, motivation, know-how, or resources to do on their own and provide TaskRabbits with an extra stream of income.

TaskRabbit was founded in 2008 by former IBM engineer Leah Busque. The story goes she ran out of dog food on a cold February night and didn’t have time to buy more before a dinner date with her husband. She realized that a service that connected people in situations like this would be extremely useful, and thus TaskRabbit was born. It has since grown into a national phenomenon and it’s one of the hallmark examples of the “sharing economy.”

The sharing economy takes advantage of the Internet to make use of underutilized assets. People who have available time, knowledge, or property, such as a car or spare room, can put those assets to work. Even five years ago, the idea of letting a random person on the Internet stay in your home or get in the car with you seemed crazy and potentially dangerous. However, the rise of social networking and crowdsourced information adds in a layer of identity verification and accountability that helps people trust each other.

TaskRabbit was one of the first companies to enter this sector. Building out a vibrant two-sided marketplace is a challenge, particularly when services need to be available on-demand. The company has been steadily adding in new markets and services over the past five years, helped along by $37.7 million in venture capital.

Since then, a number of competitors have cropped up, including Postmates, Exec, TaskHero, and more niche providers like Zaarly. The popularity of these services represents larger trends happening right now in the tech world and beyond. With high rates of unemployment, people are increasingly looking for alternative ways to make money. Many of the TaskRabbits, Lyft drivers, or AirBnB hosts you meet are in-between jobs or using these services to make extra cash while they follow other pursuits, like school or a music career. There has also been a lot of discussion about the next wave of the Internet, which is all about driving offline interactions. Social media dominated the last decade, and now people are looking to online platforms to provide meaningful experiences in the real-world.

Rachel Botsman wrote a book called What’s Mine Is Yours: The Rise of Collaborative Consumption. She estimates that the consumer peer-to-peer rental market will become a $26 billion sector and that the sharing economy is a $110 billion market.  It is growing fast as Internet penetration increases around the world, and people become more comfortable with the idea of “disownership.” TaskRabbit gained its initial traction in early adopter markets like San Francisco and New York, but is now making its way deeper into the mainstream. The company has also made a big push on mobile and is currently working on a revamp of the iOS app, a native Android app, and an app for TaskRabbits by the end of the year.