Remember in 2010 when publisher 2K Games announced its contribution to the traditionally strategy-focused XCOM franchise? And that it was a first-person shooter? And then everyone lost their minds because that was one of the most baffling genre shifts possible?

The Bureau: XCOM Declassified is not that game.

This title from developer 2K Marin, which is out Tuesday for the PlayStation 3, Xbox 360, and PC (I reviewed the 360 retail version), takes players back to 1962 and the founding of the top-secret alien-busting XCOM organization. It ditches the series’ usual overhead view and turn-based tactics in favor of a more action-centric cover-based shooter with squad management and strategic elements. Other than the fact that you’re still fighting aliens, and a little shield icon indicates cover, The Bureau strays pretty far from the well-tested and beloved XCOM formula.

And it’s basically what the franchise needed.

The Cold War was also in full swing, and this political climate lends itself well to stories about alien invasions (see also: every alien-invasion movie from the ’50s), especially when some of those sneaky buggers can disguise themselves as humans and walk around undetected. You know, just like Commies did all the time.

The Bureau works in this undercurrent of paranoia and distrust through memos from XCOM director Myron Faulke, which include questions to determine whether the fellow next to you is a human or an insidious spy. The tests include asking the respondent to recite the Pledge of Allegiance — taking particular care to note if he stumbles or scoffs at the phrase “Under God” — and asking what sound a dog makes. You know, questions only a true, red-blooded  human being would answer correctly. Coupled with elements like XCOM’s “big board,” which illustrates the spread of Outsider influence with tiny red bulbs, these convey the era in subtle, effective, and just plain cool ways. 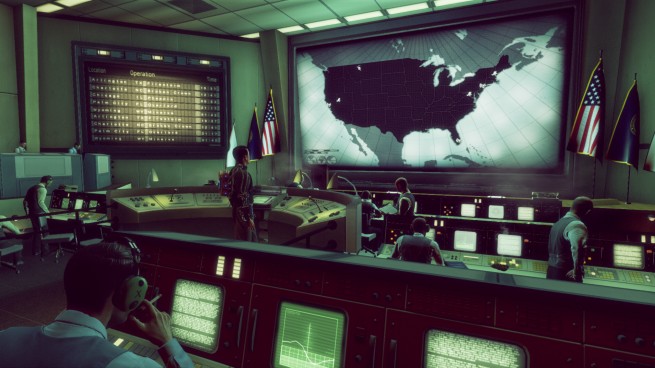 Battle Focus is the workhorse of The Bureau’s combat. While engaged with the enemy, you press a button to pull up a radial menu that looks an awful lot like the one you use to issue commands to your squadmates in developer BioWare’s space-opera Mass Effect series. And you use this menu to issue commands to your squadmates, like telling them where to move, which enemies to target, and which special abilities to use.

Unlike Mass Effect, however, activating Battle Focus does not pause the action; it just slows it down. So while you’re trying to decide where to move your guys and what they should do once they get there, the enemy keeps doing what it was doing, just not as quickly.

You can also stack commands, so if you want a guy to move into a flanking position and then target a specific enemy, you can do so. Commands execute in the order in which you set them, so it’s possible to line up a ridiculous series of events and then watch them play out. Sticking this tactical element into the middle of a third-person shooter is great for mixing up the pacing. You can occasionally (and barely) succeed with a run-and-gun approach, but most situations require you to slow down and think for a minute, leading to a syncopated play rhythm that is consistently exciting.

Above: Healing occurs by way of soothing aerosol.

XCOM as a series tries to constantly provide players with interesting decisions to make. In Enemy Unknown, do you do a mission in China that will get you more scientists to develop gear for your team? Or do you opt for the one in the U.S. that will get you more money? Neither choice is necessarily right; it all depends on your style and priorities as a player and how you weigh the negative outcomes of the choices you don’t make against one another. Declassified keeps this tradition going by cramming as many options as possible into every aspect of it.

Take character creation. You have four classes to choose from, each with their own strengths and abilities. Once you pick a class, you choose one of several backgrounds for your new recruit. The different backgrounds give the new guy bonuses in different areas, like additional health or a shorter cool-down time on his abilities. Later on, you’ll select his equipment from weapons he’s trained to use and over a dozen backpacks, each of which bestows a unique ability on the wearer.

Once you’ve had your guy out in the field for a while and he’s leveled up, it’s time to pick his abilities. Each squadmate can gain four levels, and he gains a new power at each. Some levels unlock a single upgrade, but some make you choose between two similar ones. More superficially, you can also choose your character’s appearance, clothing colors, and name. At every step, you’re designing your personal customized squad that will look and fight exactly as you want it to. They granularity of creation makes you feel like you trained these guys yourself, and it makes you feel like you really own your squad. And that’s great, but it leads to some potential heartbreak later on.

Declassified also presents choices as the story goes on. Some of these are straight-up “You can only save one character” moral quandaries, but at one point, you also decide whether to evacuate a man infected with an incurable alien disease or let him blow himself up to make the next fight easier for you. I went with the former, and I felt this choice throughout the rest of my playthrough. The decision wasn’t over as soon as I made it; it continued on and affected other things later on. And that’s basically how a developer does moral choices correctly.

Above: Sneaking up on a group of enemies without them seeing you grants you some extra time to plan your first attack.

Declassified’s predecessor, the proper strategy entry Enemy Unknown, had “chessboard tension” — its “Oh, no” moments came from looking down at your squad’s positions and realizing that you’d made a huge tactical mistake three rounds ago, and you don’t know how to fix it. The Bureau’s tension is more direct; its sticky points come from frantically trying to issue the correct orders to your buddies while waves of enemy troops slowly close in on you.

But the relentless march of creeping death isn’t the only source of nail-biting and/or pants-dampening. The Bureau also includes two features that promise to hold you accountable for everything you do: autosave and permadeath, which you can’t turn off. The former is nothing new nowadays; many games save as you go to streamline the experience. But when you add to that the idea that a character you have spent most of your time with, cultivating and carefully selecting his abilities for maximum effectiveness and in concert with the rest of the squad, can just die and be gone forever, and then it will save itself just to make sure he stays dead? That’s called incentive not to mess up.

Permadeath is nothing new in games, of course; The Bureau essentially defaults to Enemy Unknown’s “Ironman Mode,” which prohibits multiple save files and autosaves after every turn. But The Bureau starts on that mode, and it isn’t even a mode; it’s just the way it is. And that’s kind of amazing.

Above: Giant glowing alien seed orbs are why we can’t have nice things.

During a massive firefight in the final level of The Bureau, Jimthro Gunniman fell down. This had happened several times before; we’d been fighting together since the second mission when I recruited him and gave him that stupid name. But this time, I didn’t make it over to revive him before he bled out.

The “DEAD” text appeared in his section of my heads-up display, and I had to pause the game for a minute to deal with it. He was gone forever. Crap.

I was playing on a lower difficulty, so The Bureau prompted me to bring in someone to replace my fallen friend. I picked someone with the exact same skill set and brought him in. He was functionally identical to Jimthro Gunniman in every way.

But he wasn’t Jimthro. He stank of New Guy. I didn’t give him as many orders at first because I didn’t think he’d proven himself yet. But he was, for all intents and purposes, exactly the same guy.

This is what permadeath does; it attaches you to your characters and makes you want to take care of them. And The Bureau handles this as well as I’ve ever seen it. Every close call, every mad dash to select my “Heal” ability, and every time I moved a seasoned veteran out of danger drew its power directly from my connection to my A.I. teammates. I could always replace them, sure. But I didn’t want to.