Depending on your attitude toward minor gameplay glitches, this could be a good or bad thing. But The Bureau is occasionally a very buggy game. Sometimes they’re jarring, like when the end of one character’s line of dialogue does not quite inform the beginning of the next character’s reply. Sometimes they’re confusing, like when everyone was talking about a guy I chose to save as if he were dead. And occasionally, they’re downright confounding, like when I spoke to a doctor, left the room, came back, and the doctor had the armory officer’s head on his body. He still sounded like the doctor, but he looked like the guy from the armory, and I have no idea why that would ever happen.

This confused me so much that I took a picture of my television screen. 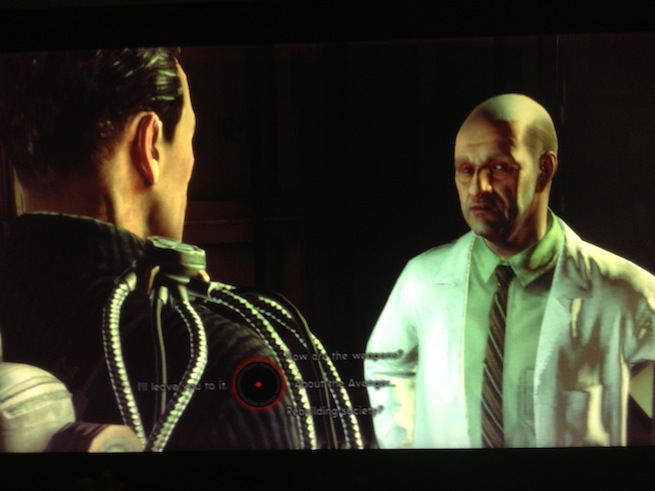 Above: THAT’S NOT HIS HEAD.

Declassified isn’t always completely clear about what it wants you to do or what it’s doing in the background while you’re playing. Between main story levels, you can send agents off on “dispatch missions” so they can level up and gather more supplies. They’ll come back more powerful, and you can give them new abilities without having to constantly rotate the members of your go-to squad of three.

The problem is this: Unlike the real-time countdowns that similar modes in games like Assassin’s Creed: Brotherhood use, The Bureau doesn’t tell you how long the missions will take, so you have no idea when you’re going to have those guys back. Sometimes they came back after a minor side mission, and sometimes they were gone until I’d finished the next part of the plot. All I knew was that at some point, I would return to base and they would be there waiting for me to teach them how to throw turrets or something, but I had no idea when that might be. It would be nice to know when I’d have my Level 4 Engineer and his trusty mines back, but Declassified seemed to consider that information above my pay grade.

The One Save to rule them all

I know I just got done talking about how awesome the permadeath and autosaving were, but do you know when a manual save really comes in handy? When it’s 1:30 a.m. and you want to stop playing instead of pushing through to the next checkpoint. Or if you’re interested in how the consequences of your choices work out without having to play through the whole thing again. What if your game freezes in the middle of a lengthy side mission? It never happened to me, but I saw enough glitches that I was often worried it would happen. And if it did, I’d have to go through all that dialogue again.

Theoretical technical issues are not valid criticisms, but they do detract from one’s enjoyment. The lack of a manual save also means that you’re almost always playing at The Bureau’s pace instead of your own, and sometimes people just have stuff to do.

I’m avoiding spoilers here, but at one point, The Bureau becomes less a story about pomade-slicked G-men shooting aliens in the dome and more of a bizarre cosmic daytrip. In the final act, the plot takes such a weird turn that when I finished watching a particular cinematic and found myself back in the  game, I had to remind myself what I was playing.

This twist doesn’t ruin the story, and it does fit in somewhat with the series’ larger mythology, but I wasn’t sure if the developers were trying to make a BioShock-style comment on the nature of video games or if they’d just programmed one of their fever dreams into the code.

The Bureau is Enemy Unknown’s hyperactive younger sibling who delivers something different while still fitting in well with its predecessors. A lot of people were worried when we saw that first-person shooter at E3 2010, but the developers have taken the core idea of “try something else” and come up with a fun, interesting game that still fits in with its slower, more strategic relatives.

The Bureau: XCOM Declassified is out Aug. 20 for PlayStation 3, Xbox 360, and PC. 2K provided GamesBeat with an Xbox 360 retail copy for this review.