[Corrected 1:15pm Pacific] Oftentimes when you see a tweet on Twitter or see a tweet as part of news coverage, there’s something missing. That something is context.

The folks at Twitter appear to have realized this and the service will now usually include a “related headlines” section that is viewable if you look at a specific tweet’s permalink page. Ideally, by providing headlines and links to other sources that are related to the embedded tweet, it makes it much easier to see the whole story.

Update: Our post originally said that the related headlines would also appear on tweets that have been embedded in webpages. That is incorrect — related headlines, which are selected from web pages that have embedded a tweet, only appear on that tweet’s permalink page. Unfortunately, Twitter’s blog post led many others to the same (incorrect) initial conclusion we made.

Starting today, you will see a new “Related headlines” section on Tweets that have been embedded on websites. This section, which you can view from the Tweet’s permalink page, lists and links to websites where the Tweet was embedded, making it easier to discover stories that provide more context.

This year when NBA center Jason Collins became the first NBA player to publicly come out, the news traveled quickly on Twitter. As outlets like ESPN, MSNBC and sports blog Bleacher Report reported the story, they embedded @jasoncollins34’s Tweet and then provided additional context that wasn’t available directly on Twitter.

Here’s an example of a prominent sports tweet if it had included related headlines: 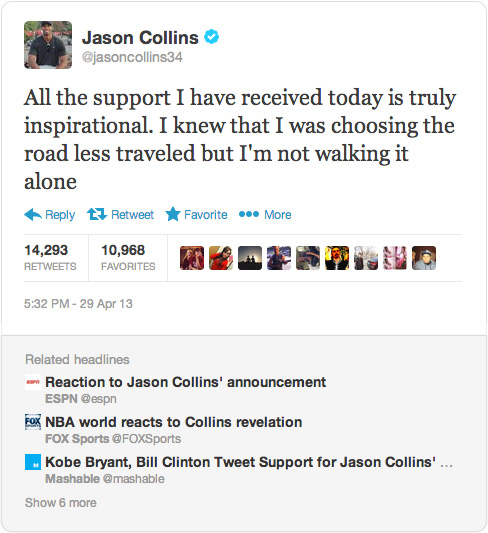