The one thing that we all expect from next-generation video games is better visuals. New home consoles are supposed to mean better graphics. One of the companies leading the way to ensure that this is still the case is developer Silicon Studio with its Yebis 2 post-effect middleware.

Middleware like Yebis 2 is a software solution that developers can pop into their game engines without much effort. In the case of Silicon Studio’s product, it provides a suite of visual tricks, options, and settings that improve and alter visuals and lighting. These enhancements are called post-effects because a programmer can flip a switch to implement an effect on an otherwise finished game.

Silicon Studio released the following trailer to give developers an idea of what is possible with Yebis 2:

“Yebis 2 is the result of 10 years of research and development,” Silicon Studio president Takehiro Terada told GamesBeat. “We were focusing on high-dynamic-range lens rendering since 2003, when the original Xbox was in the market.”

But as a game developer, Silicon Studio was only able to take advantage its powerful tech in a small number of titles. The company is responsible for games like 2009’s 3D Dot Game Heroes for PlayStation 3 and 2012 Japan-only release Bravely Default: Flying Fairy for 3DS.

Now, Silicon Studio is finding that a market exists for tools that can do exactly what it developed in Yebis 2.

“We found that people were looking to use that HDR technology on Xbox One and PlayStation 4, but most of the research comes from our engineers,” said Terada. “Many books [that explain how to do these effects] refer to our technology. We developed the basic techniques.”

Terada and Silicon Studio decided to package up its HDR tools along with a bunch of other camera-emulating tools and is selling it to other game developers.

“Because we spent 10 years developing this, we have more advanced techniques to improve the quality and speed of the effects [than anyone else],” said Terada. “That’s what makes Yebis 2 so different from similar tools, and we’re the only middleware that focuses entirely on post-effects.”

In addition to high-dynamic range, which is the concept of capturing a greater range of light in an image, Yebis 2 can also help developers create motion blur, lens glare, depth-of-field, light bloom, and more.

“The goal was always to create accurate camera simulation,” said Terada. “All of our effects are based on what a camera would see. If someone knows cameras very well, they can see how realistic the settings of Yebis 2 are. Of course, we have an easier version of the settings for artists or programmers that aren’t familiar with the cameras that we are emulating.”

In fact, ease-of-use is one of the big things about Yebis 2. The post-effects can have a dramatic impact on the look of the visuals, but it’s easy enough for artists to quickly and effortlessly adjust without much worry.

“Yebis 2 just needs the information from the game and with that it can render many kinds of effects,” said Terada. “It can do the HDR rendering. It can simulate real-world high-dynamic lighting effects. It can also do depth-of-field and motion blur — those kinds of things. The developer only needs to pass [a bit of information to Yebis 2] and then they don’t need to worry about anything else.”

So far, Silicon Studio isn’t revealing the developers that are using Yebis 2, only saying that Square Enix implemented it in the Final Fantasy XV announcement trailer, which you can see below:

You can see that the new Final Fantasy features bursts of lighting and snazzy lens effects. That realistic shine and shimmer is due to the Yebis 2 middleware.

As impressive as Final Fantasy XV looks running on the PlayStation 4, Silicon Studio’s Yebis 2 can scale down to run on mobile devices as well. In fact, the developer just released its Mobile GPUmark app on the Android Google Play market to show its effects running on cellphones.

“Because we started on the original Xbox — which wasn’t very powerful — and we discovered a way to simulate those visuals effects on that device, we were able to move those effects to the mobile version of Yebis 2,” said Terada.

The Yebis 2 technology will work best with the OpenGL ES 3.0 graphics drivers that Google announced for the latest Nexus 7 tablet running Android 4.3., but anyone can download Silicon Studio’s benchmarking tool to get a small idea of what YEBIS 2 is capable of. It doesn’t run very well on my older Nexus 7, which has an aging Tegra 3 graphics processor. 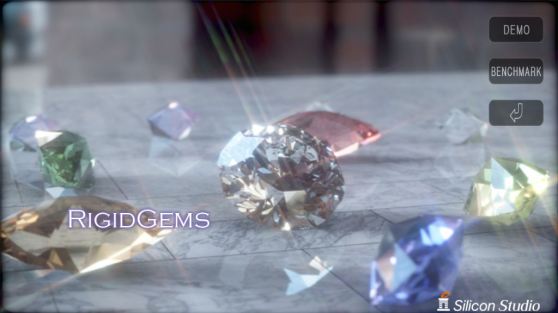 Silicon Studio is hoping to simultaneously capture both next-gen and mobile developers. As game-creators look for ways to make their games visually pop, it’s likely that something like Yebis 2 is the answer. The company told GamesBeat that is already has heard plenty of interest from Japanese studios.

Next, Terada hopes to convince some Western developers to adopt the YEBIS 2 tech. He said that some European developers are expressing interest, but he also wants to get American developers using his tech.