Edward Kenway is a master assassin. He can slice targets with his two swords, shoot them with one of the flintlock pistols strapped to his chest, or take them down silently with his hidden blade. But all those tools and weapons mean nothing when he’s facing his greatest foe in the Caribbean Sea: the shark.

Sharks guard the lucrative shipwrecks scattered throughout Assassin’s Creed IV: Black Flag (out on Oct. 29 for the PlayStation 3, Xbox 360, and PC, and later for next-gen consoles). Outside of designated harpoon zones, you can’t kill them — if they start attacking you, you can only fight them off long enough to swim away. It’s a thrilling inverse of the hunt-and-kill gameplay that the third-person action series is usually known for.

I explored a small part of Black Flag’s open-world during a hands-on demo (a PlayStation 4 build running on a PC) shown last week in San Francisco. True to Ubisoft’s word, I saw zero loading screens as I sailed from one area to the next, boarded damaged ships to steal cargo, and swam in shark-infested waters. Similar to the other Assassin’s Creed games, Black Flag’s setting — 18th century life in the West Indies — required six to eight months of exhaustive research before the developers could start building a place where pirates and shantytowns were the norm.

As I soon learned from speaking with lead writer Darby McDevitt, however, the historical records weren’t always reliable. 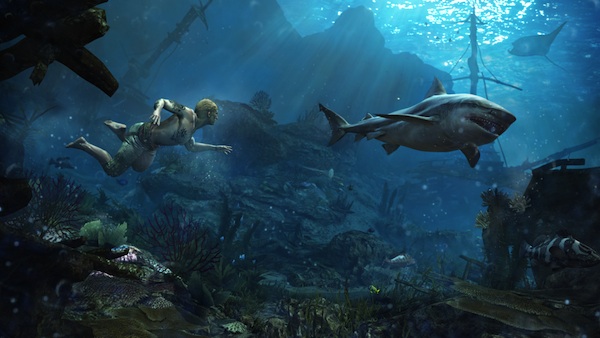 Above: In addition to sharks, you’ll also face other forms of marine life — such as whales, sea urchins, and eels — as you plunder chests filled with gold and blueprints for ship upgrades.

One creative challenge the team ran up against was that despite Black Flag’s focus on the Golden Age of Piracy, none of the infamous pirates it covers actually wrote about themselves. This was far different from the aristocrats and scholars of the Italian Renaissance (the setting for Assassin’s Creed II and Brotherhood) or the generals and politicians during the American Revolution (the backdrop for last year’s Assassin’s Creed III), who left a ton of written material behind.

“[Pirates] were probably illiterate — most of them,” said McDevitt. “They didn’t keep records. … We actually landed right in a place where we had to make up a lot of stuff. Or at least speculate on a lot of stuff in terms of where these guys were and what they were thinking and what they were doing. But there’s enough that we got pretty accurate, like a lot of the major pirating events. Blackbeard, for instance, very famously laid siege to Charleston, South Carolina, and for seven days just sat outside the harbor and took everyone hostage until they gave him what he wanted. That’s on record. He didn’t write about it, but a lot of people in Charleston did.”

McDevitt and the developers, as well as the historians before them, had to rely on eye-witness accounts — people who were lucky enough to survive an attack or capture — to shape their understanding of pirates. The victims would then sell their story to a local newspaper or alert other towns of the threats that the pirates posed. But sometimes, as the saying “history is written by the victors” goes, these writers can have other agendas, so their accounts may not seem trustworthy. 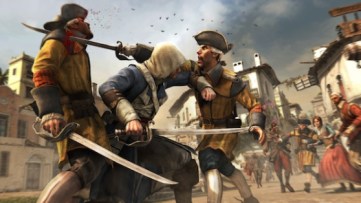 Above: Kenway is a ruthless fighter.

“That’s actually a really good observation because at the very end of Blackbeard’s life, when they wanted him dead, [people] started spreading tons and tons of rumors about him, which some researchers felt were probably unfair,” McDevitt said. “There was this rumor that he had 14 wives, which probably means he just had lots of girlfriends, but that he also married a 13-year-old girl and let his entire crew sleep with her on their wedding night. That was one of the rumors spread about a month before he died.

“He actually did not like violence. He didn’t kill anybody until his very last confrontation. It’s fairly unlikely that he was actually that cruel.”

As you help create Kenway’s legacy (he’ll eventually meet Blackbeard and other notorious pirates), he, too, will come across outrageous rumors about his reputation. McDevitt described a scene where he overhears some guards trying to figure out his actual name while they talk about the rumors surrounding him. 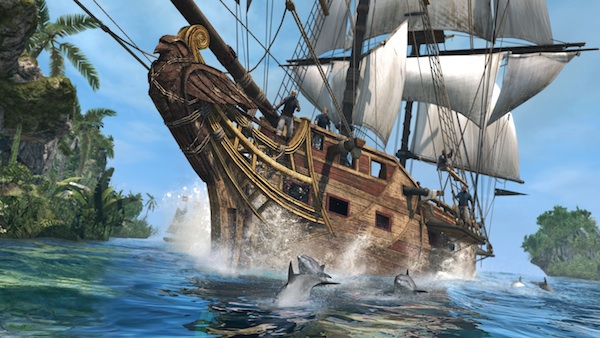 Above: You’ll sail around the Caribbean using Kenway’s ship, The Jackdaw.

In other cases, researching can help fill in some holes as the story takes shape. It’s how Nassau, the capital of the Bahamas, ended up in Black Flag.

“[The designers] didn’t even think about Nassau, because it’s not a massive city,” said McDevitt. “It’s not historically beautiful in the architecture sense. But when you do the research, you realize, ‘Hey, this is where all the pirates lived. All of them, at this time.’ So we needed the city.”

I didn’t visit Nassau, but I did run around Havana, another one of the large cities. Once you sync with each place by climbing tall buildings to survey the land, you can use them as fast-travel points, which is great if you’re coming from the opposite end of the map. While there, I helped out a young woman by fending off waves of enemies with explosive barrels. I also saw (and failed to save) a few men being executed at gunpoint. If you do manage to keep them alive, they’ll join you on the Jackdaw.

What I didn’t see were stereotypical pirate tropes common in popular culture: crossbones, hooks, and walking the plank. Ubisoft made a conscious effort to stay away from the romanticized view of pirates in favor of creating a “grounded sense of realism, of brutality.” They looked to films and TV shows such as Master and Commander, The Mission, and Deadwood for inspiration.

“It’s hard to look at the more popular pirate movies and get inspired because what they do is they explicitly say ‘We’re making a pirate movie,’” said McDevitt. “And the set direction is all about pirates: There are skulls on everything and everything is dark. … And we’re making a game set in the early 18th century in which you play a pirate. But we want — when you wander through Havana –we want it to look like how citizens in Havana live there and work there. In Kingston, people work in plantations.

“There are pirates in this world, but it’s a much bigger world than just pirates.”

One person on the team did want to bring back the hidden hook blade (last seen in Assassin’s Creed: Revelations), but McDevitt was quick to answer with a firm “No!”