Fighting games live or die by their controls. If they’re too slow or unresponsive, players will ignore it and move on to something else. So when a developer ditches the controllers in favor of motion-based commands, they’re already raising a lot of eyebrows.

Fighter Within (a launch title for Xbox One) attempts to make another case for motion fighting games by relying on Microsoft’s upgraded Kinect sensor. You and a friend stand either on the left or right side of the camera as you try to beat each other into a virtual pulp. It’s being made by the Belgium-based Daoka, and included in its ranks are developers from AMA Studios, who were the folks behind Fighters Uncaged and other games for the original Kinect.

While this means Daoka has had some experience creating motion games, having Fighters Uncaged in their résumé doesn’t instill a lot of confidence. Critics had a variety of complaints about that game, with the most popular ones being its inaccurate controls and a laughable presentation. I’ve never played Fighters Uncaged, but in light of its poor reception, and executive producer Luc Verdier’s promise that the “fantasy we all had about [the first] Kinect and motion fighting games is finally happening,” I thought it’d be fitting to see if Daoka addressed those criticisms in Fighter Within (as based on my limited time playing it). 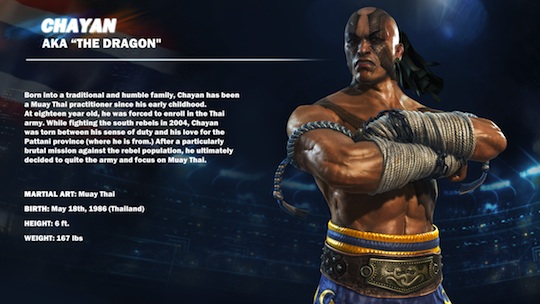 Above: Chayan was one of a handful of characters available in the demo.

Fighter Within was easy to grasp once I jumped in. At first, the responsiveness was great: Whenever I threw a punch to the face, my character would do the same. If I punched lower toward the ribs and stomach, the avatar followed suit. And once I landed enough hits in a row, I created a combo.

With the improved tech in the Xbox One’s Kinect, Verdier explained that all upper-body movements uses 1-on-1 tracking. “What we use is procedural animation — micro-animations to replicate your moves,” he said. “For the lower part of your body, we do not expect people to jump and do high round-kicks, so we’re triggering animations.”

If you want to move forward, you just lean your upper body to the front; to move backward, you lean back. And blocking is just a matter of raising your elbows to the parts you want to protect. Special attacks appear on the bottom of the screen as card-like displays showing what you can do. But before you can use them, you have to charge up your character’s chi by raising your arms to the sides, Super Saiyan-style.

The problem came when the new Kinect didn’t seem to recognize some of my special attacks — which includes movements like crossing your arms in an X or lifting your leg — toward the end of my match. They eventually worked, but considering how much more powerful the new Kinect is over the old one, this is a disappointment. Ubisoft representatives suggested that the camera was probably picking up the people behind us (who were standing a few feet away) and had trouble tracking me.

If nothing else, Fighter Within at least looks like a next-gen fighting game with its detailed character designs and stages. Each of those levels have different objects you can interact with. When I played, I was in some sort of tropical setting, and my opponent kept smashing me into a piece of scaffolding made of bamboo. In other places, as seen in the video at the top of this page, Chayan jumped off a pole to deliver a devastating punch from the air.

Since you are throwing punches and kicks in front of a camera, Fighter Within still doesn’t solve the fact that everyone looks awkward when playing it in front of other people. But that does fade away once you get into it. And in spite of some detection issues, I did have fun. I can’t say for sure if Fighter Within is as revolutionary as Daoka claims, but it does seem like it’s on the right path.