MALMÖ, Sweden — Reading books on my tiny iPhone screen is something I do out of circumstance, never by choice. (For example, I decided to read fellow staffer John Koetsier’s new sci-fi novel on my smartphone during a layover on a recent international flight because my iPad was buried in the middle of my luggage.) And apparently, I’m not the only one, according to e-reader startup Readmill. 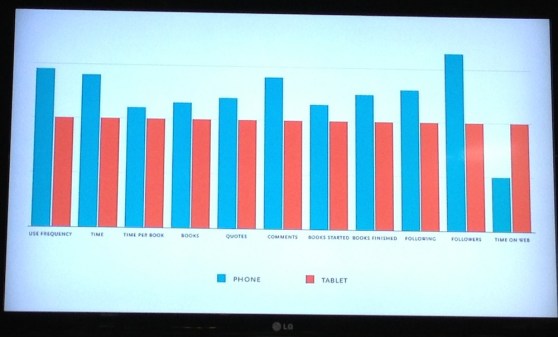 Above: Readmill’s slide showing book-reading activity on phones and tablets.

The Germany-based Readmill produces a mobile e-reader app for books on iOS that offers a better reading experience than Apple’s native iBooks app. It has support for Adobe DRM-protected ePub and PDF formats. (It’s got enhanced social, sharing, and book recommendation features that makes it stand out, too.) One of its primary sources of revenue includes selling data about reading activity to publishers, digital stores, and developers — so I’m inclined to believe the startup’s observations about smartphone usage is sound.

After seeing the data, I kind of understand why smartphones could be the future vehicle for books. The one thing holding me back from smartphone reading is definitely the subpar reader experience compared to tablets, which Readmill is trying to improve.

Another thing I found interesting from Berggren’s talk was the amount of time it takes people to finish a book in different regions. Readmill has more U.S. users than any other region, followed by Germany. I honestly thought Americans were probably among the slowest readers, but that’s not the case. 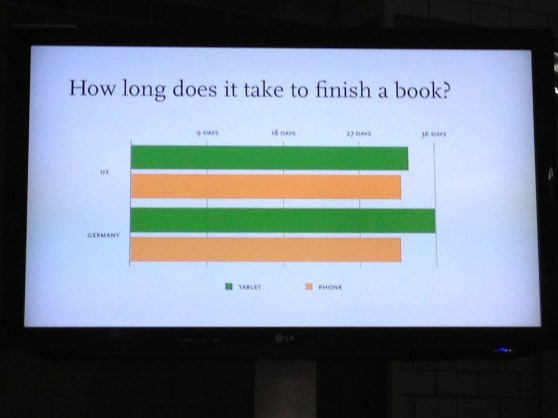 According to Readmill’s data, Americans spend about 30 hours per book while Germans take 36 hours. (Go USA?!) Part of that might have something to do with Germans reading books while on their commute home using public transportation, which obviously means they’re going to have many more distractions in between reading.