Ubisoft showed off its new online play for its Just Dance 2014 game, which is part of a hot franchise that has sold more than 40 million units to date. 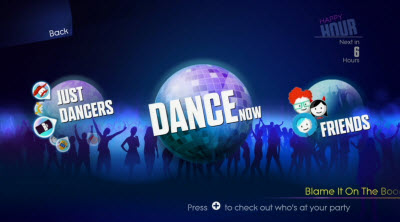 The French game publisher is showing the game at the Gamescom event in Cologne, Germany, but we saw it at a demo in San Francisco this week, where the company showed off new online elements. This is the fifth game in the series that Ubisoft is making, so it has to do something different in order to attract new players. The game includes a classic “free dance” mode as well as an “on-stage mode” where a player takes a featured role and two others dance backup routines. You can also play against ghost renditions of a friend’s prior gameplay.

In the demo we saw, two Ubisoft dancers took on 22 other competitors in various parts of the world in the World Dance Floor mode, where you compete to be the best at doing dance moves in unison with the on-screen directions. You can’t pick the song in this mode, but you can vote on which song will play next. You can basically join a virtual crew and meet new people and dance with them.

The title also has a “party master mode” to give the player controlling a GamePad (on the Wii U) more options to direct the party. People interested in fitness will also be happy to see the “custom sweat” mode designed for exercise and tracking calories.

The game will be available this fall on all platforms including the Microsoft Xbox One and Sony PlayStation 4.