For most people, membership stores like Costco are a mixed bag. While they often save lots of money, they’re not the most enjoyable places to shop — assuming you can even get to them in the first place.

These realities are baked into Boxed, an app that offers all the good parts of the membership store (the savings!)  without most of the bad parts (like the store itself). 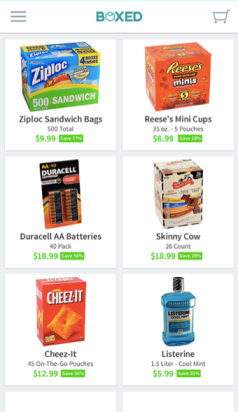 Boxed CEO Chieh Huang, a former director at Zynga, says that because Boxed is a mobile-first shopping app, it’s built to take advantage of the way people actually shop on their phones.

“When you go on Amazon, it just shows you a wall of stuff. If companies do something like that on mobile, they’re going to lose customers right away. People don’t want to scroll through lots of items while on their phones,” he said.

Boxed takes a more measured approach, initially offering users a few products that it thinks will be most relevant to them. “The approach has to be a lot more targeted,” Chieh argues.

At its core, Boxed is built with the realization that smartphone users tend not to have much time or patience while shopping on their phones (assuming they’re doing it at all). This means that the mobile buying experience has to be smart, accessible and well designed — all of which Boxed seems to be so far.

And then there’s the savings. Like wholesale stores such as Coscto, the most immediately compelling thing about Boxed is just how much money using it can save you. Huang says that compared to shopping at the local pharmacy, Boxed saves users an average of 54 percent per unit on most products.

Right now, Boxed is only available in major cities on the East Coast, where customers can expect their orders to be delivered as quickly as the next day. The company expects to expand elsewhere soon, but it’s taking it slow for now.

“We’re a team of nine people. Walmart employs like half the country,” Huang quipped.