Four developers, three years, and a lot of passion. That’s what it took to create the innovative rhythm-based fighting game KickBeat. The kung fu title debuts on Sept. 4 on the PlayStation Vita, and it is the latest title from Zen Studios, an indie game studio based in Budapest, Hungary. 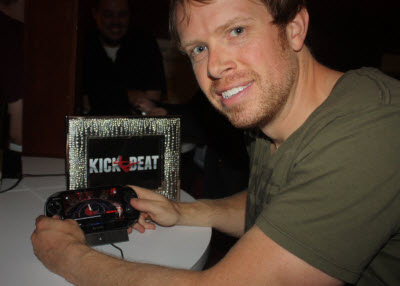 Above: Mel Kirk of Zen Studios

Zen is one of those rarities in the game industry: an indie game development studio that has had a number of repeat hits. It has worked on numerous hit games such as Capcom’s Street Fighter and Tecmo’s Ninja Gaiden. It has branched out into its own original titles such as Pinball FX2, one of the best-selling games on Microsoft’s Xbox Live Arcade. And last year it debuted Star Wars Pinball, the first Star Wars pinball game to hit the game machines in decades.

But it finally had a chance to work on an original game, KickBeat, that was born out of a passion for both fighting games and music titles. Naturally, most publishers said they didn’t want to publish it. But Sony liked what it saw and it opened the doors for publishing on the PlayStation Vita.

We talked with Mel Kirk, vice president at Zen, at Sony’s recent PlayStation Vita event in San Francisco. Our chat covered the making of KickBeat, how Zen became a successful indie, and the choices facing indie developers.

GamesBeat: How did Zen Studios get started and break into the game business?

Mel Kirk: About 10 years ago, Zen Studios started as a technology and work for hire studio. There was a team of 4 guys doing a range of things, such as engine development, middleware tools, and ports for other games. This went on for about 5 years, and the studio gained significant knowledge and experience with console platforms and gaming handhelds.
When PSN and XBLA came on the scene, we found an opportunity to control our own destiny. Zen Studios CEO, Zsolt Kigyossy, is a huge pinball nut, and spent a lot of time playing in the arcades. He set out to make the best video game pinball sim on the market, as there was nothing very good for consoles, or anything sold via digital. Zen managed to develop and publish a decent game, and we were able to make enough to keep it going.
Zen is now at a pivotal point. We are the masters of video game pinball, working with the biggest names in entertainment. This year also saw the release of CastleStorm, which has reviewed and sold very well on XBLA and Steam. September will bring the release of KickBeat on PS Vita and  PS3. Between these three very diverse offerings, I think the studio has shown some pretty dynamic flexibility. Not to mention, we are able to publish on literally every digital channel, and we do all of this in house and all privately funded.

GamesBeat: Can you tell me about how you guys got started on KickBeat?

Kirk: KickBeat has been a long time in development. It’s probably a three-year project at this point. Our creative director, Neil Sorens, and I have been huge fans of music games and rhythm games. We’ve worked on them in the past with other big franchises. We got together and decided on a music game with 3D interactive characters, and a way for people to use their own music in game. We thought up this crazy story for the characters that evolved into a kung fu type of plot.

Kirk: No, it was a crazy idea. The majority of publishers and first-party types said, “This is crazy. It’s never going to work.” Sony said, “Yes.” [laughs]

GamesBeat: So it sounds like it was hard to explain, but you could see it in your heads.

Kirk: Neil had a very distinct vision for the game. He had the creative aspects nailed down, and during development he made sure we stayed with that vision. The music that we used was very important — music that inspires a fighting feeling, that makes you want to go out and kick some butt. Then it was a matter of evolving with the technology. The Vita was a great platform, because it showcases the graphics. You have a multimedia experience in your hand, using your own music. It’s a platform that embraces the indie culture and new ideas.

Kirk: Zen’s been publishing on PlayStation Network now for the better part of five years. We were one of the original companies to self-publish with Zen Pinball back in the day. When we had the idea for Kick Beat, we were shopping it around to see who might be interested, to see if we needed to get a publisher.

We encountered a lot of closed doors. But when we came to Sony — I call it the culture of yes. They said, “Yes. We understand what’s going on here. This is new and innovative. People are going to gravitate toward this game.” It was really easy.

Kirk: Zen is totally self-funded. We control our own destiny in that sense. What we needed was a partner to allow us to take the game out on a platform where we felt it would succeed. Obviously, with the success of Guitar Hero and Rock Band and games like those on consoles, we know there’s a demand for music games — even if those franchises have been kicked to the wayside for the moment. We don’t need to gross billions of dollars to be successful. If we can get a small percentage of that part of the market to try a new experience, that’s all we need. 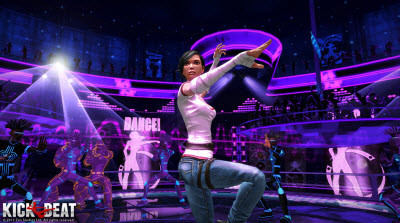 GamesBeat: So you used a small team to make this? How many people?

Kirk: The KickBeat team is probably four full-time guys and three others on and off. Seven people total.

GamesBeat: Was Vita the natural choice here for some reason? Was there a reason why you chose that particular Sony platform?

Kirk: Like I said, KickBeat’s been in development for three years. We were actually working on it as a launch title for Vita. Before Vita was even announced publicly, Kick Beat was in mind for the platform. Here we are much later, and Vita’s done what it’s done. It has some history now. But we’re coming, I think, at an opportune moment. There’s a lot of energy behind Vita, with the price drop they announced today and a ton of killer games coming. It couldn’t be a better time for us to finally make it.

GamesBeat: Describe the action in the game. So you’re pressing buttons to match the beat?

Kirk: Yeah. It’s a beat-matching mechanic. You have 3D interactive characters who are actually your button cues. The game helps you along through the tutorial. By the time you’re playing in an advanced mode and you understand it, the characters light up. They themselves are the beats. You hit the corresponding button — whether it’s a direction or a face button — on the beat, and you’ll take care of an enemy. You have a whole bunch of different combos that you’ll end up using in order to successfully beat a song.