With Windows 8.1, 3D printing is getting two things it desperately needs: standards and simplicity.

Not only is Microsoft integrating 3D printing into Windows 8.1 on a system-level, but it’s even gone so far as to create its own 3D printing format, which it hopes will solve some of the more pressing issues with the technology.

The format, called “3D manufacturing format,” or “3MF,” was the direct result of feedback from Microsoft’s hardware and software partners, many of whom wanted a common 3D printing format that offered more supported features, particularly with color and materials support. 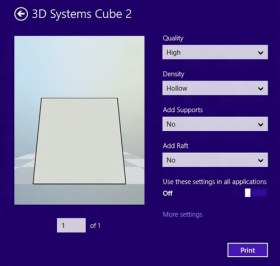 “It’s a lot like the DNA for 3D printing in Windows,” Microsoft says.

As you can see in the demonstration video above, the process of sending a design file to a 3D printer looks to be as seamless as sending your resume to the inkjet printer you own right now.

And that’s exactly the point. If you take nothing else from what Microsoft is trying to do here, understand this: With Windows, 3D printing is going to look and feel just like 2D printing.

That’s a huge deal. While consumer 3D printing is still in its infancy, the technology is already in need an industry-wide push to reduce or remove the most significant points of friction. With Windows 8.1, Microsoft seems to be leading that charge.