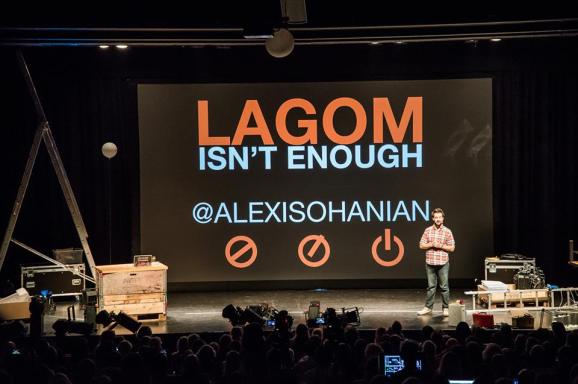 MALMÖ, Sweden — “If you’re not at least a little embarrassed by something you just launched, you probably waited too long to start it,” said superstar entrepreneur Alexis Ohanian to a large crowd at the 2013 Media Evolution conference Thursday.

An example he shared was one of the earliest screenshots of Ohanian’s Reddit profile page, which had a really bland/basic web design, three submitted stories, and a negative 1 karma score. It’ a far cry from today’s Reddit that brings in 4.7 billion page views and 67.3 million unique visitors per month.

The presentation itself was billed as a sort of pep talk for innovators to “give a damn” and mean it when it comes to the people who use and consume what they create. It’s also a subject he’s more than qualified to speak about, too. In addition to Reddit, Ohanian cofounded the nifty travel planning startup Hipmunk and that charitable online store of geeky gifts, Breadpig.

“Don’t ever ask permission to be awesome,” Ohanian said. The statement (coined from his forthcoming book, Without Their Permission) was in reference to the group of prominent people or old institutions that are adamantly against new media/communication creations, which are being used or consumed enough to get mainstream acknowledgement. Basically, he explained that its counterproductive to walk on eggshells while other people point out all the reasons why it shouldn’t or couldn’t work as efficiently as the current standard.

Ohanian used the example of prominent (but unnamed) friends in broadcast journalism, who regarded breaking news from Twitter as unverified, frequently wrong, and an unreliable inferior source of news. Yet those same journalists admitted to reading and actively seeking new information on Twitter first during global events like 2010’s Arab Spring.

“The incumbents are the most clueless because they have the most to lose by change,” Ohanian said, adding that what people are actually doing/feeling/thinking when experiencing your creative work should be placed at a premium. “[But] Twitter didn’t start the Arab Spring any more than broadcast journalists won the civil rights movement. They certainly helped, but they did not do it. People did it.”

Reddit has also experienced its fair share of pushback from those old institutions of media power. During the Boston Marathon bombings in April, a smattering of inspired Reddit members began posting a series of comprehensive timeline threads as new information from plenty of sources (including Twitter, Facebook, and Reddit’s comment threads.) However, it turns out the Reddit community incorrectly speculated on the identity of a bombing suspect, perpetuating the false info until it reached older media institutions that started reporting the info as fact.

From there, those same old media institutions started questioning whether or not Reddit was a service that did more harm than good. (See the New York Times‘ extremely extensive timeline of events regarding what happened in the aftermath of Reddit’s incorrect speculation.) It also allowed some columnists for older news publications to assert themselves as the foremost authority on fact-checking, verification of information, and good judgment. (Because they are clearly the only people in the world capable of those skills, right? No.)

While Ohanian noted Reddit’s involvement in Boston Marathon bomber misinformation, he also pointed out how members have gone the complete opposite direction, too. One incident he recalled involved a Redditor who posted a photo of a Sikh woman with facial hair to the /r/funny subreddit (aka Reddit category). The woman actually saw the post and responded with a well-written explanation about her beliefs, which prompted coverage on many news blogs as well as Reddit’s highly trafficked front page. Despite the public attention, the original poster came back with a full apology and thanked the woman for teaching him something new. Usually, that’s not something you’d think of happening in comment sections, especially when the offensive commenter is using a screen name that provides for anonymity.

“What happened in the discussion around that [comment thread] was just amazing,” Ohanian said. “That to me feels like a smattering of progress.”