This week at Gamescom in Cologne, Germany, Microsoft got a chance for a redo in the video game marketing wars. Scoring points against competitors like Sony is important because consumers will spend their money based on who carries the best consumer-friendly message.

In that respect, this year’s Electronic Entertainment Expo (E3) was one that Microsoft would love to forget. It unveiled a bunch of games for its upcoming Xbox One console only to be upstaged by Sony’s PlayStation 4, which is expected to be faster and will cost $100 less. Consumers hated Microsoft’s initial policies around used games, always-connected hardware, and Kinect privacy policies. Sony had a more consumer-friendly stance on those issues that Microsoft had to adopt. From afar, I watched the events unfold via webcasts and took my own guesses as to who was winning over the 300,000 consumers attending Gamescom. My impression is that Sony appears to be moving ahead of Microsoft in making progress with its console, a lead that it has held since it introduced the PS4 in February while Microsoft waited until May. But Microsoft swings the balance back in its favor with one or two better games.

At Europe’s version of E3, Microsoft got a second chance to set things right with consumers. It had already apologized and backed off on its previous mistakes. Don Mattrick, the head of Microsoft’s game business, left to become the chief executive officer of Zynga, and Microsoft replaced him with someone who had no game experience. Then Microsoft sent out its executives to do press interviews, repairing damage.

Microsoft held a press event and took another step toward repairing its reputation by launching an indie-friendly program that resembled the self-publishing program that Sony announced earlier. Microsoft had clearly been working on that program for a long time, but Sony was able to make it seem like it was simply another reaction to a good Sony idea.

Andrew House, the head of the worldwide PlayStation business at Sony, was dripping with sarcasm when he said at Sony’s Gamescom press conference, “And while others have shifted their message and changed their story, we were consistent in maintaining policies and a model that is fair and in tune with consumer desires.” 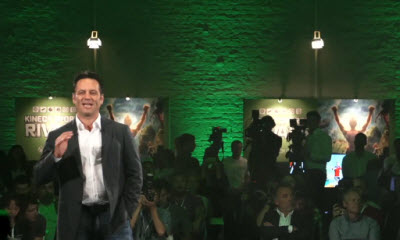 That was a fair jab at Microsoft. But Microsoft’s Phil Spencer, the head of Microsoft Game Studios, defended his company’s turnabout by saying it was responding to what consumers wanted. Sony could cynically cast that as caving into pressures and trying to pander to consumers after Microsoft’s showed its true anticonsumer intentions.

“The two-way conversation we have with our customers is a strength,” Spencer said in an interview with Eurogamer. “Certain people have tried to turn that into something that’s a bad thing about what we’re trying to do, and I just disagree.”

I’d be very interested to see what direction consumer sentiment goes after this turn of events. But one look at Google Trends shows that the bigger audience paid attention at E3. That was where Sony scored the most points with consumers. That matters because the consoles are going to come out at almost exactly the same time. Consumers will have a real choice, and Sony is already offering a faster and cheaper console. Mark Cerny walked out on stage at Gamescom and confidently declared, “PlayStation 4 is the world’s most powerful game console.” Microsoft didn’t challenge that assertion.

But here’s something that hasn’t gotten a lot of attention. Microsoft has been belittled for having a weaker box, but it came out of E3 with more awards for the best games. The Xbox One line-up was revealed this week, and I have to say that Microsoft’s games are impressive, starting with its 2014 exclusive first-person shooter title from Respawn Entertainment, Titanfall. Sony also showed off 23 games that will hit the PS4 by Dec. 31. It also announced that it would launch its console by Nov. 15 in the U.S. and Nov. 30 in Europe.

Microsoft has a tighter alliance this year with Electronic Arts. EA, which is publishing Titanfall (which had a spectacular trailer debut at Gamescom) for Respawn, has given some interesting exclusives to Microsoft in this generation. Microsoft retains its timed exclusives for Call of Duty content, it has an exclusive on a new game mode in Call of Duty: Ghosts called Blitz, and it will host dedicated servers on the Xbox Live cloud. Microsoft had more cash from the last generation of consoles and more cash in general, so it has had more money to invest in its own new games and in third-party games. At least that’s how it appears to me as Sony has been raising cash by selling off its buildings. Each little exclusive that Microsoft gets will help it in the larger war. 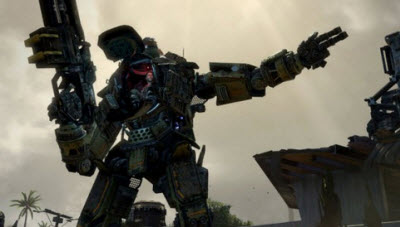 Sony, meanwhile, revealed its own line-up for the PS4. There are a lot of multiplatform games like Battlefield 4 and Watch Dogs, but Sony’s exclusives include Killzone: Shadow Fall and Infamous: Second Son. Sony put even more emphasis on indie games for both the PS4 and the PlayStation Vita handheld.

Those games look fun but not really as good as some of Microsoft’s titles, like Titanfall and Ryse: Son of Rome. All of this is subjective, of course, and I might very well back down if someone argued that Sony’s games were slightly better than Microsoft’s. But I think its line-up rides on the strength of one brand new game, Titanfall, and it will be hard for Sony to beat.

Microsoft could do all of the wrongs in the world, but as long as it comes up with titles like Titanfall, Halo 5, and the better multiplayer version of Call of Duty: Ghosts, gamers will probably forgive the company. Because Microsoft appears to have the upper hand on games, it may not matter that it is slightly less popular with consumers or that its console is slower. It is still pretty hard for me to tell who has the advantage in this next-generation console war.

What makes this battle more interesting is that the worst enemies of Microsoft and Sony may not be each other. Gamers have more options than ever. Google Android and Apple iOS devices may prove to be more interesting to consumers who don’t have as much time to play on the consoles anymore. Apple will be launching something new on Sept. 10, and even Amazon is rumored to be working on an Android game console for the home. Oculus VR is reviving virtual reality with its cool Oculus VR goggles, which are out as a developer platform now and will be out as a consumer product in the future.

And what if everybody decides that the current generation of game consoles is just fine? Rockstar Games is going to put that to the test with the launch of what could be one of the greatest games of the current generation, Grand Theft Auto V. Sony and Microsoft are trading body blows right now. But what if somebody else smashes them both into the dirt? Anything can happen in this game business.

Here’s a poll. Please vote and tell us what you think in the comments.