The narrative regarding Google’s Android operating system is that mobile developers can make money on Android, but they won’t make as much as they do on Apple’s iOS.

That’s still true. In April, mobile-tracking firm App Annie revealed that while Google Play is catching up to the App Store in terms of raw download numbers, Apple’s digital-distribution market is paying out 2.6 times more in revenue to developers than Google Play.

A huge part of the battle for mobile-app dominance is fought in the gaming market, and Google finally got serious about improving the gaming experience on the Android platform this year when it introduced the Google Play Games services and app.

Hatrell comes from a gaming background. At Microsoft, he worked on Xbox 360 and led the Xbox Live team as senior group program manager. Xbox Live is Microsoft’s multiplayer networking system. Now that he’s at Google, Hartrell wants to take what he learned developing and managing Xbox Live, which is one of the best multiplayer systems in the world, and combine that with Google’s strengths.

That led him and the Google Play Games team to introduce the Play Games services at Google I/O in May.

Google Play Games services is a networking system that lives in Google’s cloud. It enables developers on Android, the web, and even Apple’s iOS to build games with a host of social and multiplayer features. For example, one of the earliest games to launch with Google Play Games services is the watercraft racing game Riptide GP2. Thanks to Google’s cloud infrastructure, the game supports online multiplayer, leaderboards, achievements, and cloud saves. 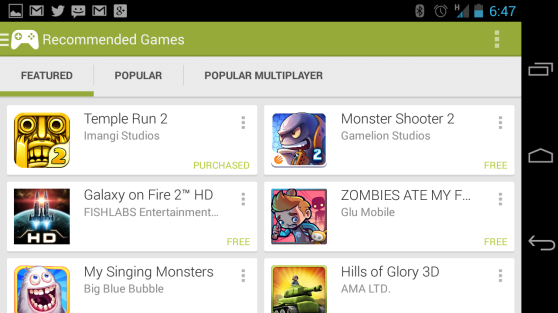 Above: The featured games in Android’s Google Play Games app.

At a small event in July, Hartrell’s team released the Google Play Games app, which centralizes and surfaces all of an Android user’s games in one location. Players can even see what their friends are playing and quickly discover new titles.

“We’re seeing some very positive metrics from our developers that have adopted Google Play Games,” said Hartrell. “For example, Glu Mobile integrated Play Games services into the vast majority of its newer titles and many of its older ones as well. With its title Eternity Warriors 2, Glu shared with us that it saw seven-day retention improve by 40 percent and an increase in play sessions by 20 percent.”

In the short time since Google introduced the Play Games products, developers integrated the services into over 1,000 games. In addition to Glu Mobile, Hartrell pointed to major releases like Temple Run 2, which now use Google Play Games services to track a players’ performances against their friends using the leaderboard functionality.

“We’re going to continue to see a lot of great games integrate with our platform,” said Hartrell. “Not only does it bring benefits to game developers, but it also brings great experiences to their players.”

The philosophy of Google Play Games

The shortcut of explaining Google Play Games as an “Xbox Live-like service for mobile” only works to a certain extent. Gaming is what an Xbox 360 is all about, and the type of player that owns an Xbox 360 is usually focused on one particular type of gaming experience. That is to say, Xbox 360 specializes in fully fleshed out “hardcore” games like Call of Duty, Madden, and Braid.

Meanwhile, Android simultaneously features deep military-strategy games and Candy Crush Saga. I asked Hartrell how his team balanced building a multiplayer infrastructure that can serve both a hardcore gaming audience and one that binges on social games. He says that from Google’s perspective, the mechanics don’t matter all that much.

“Fundamentally, Google Play Games is about taking these hundreds of millions of gamers and bringing them together,” said Hartrell. “Gaming is the thread that really brings us together, right? The way we do that is to continue to evolve the platform in a way that brings fantastic social experiences to users and enables them to experience great moments together, so that we can move away from a world where mobile gaming is this solitary type of experience.” 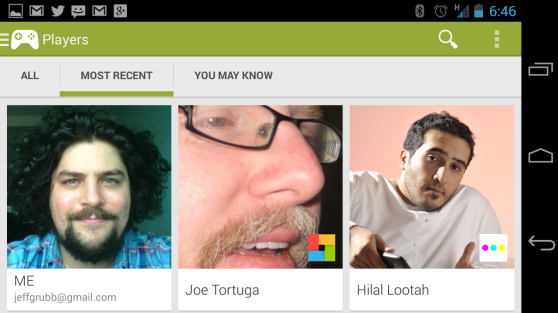 Above: Friends that were recently online with a game on Android.

“I think that if we do that right, a lot of varying styles of games can sit alongside each other because it’s not really about the mechanics themselves. It’s about who you are playing with and finding the best way to share your experiences with others.”

One of the most interesting aspects of Google Play Games services is that it works on iOS. The software lives totally in Google’s cloud, so any game on just about any platform can tap into Google and use features like cloud saves and leaderboards.

The question is: Has anyone released a game for iOS that uses Google Play Games services?

“We don’t really have specific titles that we can showcase right now, [but] we’ve seen some response there for certain,” said Hartrell. “As you can imagine the Android side gets more attention by virtue of who we are.”

Last week, Google updated its developer site with a step-by-step explanation of how to integrate Google Play Games services into an iOS app. I’ve looked myself, and can’t find a single game that’s done this so far.

“We can only say that we’re seeing great interest in being cross platform,” said Hartrell. “It’s a big part of our initiative to get players together wherever they are.”

What about those iOS developers that don’t work on Android

Gaming on Android has never compared well to iOS. Some games come out later on the Google Play market. Other titles don’t come out at all. Hartrell looks at this issue in a positive light.

“I think that what we’ve found is that 19 of the top 20 mobile-game developers have already adopted Android,” he told me. “It’s already a great place for them to bring their experiences and their craft to game players. From that perspective, we’re pretty satisfied with the adoption we’ve seen. I’d be hard pressed to find a developer who isn’t at least already considering developing on Android. We’re talking about 900 million active devices.” 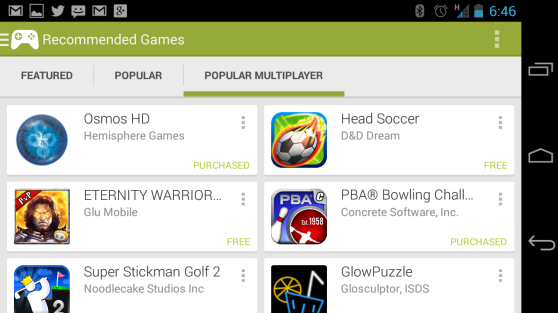 And yet, some developers still don’t bring their games to Android. Popular titles like Tiny Wings, Ridiculous Fishing, and Tilt to Live don’t have Android ports despite those 900 million active devices. I asked Hartrell what he would say to those studios that are still holding out on developer for Android.

“What I would say is the game developers that are adopting Google Play Games and publishing on Android are experiencing great momentum. If you are a [developer] holding out from developing on our platform, then you got to think about those numbers. It’s a real party over here right now, and we want everyone to experience it. It’s a really amazing moment in gaming.”

Hartrell also said he would point to those numbers from Glu Mobile and the overwhelming number of Android-device owners that play games. Again, 900 million devices … three out of four Android owners play games.

But I suspect that the real thing keeping most developers from developing on Android — those that are still holding out — is those aforementioned revenue numbers. I shared that hunch with Hartrell, who said that was probably a fair statement but things are getting better.

“From a momentum perspective, compared to last year, we’re paying seven times the amount of revenue to app developers and game developers,” he said. That means more developers are making more money.

“In terms of what we’re doing next, the Play Store is supporting more countries. Developers can now sell apps in over 130 countries. Over half of Android users can now charge purchases directly to their mobile bill through carrier billing.”

Carrier billing allows cell-phone owners to purchase apps and other content from Google Play and charge it to their carrier. Their carrier will then add that cost to their next monthly bill. This payment method is extremely popular in international markets like Japan and Korea. This should help developers generate more revenue, but it’s unlikely this alone will close the gap.

Another big incentive is that Google Play Games services beefed-up its anti-piracy measures. Developers can use the tools to keep players from accessing certain features or the entire game if it doesn’t authenticate properly.

It’s up to developers to take advantage of that to protect their games.

For Google, its job is to continue improving Play Games services so that it does blossom into a flourishing social and multiplayer ecosystem.

“We’re going to continue to iterate to bring the best of Google to game developers,” said Hartrell. “From a principal standpoint, we’re going to focus on bringing players together wherever they happen to be.”