Tron: Sugar Rush. That pretty much sums up the awesome potential of Disney Interactive’s massive sandbox game that takes the wildly successful hybrid toy model of Activision’s Skylanders franchise and infuses it with pretty much every Disney universe imaginable.

Developed by Avalanche Software (Toy Story 3: The Video Game, Cars 2: The Video Game) the title is out now for the Xbox 360, PlayStation 3, Wii, Wii U, and Nintendo 3DS, and the reviews are in: Disney Infinity is a success, but one marred by a few notable technical hiccups and occasionally wonky gameplay.

However, the two biggest hurdles for any Disney Infinity player — young or old — to overcome are leveling up each character, which quickly becomes a hefty slog, and unlocking all the Toy Box items through the game’s random Infinity Vault spin system. Luckily, both of those will be effortless, quite literally, with GamesBeat’s game guide. Let’s get to it!

Level any character up to 15 in an hour without playing

The best way to earn spins in the Infinity Vault is to gain enough blue sparks (experience points) to level up a character. Each level provides one spin, and each character has a max level of 15. Unfortunately, Disney expects kids to be playing this game for a very long time apparently, as reaching level 15 is a grueling undertaking that would make most massively multiplayer online game players wince.

Luckily, there is an extremely easy method for maxing out any character in under an hour, and the best part is, you don’t even have to be around to do most of it. 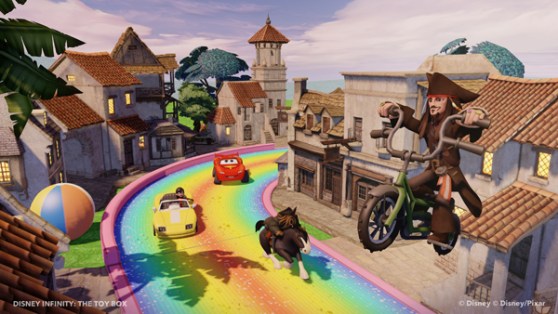 Step 1: Unlock the Fan and Stunt Buggy in the Infinity Vault.

Step 3: This part can be tricky: You need to get the Buggy to drive onto the Fan but without too much forward momentum, or else it’ll float off the other side. If you do it right, you should just be floating in the air above the Fan.

Step 4: To do tricks in a vehicle, press the right thumbstick in one of the four directions. I recommended doing all four tricks first. Then prop your controller in a way that the character will continuously do a single trick. Once you’re sure it’s set, you can go do anything else for about an hour.

When you come back, do the four tricks again before getting off the Fan. I can’t say for sure since the game doesn’t give you exact spark information for stunt combos, but it seems there’s a multiplier system similar to Tony Hawk. So after doing an hour-long stunt, doing four more tricks potentially multiplies the spark bonus considerably. I only say this because the two characters I did this on — where I didn’t do any other tricks before or after the long trick — ended up level 14 despite being in the air for the same amount of time as all my level-15 characters.

Step 5: Now that you’re ready to come down, stop doing stuns and move the left thumbstick. You have no traction, so you have to turn your car, and eventually you’ll fall to the ground.

Make sure you land properly (in other words, don’t try one last trick on your way down!) or you won’t get ANY points.

If you did it right, you’ll be level 15 as soon as you touch the ground and will have 15 more spins to unlock stuff with. You’ll also unlock several achievements and complete a few feats while you’re at it.

Special thanks to Grobanite for posting this trick on TrueAchievements.org and VSully for making the video above. 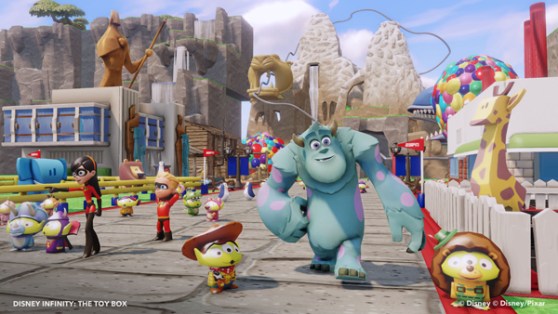 Unlock everything in the Infinity Vault

Using the trick above will get you more than enough spins to unlock everything in the Infinity Vault (takes roughly 150 spins total). Any rare items (unlocked when you receive an item with a glowing yellow bonus on it) that you didn’t get normally will be available as the final items to unlock, so don’t worry about missing out on them.

While there are many more items that can be unlocked by playing through the different game worlds (Cars, Lone Ranger, The Incredibles, etc.), you’ll at least have all of the items that you can get from the random spin.

Find out what discs are inside the random packages

It’s not bad enough that the in-game unlocks are random, but the $5-a-pop Power Disc Packs sold in stores are also randomized. You won’t know what you get until you open them, and even then many players are reporting a substantial number of doubles (ie., getting what you already had instead of what you actually wanted).

There’s a way around this, but only if you can access the game before leaving the store (such as a demo kiosk). The Disney Infinity base can read discs even while they’re in the package! So lay the pack down on the base on one side to reveal the identity of the first disc, and then flip it over to reveal the second. 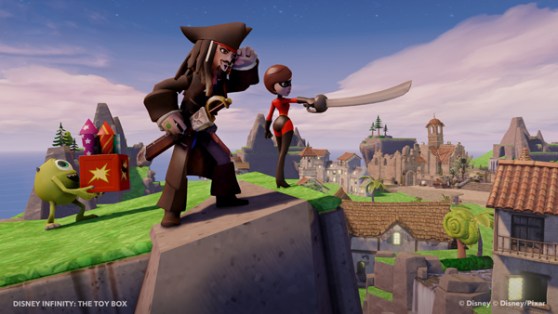 Get spark bubbles in vehicles whenever possible

Our last tip is a simple but effective one. If you pick up a spark bubble on foot, the sparks will scatter, and you’ll need to pick them up by getting in close proximity. It gets annoying after a while. However, if you hit the bubble in a vehicle, the sparks will automatically come to you.

If you have any questions about the game or tips of your own to submit, please comment below. Thanks for reading!