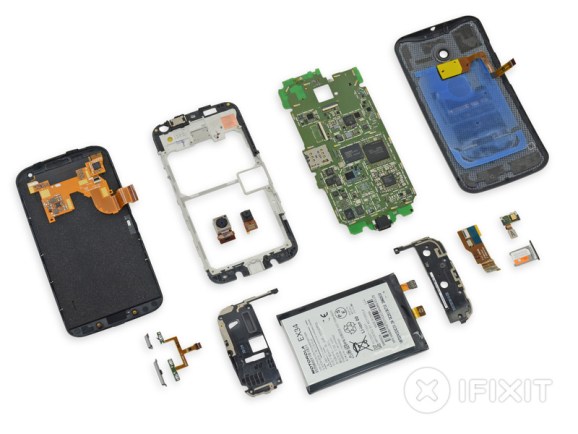 Among the many things the Moto X has going for it, you can now add ease of repair.

The DIY fixers at iFixIt have torn apart Google and Motorola’s new baby, and have found it surprisingly easy to repair. iFixit gave the Moto X a repairability score of 7 out of 10, the same as Apple’s iPhone 5, but slightly lower than Samsung’s Galaxy 4 (which scored an 8).

The iFixit team was able to easily pry apart the Moto X’s rear panel, though they needed to rely on an adhesive melter tool to unglue the panel from the phone. The battery is located close to the rear of the phone, which makes it one of the easier elements to replace (though it’s no match for a swappable battery like in Samsung’s phones). Motorola also used pressure contacts throughout the Moto X, making it easy to remove certain components like the cameras and headphone jack.

This teardown shows us that a phone assembled in the U.S. doesn’t differ too much from one manufactured in China (that’s not a huge surprise, since the components in the Moto X still come from all around the world).

I expected to see some signs of the Moto X’s extreme customizability in the teardown (you can customize it in more than 2,000 ways on Motorola’s site), but there doesn’t seem to be much of that in this guide. (I wonder if a teardown of a custom-built Moto X would look any different.)