MALMÖ, Sweden – Running against a successful incumbent elected official for a seat in the House of Representatives takes lots of time, energy, and campaign funding. Alexis Ohanian — cofounder of Reddit, Hipmunk, and Breadpig — has (or could have) all of this, and yet he’s still not sold on the idea of going to Congress.

“There was a conversation (about me running for Congress) that happened for about five minutes,” Ohanian told me and a crowd of about 600 at the Media Evolution conference in Sweden earlier this week. It was the last speaker session, and Ohanian was preaching on the virtues of keeping the media evolving by ensuring that everyone has a free, open, and available Internet. “The thing that I am hopeful for is that we’ll see a new type of political actor who is not connected through politics but who can have a political impact.”

After the conference, I had a chance to talk to him a bit more in depth about running for Congress. [Author’s Note: My exchange with Alexis was an informal conversation, not an interview — meaning the quotes below were committed from memory alone.] The initial answer he gave was replaced with a more practical explanation for why he wouldn’t run. There were several reasons, but two that definitely stood out.

It’s hard to tell if he was just being modest, but Ohanian didn’t think he’d get the votes needed because he doesn’t necessarily resonate with people outside of Reddit’s demographic — specifically, the older citizens of Brooklyn, which he proudly calls home. 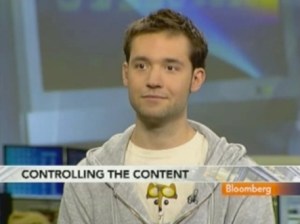 However, I don’t think that would be nearly as big a problem as he thinks. Later on in the night — hours after giving the keynote speech at the conference — Ohanian told a group of people about the first and second time he was featured on Bloomberg TV — one of the only shows his old, Armenian lawyer grandfather actually watches.

“This was years ago, when I got interviewed on Bloomberg InBusiness … I think I was wearing a hoodie and a pair of jeans,” he said, explaining that he didn’t really think much of it at the time. “I was all excited to tell [my grandfather]. When I finally talked to him days later he was like ‘oh yeah, I saw you. You looked like a bum.’ No comment about me doing well or a congratulations. Just a comment about my clothes.

“And that’s why the next time I did a round of interviews I wore a suit and tie,” he said, adding that photos of him in that outfit are among the most frequently used now.

Certainly, everyone has experienced older loved ones who think it’s disrespectful that we don’t adhere to the customs and etiquette of their day. And just like Facebook founder Mark Zuckerberg got a pass for wearing a hoodie when his company went public, Ohanian (as the co-creator of mega popular Reddit) could do the same — except when he couldn’t, because he didn’t want to disappoint his grandfather. I’d find it hard to believe he wouldn’t do little things like that to win over older voters should he ever decide to run for office.

Ohanian and I also had a pretty candid conversation about career politicians and how that’s a path he could ever commit to.

To that I simply asked, “Well, why do you have to?” — meaning, why not just do it for two years (aka one term).

Running on the promise of only two years is something a lot of politicians kind of imply, but I really can’t think of a single congressperson whose ambitions didn’t extend well beyond their initial term. And there’s a good reason most don’t want to be there two years. You can’t really do anything during that time, can’t invoke the kind of change you can see. But maybe there are other things that could be done — should be done — that a career politician just wouldn’t do. Maybe Ohanian, in two years, could run the most transparent campaign ever. He could be on hand to answer questions related to the Internet, privacy, and piracy. He’d be called upon by other house members who want him to vote on their bills. He’d have a little bit of leeway, even if it wasn’t much.

Also, we’ve never had someone from the Internet generation (Reddit generation?) as an inside man in Washington. We’ve never really even had someone who could be classified as a bonafied tech geek. With Ohanian, that would change —  possibly for the betterment of everyone. At the very least, perhaps Ohanian’s campaign could inspire a new crop of smart people from the “Internet generation” to run for Congress.

So what was Ohanian’s response to running on a promise of two years? Well, first he laughed a bit. Then after 15 minutes of conversing about things in the aforementioned paragraph, he admitted that it got the “gears spinning” inside his head. He seemed visibly more open to the idea of “Rep. Ohanian (I-Ny.)” than he was the first time I asked him. (And, yes, it’s very possible he was just humoring me, so take that for what it’s worth.)

Officially, Ohanian’s answer remains “no” when it comes to running for a House seat in the 2014 election. Whether that changes between now and next November is anyone’s guess. One thing I do believe is certain is that this isn’t the last time Ohanian will answer questions about running for Congress.