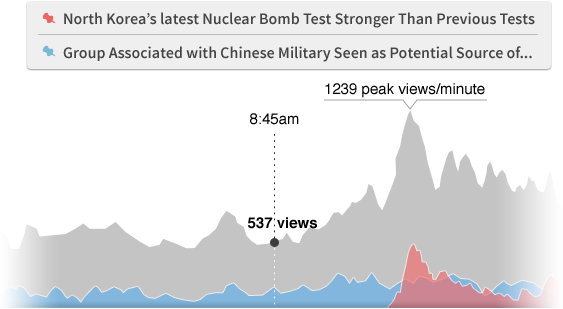 Parse.ly's traffic dashboard lets you see what stories are peaking on your site.

In the race for pageviews, knowledge can be a dangerous thing. On the one hand, editors like me love having data that tells us what kind of stories people are clicking on.

On the other hand, giving people what they want often turns into writing about the nearly-naked Miley Cyrus and posting more slideshows of Grumpy Cat.

But if that means more sites are turning into the digital equivalent of People magazine, blame the editors, don’t blame the toolmakers who help them make those editorial decisions.

Those toolmakers include the ubiquitous Chartbeat and Google Analytics, used by nearly every content-producing website. But those tools are like axes and hand saws: ubiquitous, but not especially powerful. By contrast, Parse.ly, a relative newcomer to the real-time analytics market, is more like a power saw. Its “Dash” service provides a powerful and flexible way to see what content is performing well, examine headline performance, compare writers, and track different sections of one’s site, all in real time. It also lets you see where your site visitors are coming from, even drilling down to specific tweets that may be driving your posts into the viral zone.

Today, Parse.ly gained a little extra firepower by way of a $5 million series A investment led by Grotech Ventures, with participation from Blumberg Capital, ff Venture Capital, and FundersClub. The money will be used to expand the company’s sales, marketing, and engineering efforts, according to a press release issued this morning.

“Think Google Analytics on steroids focused clearly on publishers and their content,” said Blumberg’s Jon Soberg, who noted that his firm helped fund the company’s seed round awhile back. “Parse.ly can give you insights into not just the content that performs well, but when, for which users, etc.”

The company’s cloud-based analytics service is used by Atlantic Media, Ars Technica, Mashable, Meredith Publishing, Spin Media, and Talking Points Memo. VentureBeat also briefly tested Parse.ly during its beta period. I would have loved to continue using it, but we couldn’t justify its cost: While Parse.ly did help us optimize traffic, I didn’t see a dramatic enough effect to offset the monthly service fee.

Parse.ly claims that its network of customer sites deliver an aggregate 5 billion pageviews per month, generated by 160 million unique visitors. Using that data, the company has assembled “The Authority Report,” a monthly report on the content ecosystem.

Surprising insight from that report: While Google is far and away the biggest driver of traffic, with more than 200 million pageviews, and Facebook is number 2, with almost 80 million, the number 3 traffic driver is a big surprise: Outbrain, which operates a related-links network, and accounted for about 50 million pageviews in a month. Parse.ly’s own network of sites delivered a pretty respectable 40 million pageviews, coming in fifth. In other words, publishers are driving a lot of traffic to one another through link-swapping modules operated by Outbrain, Parse.ly, and the like.

Parse.ly was founded in 2009 and is based in New York City.