As Kleenex is to tissues, John Madden is to video game football. It’s hard, and humbling, to realize that 25 years have passed since the legendary NFL coach first enthusiastically charged through the digital sports landscape. In honor of Madden’s silver anniversary, EA Sports is delivering a slightly more substantial entry in its best-selling juggernaut.

Or at least that’s what the publisher wants us to believe.

No, seriously, Madden NFL 25 — coming out today on Xbox 360 (played here) and PlayStation 3 — is not just Madden 13 with a back-of-box list of minor tweaks and tinkers. EA promises us. Cross its heart.

So, let’s see if 25 deserves a roster spot in your library or if you should auto-sim through it to next season.

Pro Bowl-level presentation
Madden NFL 25 embraces the big-budget bluster of the NFL. Fighter-jet flyovers. Mascots running through fireworks and confetti. Talking heads in the booth. Muscled-up millionaires chest-bumping each other. It’s all in there — except for the washed-up country singer doing a cheesy lead-up.

The presentation is excellent, and it serves as the thread binding the package. Developer EA Tiburon focused on the details. Each important primetime matchup starts off with a customized video for the participating teams. The crowd follows popular NFL memes. Denver diehards chant “in-com-plete” as the opposing quarterback misses a throw, and fans of Jacksonville Jaguars running back Maurice Jones-Drew echo “Drewwww” after the stocky star rumbles to a first down. 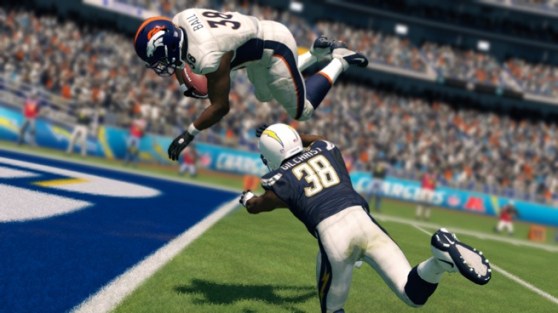 Above: Madden NFL 25 successfully captures the dynamic nature of football.

When playing the Connected Franchise mode, where I took over an existing roster as owner, I enjoyed reading fake tweets from well-known ESPN personalities, including Adam Schefter, Chris Mortensen, and the controversial Skip Bayless. In fact, many media notables from both ESPN and CBS make appearances throughout the different modes.

EA Sports’ latest NFL entry continues to capture all the noise and spectacle surrounding pro football, building on a solid foundation that makes all the action on the field even more believable.

Physics in motion
Last year, Tiburon introduced the Infinity Engine, redefining Madden’s physics. Madden 25 features the next version of that engine, which heavily affects gameplay. Running is more nuanced for both the backs and the offensive line. Skillful studs can link together multiple moves, including jukes, spins, and stiff arms. A modifier button lets you execute finessed variations of those techniques at the expense of your running speed. Players can even regain their balance while they gallop down the sideline by hitting the right stick at the proper time. The O-line also blocks with added realism thanks to the refined physics, opening holes in a more natural way and forcing you to choose the right running lanes to find daylight. So, you’ll have to think like a 2,000-yard machine if you want to score points on the ground.

Become a gridiron tycoon
If I suddenly found myself billions of dollars richer, I would probably consider owning a professional sports franchise. I’d buy some ridiculous hat or sport coat that would become my “signature.” And maybe I’d finally start smoking cigars. Well … probably not. But, for some reason, I find this aspect of the NFL oddly charming. You wouldn’t have the Dallas Cowboys of the ‘90s without Jerry Jones and vice versa.

Madden 25 lets you live the life of a player, coach, or owner through its Connected Franchise mode. As an owner, you still get to coach the team and play actual games, but you also get full control of your organization. Trusted advisers will give you feedback in key areas like marketing, ticket sales, stadium affairs, and other finances. After a while, you can even choose to relocate your club. 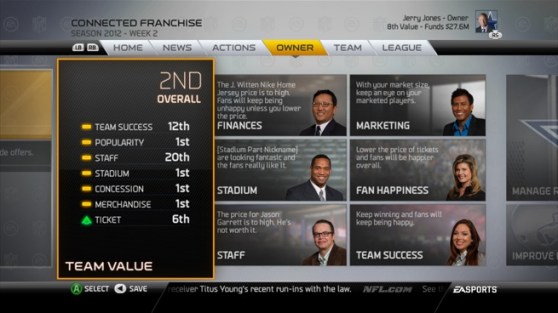 Above: As an owner, you’ll have a stable of advisers to help you manage your organization.

As the new owner of the aforementioned Jacksonville Jaguars, I made shrewd improvements. I renovated EverBank Field’s parking, made chicken salads and sodas more affordable, and I signed some key free agents. Before long, the Jags became a contender.

Then, they became the London Bulldogs.

That’s what makes this mode so fun. You can turn any squad in the league into your personal plaything, throwing wads of cash left and right without consequence. And if you don’t want to bother with tweaking numbers, you can always delegate everything to your trusted staff. Being an owner is almost as enjoyable as being an MVP.

Needs more ‘boom!’
With Madden, EA Sports is in a unique position. Its nomenclature tends to focus on athletic endeavors — NHL, NBA Live, FIFA Soccer, and so forth. Yet, the publisher handcuffed Madden (and Tiger Woods PGA Tour) to a personality, and with the Hall of Fame coach having telestrated his way to full-time retirement, he’s become less relevant with the target audience. So with each year, his video game presence fades further into obscurity.

I get it. Madden is about football and not the coach himself. Heck, many of the people playing the series probably wonder why it’s not called EA Sports NFL Football. But this is Madden NFL 25. It’s an important release … a celebratory release. And I’m shocked with its lack of nostalgia. 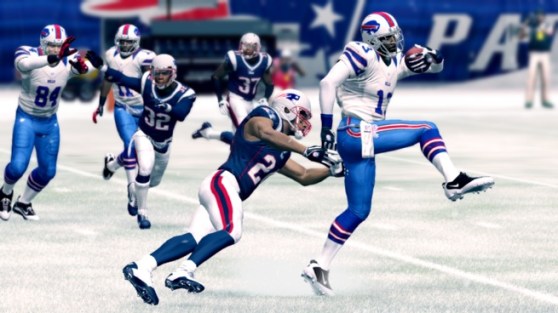 Above: Madden is about football, but it should also acknowledge its roots.

Do we get a documentary filled with rose-colored clips, sound bites, and screenshots? Nope.

Do we get a classic 16-bit mode similar to the one in Madden 2002 or an old-school inspired mode like the one in NHL 14? Nah.

Do we at least get to see John’s creepy holographic ghost again or hear his voice tell us which play to choose in-game? No … and no.

We get some scrolling logos in the intro and a few loading screens highlighting historic releases. Oh, and Madden does make an appearance as a coach on the All-Madden squad and as a selectable character in Connected Franchise, which is cool — but not cool enough.

Madden NFL 25 is the best American football game I’ve played since Sega’s last NFL 2K effort. It’s polished. It presents itself well. And it’s a lot of fun. Each play … each flick of the stick shows how much effort EA put into this series. Those 25 years of hard work are in full effect here, and that’s great news for all of us who’ve been fans every turf-tearing step of the way.

Yet, with 25, EA Sports should have given itself a few additional pats on the butt. It has stayed in the game for this long, and it should have spent more time reminiscing about its achievements on the virtual field. In this case, I would welcome a little more showmanship and attitude.

And — at least for this year — more John Madden. 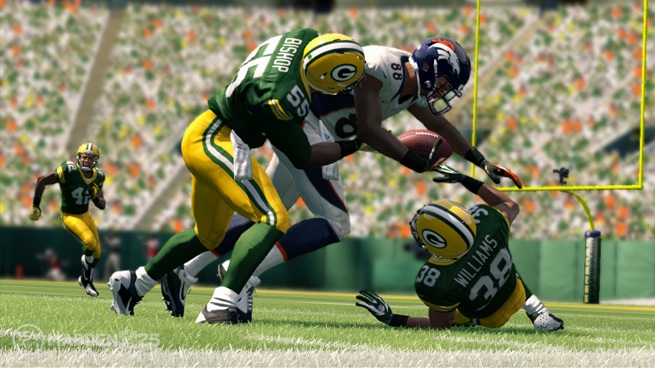 Above: Demaryius Thomas goes down after a catch.

Madden NFL 25 released on August 27, 2013 for the Xbox 360 and PlayStation 3. The publisher provided GamesBeat with an Xbox 360 copy of the game for the purpose of this review.