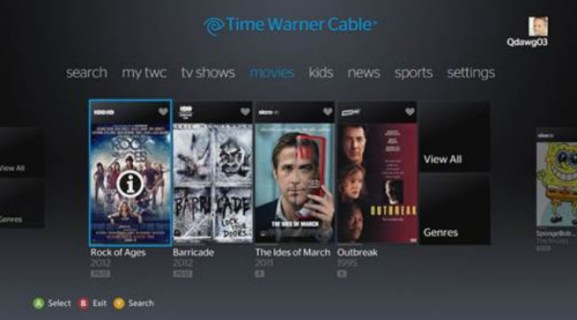 Time Warner Cable and Microsoft stepped into a big alliance in June, and the first result debuted today with the launch of TWC TV for the Xbox Live online service.

The new app for Xbox Live Gold paid members who also have a TWC subscription will deliver up to 300 of the most popular TV channels to the Xbox 360 game console.

Those channels include AMC, BBC World News, Bravo, Cartoon Network, CNN, Comedy Central, Food Network, HGTV, and more, depending on the viewer’s TWC subscription. With TWC TV, the Xbox 360 becomes the equivalent of another set-top box in the home (though you’re paying the XBL Gold sub fee on top of your cable dues). This is the sort of branching into broader entertainment that some fans don’t necessarily like, because they feel like it distracts from the focus on games. But Microsoft and Time Warner have both figured out a secret: Gamers watch TV.

Later this year, presumably with the launch of Microsoft’s Xbox One game console, the app will add video-on-demand.