App Annie released its latest app ecosystem report on Google Play and Apple’s App Store today. Apparently, Google Play is all about communication, as a massive six out of 10 most-downloaded apps on Google Play are messaging apps.

In contrast, only two of the top 10 iOS apps in July were messaging apps.

Given the numbers, it makes sense that the highest-grossing apps on Google Play include Japanese-headquartered Line and Gree, in first and second place respectively, Korea’s KakaoTalk in third place, and WhatsApp Messenger in eighth. Interestingly, only four of the top-10 most profitable non-game apps are from U.S. publishers, and the top U.S. app, Pandora, is only fourth. 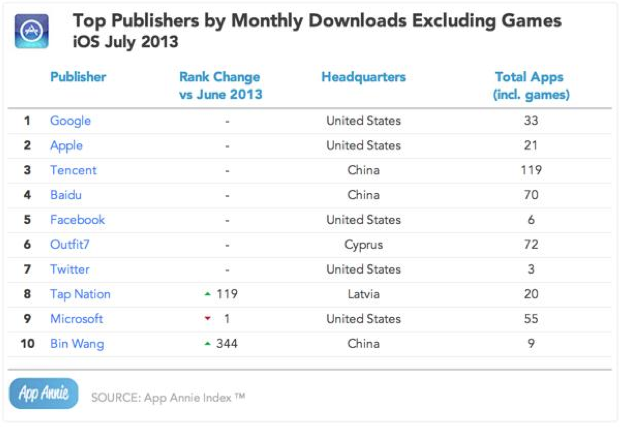 While Google Play’s most-downloaded apps — besides games — are almost exclusively social and communication apps from publishers such as Facebook, WhatsApp, Tencent, and Twitter, the most-downloaded apps on Apple’s iOS App Store are a diverse assortment of navigation, education, photo and video, and utility apps. In a surprisingly quick move, the third most downloaded app on the app store is a Chinese educational app, Chengyu Quiz Madness, which jumped all the way up from number 441.

“The images shown in the app are clues for children in China to test their knowledge of chengyu, which are Chinese idioms derived from ancient literature that are usually four characters long,” App Annie said.

Google continues to hold the top spots on the iOS App Store, with Google Maps and YouTube taking the first and second most-downloaded spots, respectively. And Google Earth jumped from being the 31st to the 9th most downloaded app on iOS in July.

Only three publishers held top-10 gross revenue spots in both the iOS App Store and Google Play, according to App Annie’s numbers. Those were the music app Pandora and two navigation apps: TomTom and Garmin. That’s interesting, given that Apple Maps and Google Maps are free turn-by-turn navigation apps. Clearly TomTom and Garmin are doing something right to still get people to pay for directions.