As wearable computing takes off, chip makers are starting to target their silicon designs so they can be used in the smallest devices. 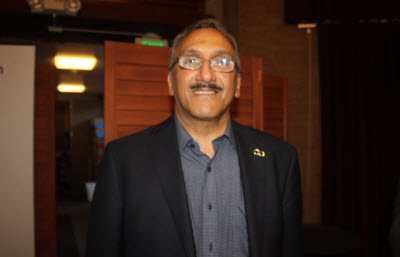 Imagination Technologies announced today that it has teamed up with Ineda Systems to create chips for wearable computing gadgets, from smart watches to health and fitness monitors.

Under the deal, England-based Imagination will provide its PowerVR graphics processors and MIPS Aptiv central processing units as components that Ineda will use in its chips. Ineda is designing “system on chip” solutions that combine the graphics, CPUs, and other components on a single chip that can be provided to the makers of gadgets.

Ineda chief executive Dasaradha Gude said that Imagination’s cores will provide a foundation for power-efficient chips that can be used in wearable devices. Since the devices are small and can’t accommodate bulky batteries, the wearable computers have to use chips that have ultra-low power consumption, and that is what Imagination’s teams are creating, said Hossein Yassaie, chief executive of Imagination, in a press event today at Stanford University, where MIPS, which Imagination bought in February for $100 million, was founded.

Imagination will face considerable competition from the likes of Intel and ARM — and ARM’s various licensees. Like ARM, Imagination doesn’t build chips. It is in the licensing business. It creates intellectual property such as MIPS cores or PowerVR graphics and then licenses them to other chip makers like Ineda. The company has done extremely well over the years licensing its PowerVR graphics to smartphone chip vendors. PowerVR is used in Apple products such as the iPhone and iPad, as well as many other mobile devices.

Tony King-Smith, vice president of marketing at Imagination Technologies, said at the press event that 5 billion Imagination-based chips have shipped to date, and 3 million more ship each day. MIPS also shipped more than 700 million last year. In its last fiscal year, Imagination’s IP shipped in 535 million chips, and its target is 1 billion units in fiscal year 2016.

To get there, the company has to penetrate new markets, such as getting its MIPS CPUs into the ARM-dominated mobile device market. And it has to help pioneer new markets such as wearable computing.

“[MIPS] is a very strong architecture,” King-Smith said. “We see MIPS continuing to gain momentum,” particularly in areas such as networking and home electronics. Imagination also makes its own breed of consumer electronics gear under the brand name Pure (pictured above), and it could field its own wearable devices under that brand.

MIPS is in the midst of designing its next-generation Warrior CPU cores that are expected to debut in 2013. These and future chip cores will be the foundation of wearable devices.