Animators have a tough task creating realistic animations that reflect the nuances and emotions of real people. But Mixamo has created a game development tool called Face Plus that can capture a face in real time and animate it in a 3D-cartoon style. The San Francisco 3D animation service provider says it will lead to more emotionally engaging games with characters who have realistic facial expressions. 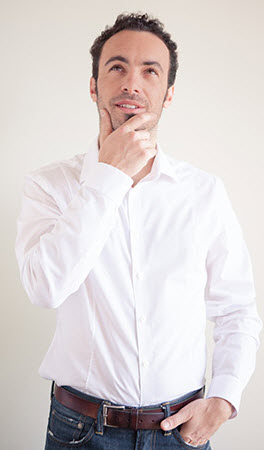 Above: Stefano Corazza of Mixamo

This kind of technology makes it a lot easier for amateur game developers to create stunning 3D characters in games. And it moves animators a small step closer to conquering the “uncanny valley,” a hypothesis that suggest that human face animations become more unreal the closer the animations come to 3D replicas.

“That uncanny valley means that you have to have the budget of James Cameron’s Avatar, or you’re going to fail,” said Stefano Corazza, chief executive of Mixamo, in an interview with GamesBeat.

I tested the service myself, and Mixamo’s animators created a short film (see below) capturing my cartoon self as it lip-synced my spoken words. With the animation technology, a developer can map your webcam video to an animated face in a relatively short time. Mixamo’s tool sees your facial movements, and then it mimics them in an animated character. That can save hours of creative work time. 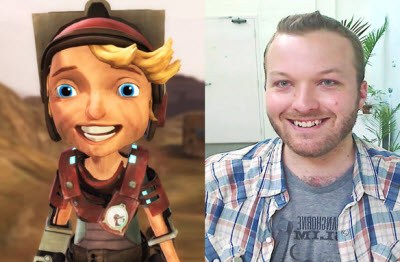 Teaming up with Advanced Micro Devices, Mixamo’s Face Plus uses some heavy-duty computational horsepower to blend real-time motion capture and 3D facial-animation technology. Mixamo is announcing the technology at Unity Technologies’ Unite game development conference in Vancouver, and it will make the technology available to Unity’s 2 million game developers as well as movie makers.

AMD liked the technology, which pushes microprocessor and graphics technology to the limit, so much that it invested in Mixamo. Face Plus uses AMD’s graphics processing units (GPUs) to get a 13-fold improvement in processing compared to systems that just use microprocessors. All of that computer power goes to work so developers can have a much easier time with fewer interruptions in their creative processes.

Manju Hegde, corporate vice president of heterogeneous solutions at AMD, said he was excited about the potential Mixamo’s technology could bring to new consumer applications. Developers can use off-the-shelf cameras to capture faces and then quickly turn those faces into 3D characters.

“We think this is going to democratize 3D character art,” Corazza said. “We remove a very big pain point for game developers. We get you 80 percent of the way to a finished product.”

Mixamo created its own short 3D film to illustrate the power of the technology. The film, “Unplugged,” stars a little boy (left) who follows a bug and gets away from the drudgery of his slave-like work in an industrial mine. Mixamo’s animators created the film with a lot of painstaking work. But the animation process was made much easier through the use of Face Plus and the tools of version 4.3 of the Unity 3D game engine. The assets of the $150,000 short film will be available free of charge to developers for experimentation.

“We can do this without the complexity or expense of the high-end facial animation systems that require dozens of cameras,” Corazza said. “We condense this into a single point.”

The aim is to lower the cost of animation from around $100 per second of content created to well below $10 per second created. So far, Mixamo’s technology doesn’t to photorealistic animations. But Corazza says photorealism is overrated compared to the emotions that can be conveyed with 3D animated cartoon characters.

The Face Plus tool can take the entire facial 3D animation work flow and execute it with a single tool in real time. Developers can edit the animations and tweak them within the engine so they doesn’t look overly realistic if such realism isn’t desired.
On top of Face Plus, Mixamo’s Auto-Rigger technology provides the same type of service for full body animations. Developers and artists can simply upload their existing 3D character meshes to the site and watch it get automatically rigged and animated in seconds.

“Unplugged will hopefully inspire our developers to be even more ambitious with their games,” said David Helgason, chief executive of Unity Technologies. “The game industry is evolving fast, and players are looking for richer stories with deeper emotional engagement. Facial animation’s prohibitive costs and proprietary equipment requirements represent one of the biggest limits for game developers hoping to address this. The combination of Unity 4.3 and Face Plus removes some of these roadblocks.”

Face Plus is available today as part of Mixamo All Access, a $1,499 annual subscription service that gives developers unlimited access to Mixamo’s entire collection of 3D characters, tens of thousands of high-quality 3D animations, and the Auto-Rigger.

Mixamo was founded in 2008 by 3D experts Corazza and Nazim Kareemi after they worked on animation technology at Stanford University. They raised $11 million to date from Granite Ventures, AMD, and Keynote Ventures. Mixamo has 20 employees.

“We have proven this technology works, and now we want people to start using it,” Corazza said. “We can’t wait to see what they are going to come up with.”