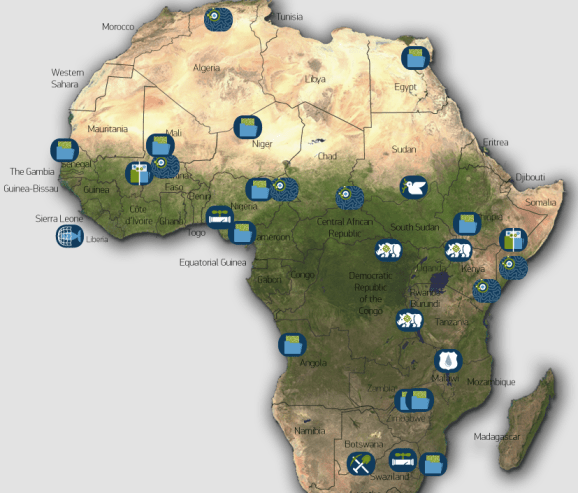 DigitalGlobe is using satellite imagery and data analytics to create a real-time map of what’s going on in the world.

DigitalGlobe owns and operates one of the world’s leading commercial satellite constellations. Its imagery collection contains over 4 billion square kilometers of imagery, which senior director of marketing Andre Kearns said is enough to collect the world 27 times over. The satellites captures 60 percent of the Earth’s landmass every 30 days. DigitalGlobe is now analyzing this treasure trove of data with the lofty goal of “seeing a better world.”

“This year we started developing comprehensive country-by-country datasets that include anything that touches human existence on this planet,” Kearns said in an interview. “Our ultimate goal is to become the authoritative, indispensable source of information on our rapidly changing planet.”

Africa is the first region, or “microsite,” that DigitalGlobe is looking at. Based on data collected from the satellites, a team of geospatial analysts gleans insights about geographic patterns, infrastructure, illegal activity, humanitarian crises, economics, demographics, food and water security, weather, major events, and even ethnic tribal boundaries. They built an interactive map where you can see that oil theft is a major threat in Nigeria or that the Lord’s Resistance Army is causing population displacement in Central Africa.

Organizations with interests in the area, whether they are NGOs or global corporations, can use this information to protect their interests and make intelligence decisions. DigitalGlobe also conducts predictive analytics to estimate the likelihood of extreme events happening.

“The value of this type of analysis is around area reduction, which we can do by 90 percent,” Kearns said. “You can see where major events are most likely to occur in specific areas. For example, narrowing a metro area concerned with criminal activity from 1,000 square feet to 100 square feet is useful for military, law enforcement, or companies concerned about security to inform where they apply limited security resources and help protect lives.”

Many of DigitalGlobe’s analysts have background in defense and intelligence. They are using the satellite imagery to predict extremist activity all across Africa, seek out connections among those extremist groups, and identify high risk areas to mitigate threats. NGOs are also using this information to track humanitarian crises, and in one case, to document the latest tactics around elephant poaching to fund an army in the Congo.

Commercial security is another application. Kearns said that in the case of oil theft, thieves are stealing roughly 150 barrels a day from pipes and selling it on the black market. This costs the Nigerian government and oil companies more than $6 billion in losses. There are also the environmental costs. Thieves tapping into the pipelines creates oil spills and crude oil seeps into the water supply, contaminating fishing water and hurting the fishing and agricultural economies. Digital Globe could help by identifying which portions of the pipeline are the highest risk for oil theft.

Kearns said that there are massive investments happening in the geospatial industry (Waze’s sale to Google, for example), and this type of intelligence is becoming more widespread.

“Big data and visualizations have created growing expectations of data analysis and business intelligence,” he said. “We feel that the intelligence of dynamic geospatial analysis hasn’t been fully incorporated into the business world. This perspective is missing and we want to pull it into the mainstream.”

DigitalGlobe will focus its efforts on Africa, but has big plans to open it up to more regions.