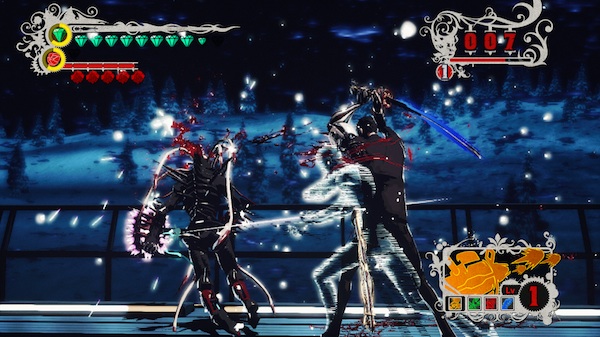 Above: You fill up Mondo’s blood meter (the red roses) by using simple attacks.

I’m not sure if it’s because of the English translation or the original Japanese script, but Killer is Dead seems confused about what it’s trying to accomplish. Sometimes, it tells a stylish action-adventure story with aliens and monsters. At other times, it’s parodying that genre when characters crack jokes that break the fourth wall — during one encounter with a target, Mondo mentions that they should move to a wider space because that’s where boss fights usually happen. But almost all the time, the story is just confusing, and nothing embodies this quite like the talking unicorn, a recurring character who, like certain plot points, appears and disappears without any explanation.

Killer is Dead even throws in a last-minute revelation that surprises everyone in the Executioner Office, but it introduces the idea so poorly that I wasn’t sure why it was so significant. From that point on, events move so fast that Killer is Dead has no time to address any lingering questions and instead adds more and more to the pile.

“Mondo Girls” is the term given to the women — Natalia, Koharu, Scarlett, and Betty — in the first-person Gigolo Missions. You have to win them over so they can give you gameplay-changing rewards, like new weapons for Mondo’s mechanical arm. Except for Scarlett (who has a list of combat challenges for you to complete), the process is always the same: Build up a Guts meter by ogling at them when they’re not looking and then give them presents until they’re happy. You can make the process go faster when you get the Gigolo Glasses, X-ray specs that let you look underneath their clothes and tell you what kind of presents they like.

While Gigolo Missions fit in with Killer is Dead’s over-the-top tone, they doesn’t make much sense in terms of character development. Mondo is a cyberpunk Casanova that can supposedly sweet-talk his way to women’s hearts, so why aren’t there any dialogue options or a conversation system? The women just blankly stare at you and give you compliments out of thin air — beyond your sneaky stares, you have no say whatsoever. It gets weirder and weirder, especially once you visit them enough to trigger the (non-nude) sex scenes when Mondo takes them home for the night.

Beyond the creepiness factor, some of the women are annoying. They’ll call you while you’re fighting or when you’re talking to another girl, saying that they miss you or want you or that they’re angry that you haven’t seen each other in a while. This just seems so out of place when you’re busy trying to save the world.

On the technical side of things, screen tearing is a prevalent problem throughout Killer is Dead. It’s not a deal-breaker by any means, but its hard not to notice it. You’ll also see short but plentiful loading screens (and this is after a hefty 4GB mandatory install on the PlayStation 3 version). 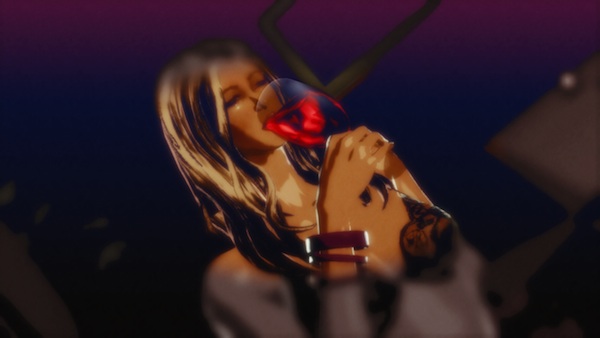 Above: Gigolo Glasses are fancy X-ray specs that let you look through the women’s clothes.

I’m torn. On one hand, Killer is Dead is an unusual adventure with better-than-average fighting mechanics and a mostly likable cast. But it falls short nearly everywhere else. The story is incomprehensible about half-way through, the Gigolo Missions just come off as being crass and tacked-on, and the extra challenges can only keep your attention for so long. I still think it’s worth playing, but only if you pay much less than the $60 price tag.

Killer is Dead is out now for the Xbox 360 and PlayStation 3. The publisher provided GamesBeat with a PS3 retail copy for the purpose of this review.