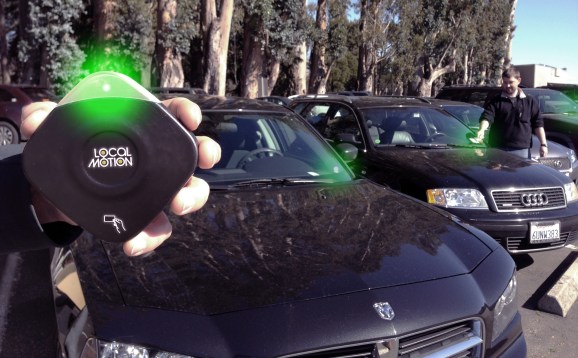 Sinofsky said in a blog post that he was drawn to Local Motion because it is solving major problems of congestion, pollution, and resource consumption.

“Making vehicles available when and where needed and keeping track of them is a surprisingly manual process today,” he said.”Not surprisingly, as a result, it’s fraught with high costs and low efficiency. [… Founders] John Stanfield and Clement Gires had an idea for a better way to tackle the fleet problem.”

The U.S. is the largest market in the world for cars and trucks. It is home to 250 million registered passenger vehicles, and there are nearly 8,000 cars per 1,000 people. Corporations, university campuses, and municipalities own around 10 million passenger cars for use by their employees, but only 40 percent of fleet cars are used at any given time. Stanfield and Gires founded Local Motion with the goal of building a network that can manage these fleets more efficiently.

Local Motion helps organizations manage their fleets as efficiently as possible through intelligent sharing. It manufactures a small piece of hardware that can be installed in any vehicle. These modules transmit and collect data, so users can see an available vehicle from their smartphone and hold it for immediate use. Local Motion’s technology analyzes all this data to provide insight into how many cars need to be where at what time.

“There is a tremendous amount of optimization to be made,” Gires said in an interview. “After a couple of months, we can help organizations remove 30 percent of their fleets thanks to our sharing technology. The value we are gathering from our data is extremely valuable. Our obsession is to build the most efficient transportation network in history, and long-term, to change the way people interact with their transportation network.”

Gires described the data as forming a “map of mobility.” Using this map, clients can figure out that they need 50 cars in front of a building at 10 am and allocate their resources intelligently. This cuts down on the number of vehicles they need to buy and manage, and ultimately, could reduce the number of cars on the road.

Gires and Stanfield met at Stanford. Gires had helped develop a bike-sharing program in Paris and Stanfield had invented an engine that processed vegetable oil into biodiesel. They first set out to build “the most shareable vehicle ever” but thought that rather than adding more vehicles to the equation, they could have a greater impact by optimizing the vehicles that are already out there.

Local Motion participated in hardware incubator Lemnos Labs and closed a $1 million seed round in November 2012 from Tim Draper of Draper Associates, Jerry Yang of Ame Cloud Ventures, Ash Patel of Morado Ventures, and Tony Hsieh from the The Vegas Tech Fund. At the time, Google was its first and only client as part of a pilot program to optimize its fleet of 150 electric vehicles and 2,000 bicycles.

This $6 million will fuel expansion in the U.S. and in France. The City of Sacramento has signed on as a customer, and Local Motion is looking at universities and other municipalities and corporations as well. The money will mainly go towards hiring.