REDWOOD CITY, Calif. — Nintendo is serious about hanging on to the lead in the handheld gaming business. Today, it is revealing that its new entry-level handheld, the Nintendo 2DS, will start selling on Oct. 12.

The new $130 system could help stave off share losses to the Apple iPod Touch and give consumers a new Nintendo option at a time when Sony just knocked $50 off the price of its PlayStation Vita handheld. It’s one more salvo in the broader war among smartphones, tablets, and gaming handhelds for the souls of mobile gamers.

The two-screen 2DS can play the same games as the popular Nintendo 3DS but without any 3D. It’s as if you were playing on a flat device with the 3D slider switch turned all the way off, said Reggie Fils-Aime, the president of Nintendo of America, in an interview with GamesBeat at Nintendo of America’s headquarters. Fils-Aime showed the new handheld, which is a flat, angled device. It’s more like a flat two-screen device, and it is no longer foldable like the Nintendo 3DS. The lower screen is touch enabled.

The launch coincides with the announcement of a $50 price cut for the Nintendo Wii U deluxe game console, which is effective Sept. 20. The 2DS also launches on the same day as Pokémon X and Y, but right now, Nintendo doesn’t have a bundled game-2DS deal.

Nintendo will also launch a bunch of new games for the 3DS, which has been the top-selling hardware system in the last three months in the U.S. The 3DS got a big boost from Animal Crossing: New Leaf earlier this month.

“This is proof that software drives hardware,” Fils-Aime said.

“You can think of this as a $40 price cut on the 3DS,” said Lewis Ward, game analyst at IDC. “What you sacrifice is the stereoscopic 3D and the clamshell form factor. Nintendo can save money on that and afford to drop the price.”

Ward thinks Nintendo may pick up either former DS owners as customers or those who have never owned a handheld before. As for the Vita, Ward doesn’t believe this particular handheld competes with it at all.

The device has two rear-facing cameras and one front-facing camera, so you can do things like AR Cards and Face Raiders. You can download games from the Nintendo eShop via Wi-Fi, but the device also has a game cartridge shot.

“Not every consumer wants to download their software,” Fils-Aime said.

“We definitely believe there are consumers looking for value in handheld devices,” Fils-Aime said. “We have always thought about the entry-level consumer.”

The system will launch in Europe and the U.S., but there is no launch information for Japan. There’s also no word as yet on a 2DS XL in the works. 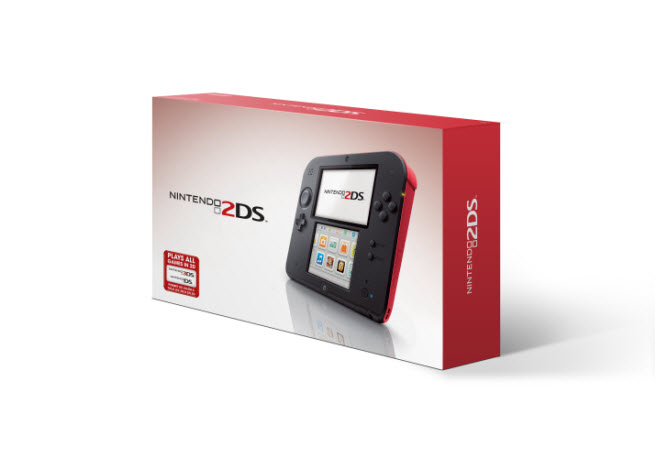 Above: Nintendo 2DS is the new kid-friendly version of the 3DS.