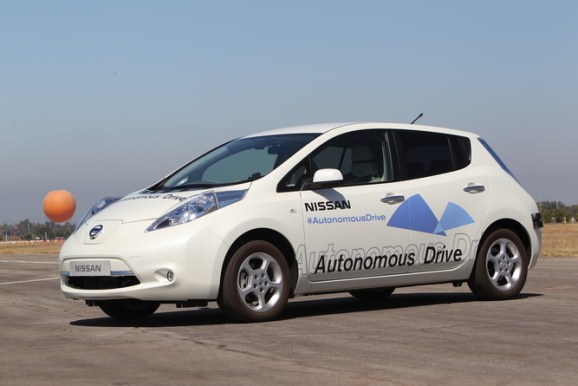 Nissan said it will have self-driving cars for the mass market by 2020. The company has unveiled an aggressive plan to build such cars that are commercially viable within two “vehicle generations.”

The company demonstrated its self-driving car tech for the first time at Nissan 360 in Southern California yesterday. It presented Nissan Leafs tricked out with laser scanners, around-view monitor cameras, and artificial intelligence to the audience as a glimpse of a future where our cars drive us.

“Nissan Motor Company’s willingness to question conventional thinking and to drive progress – is what sets us apart,” said CEO Carlos Ghosn. “In 2007 I pledged that – by 2010 – Nissan would mass market a zero-emission vehicle. Today, the Nissan Leaf is the best-selling electric vehicle in history. Now I am committing to be ready to introduce a new ground-breaking technology, Autonomous Drive, by 2020, and we are on track to realize it.”

Nissan engineers have been working with MIT, Stanford, Carnegie Mellon, Oxford, the University of Tokyo, and startups for years to research and develop the technology. A program is already underway in Japan to build a test ground for the vehicles that involves “real townscapes,” rather than mock-ups, to ensure safety. The tech is an extension of its Safety Shield product which monitors a 360-degree view around vehicles for risks to alert drivers and take action if necessary. Everything is built into the vehicle, and the goal is for the car to drive autonomously on the highway without collisions.

Nissan said that six million crashes in the U.S. cost $160 billion a year, and 93 percent of these accidents are due to human error. Technology that cuts down on human error can save lives, money, and reduce traffic that results from accidents. This will enable insurance companies to offer lower premiums to people who have robot drivers and manufactures to make cars lighter and less “armored against” collisions, and this would increase fuel efficiency and range for electric vehicles. Piper Jaffray’s analyst Gene Munster predicts that the utility of reducing auto deaths and idle time in traffic “add up to a $200 billion opportunity in autonomous vehicle technology.”

Accordingly, autonomous vehicles are one of the hottest tech trends right now and are generating a huge amount of excitement. Competition is fierce to be the first to market. Nissan joins Google, Toyota, and Audi. Ford, Tesla, and startups like Mobileye to make this vision a reality. Google seems to be ahead of the pack. Its self-driving cars have logged over 300,000 miles, are licensed in Nevada, and fancy themselves smart enough to park in spaces reserved for Nobel Prize laureates. Google cofounder Sergey Brin has said that they will be available for everyone by 2017. Even if it won’t be first, Nissan is putting its foot on the gas.