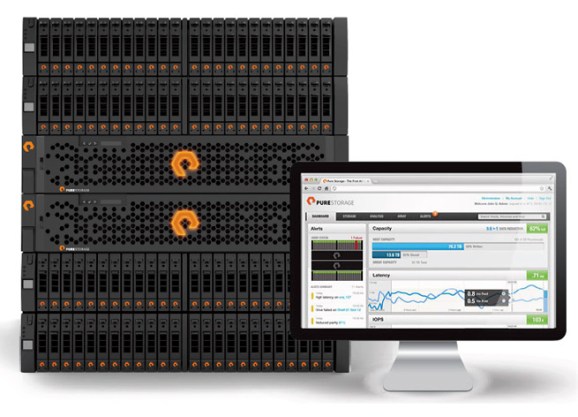 Enterprise flash storage bigshot Pure Storage has raised a massive $150 million in new funding to help give it the room to grow and continue to evangelize the power of all-flash storage arrays.

“First, this round is a about hitting the gas on international expansion,” Matt Kixmoeller, the VP of product and one of Pure’s first employees, told VentureBeat. “The second part is about accelerating our technology lead with our all-flash arrays.”

Kixmoeller said that EMC’s and NetApp’s attempts to offer flash storage helped draw more attention to Pure’s offering. “We feel like we got an early spot in the market,” Kixmoeller said. “But this round has been an extra validation for the market.”

T.Rowe Price and Tiger Global Management led the round, with participation from existing investors Greylock Partners, Index Ventures, Redpoint Ventures, Samsung Ventures, and Sutter Hill Ventures. The company last raised a $40 million round a year ago, and the new funding brings Pure’s total raised to $245 million.

This new cash should help the company continue an aggressive global expansion into Europe and Asia. In the past 10 months alone, Pure has started offering its arrays in 10 new countries: the U.K., Netherlands, Norway, South Africa, Denmark, Poland, Germany, Japan, Korea, Australia, and Singapore.

Kixmoeller said the company had no immediate plans to file for an initial public offering, but it left the door open for down the road. (Perhaps 2014?)

“We’re not in a particular rush to go to an IPO,” Kixmoeller said. “This funding gives us time to invest in growth.”

The Mountain View, Calif.-based Pure Storage was founded in 2009 and currently has about 230 employees. Kixmoeller said the company will be doubling its employees in the next year, with an emphasis on buffing up its marketing and engineering departments.