With $50 million in capital and a strategic partner with real-money online gambling firm Bwin.party, Win has become a real presence in the social casino game market. 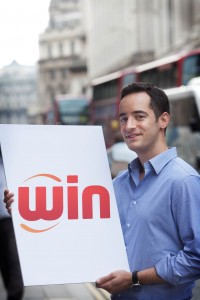 Founded just a year ago, the Gibraltar- and Tel Aviv-based social gaming company has fielded a number of casino games and announced today that it is launched a Garfield & Friends slot machine game for Facebook and iOS. And the company’s Slots Craze game has been installed more than a million times since its launch last March. The Garfield license joins others in the Win portfolio that include Casper the Friendly Ghost, Sherlock Holmes, Count Dracula, and the cast of the Wizard of Oz.

That progress is impressive for a company that is just a year old, but it’s a sign of the serious opportunity in social casino games, which have become a $1.7 billion market that is flooded with competitors ranging from Zynga to Caesar’s Entertainment. Chief executive Barak Rabinowitz [right] founded Win in March 2012 with funding from Bwin.party, a publicly traded Gibraltar company that operates real-money online gambling games. Bwin.party has a deal with Zynga to copublish real-money gambling games based on Zynga’s brands in the United Kingdom. But Win gives Bwin.party a side bet and a chance to directly benefit from the “for fun” social casino game market.

“We have the backing of an online gambling company, and a big one at that,” he said. “Bwin has a lot of expertise in making and marketing games.”

Win says that in Slots Craze, players have spun the slots more than 150 million times, winning more than 14 trillion virtual coins. Of the million installs, about 600,000 are on iOS, and 400,000 are on Facebook. The company also operates a portal where it plans to test its games, gather feedback, and then get them into shape to launch on more platforms. That follows the pattern of company’s like King, the maker of the popular Candy Crush Saga game.

Most social casino startups don’t have as much access to cash as Win. Bwin.party has a majority stake in Win, and it acquired a big development house in the Ukraine to support development. So while Win has around 25 game designers, producers, and marketers in Tel Aviv, it has access to 75 or more artists and other developers in the Ukraine. Rabinowitz says that gives the company a lot of development clout to churn out games on a regular basis and gives it a lower cost base as well to compete with its rivals. The company has also developed its own analytics, Winsight, that it believes can help it create games faster. Winsight is processing 100 million game events per day.

But Win’s rivals are formidable. They include IGT’s Double Down Casino game, Caesar’s Playtika, Gamesys, GameHouse, High 5 Casino, Plumbee, Zynga, and dozens of others. Rabinowitz has gathered an experienced team. He was previously chief executive of Mytopia, which was acquired by 888. He also ran Amuso (also acquired) and worked in Yahoo corporate development and at Morgan Stanley. Rabinowitz said his company has arrived late on the scene, but it is developing games at a high speed and is learning fast.

Still to come are more casino, bingo, and sports betting apps. Rabinowitz is targeting women over 35 who are the sweet spot of the market for social casino games. His development teams have two focuses. One concentrates on core games such as slots. The other incubates original ideas for games. Rabinowitz is particularly enthusiastic about sports betting games, where no single player has emerged as dominant yet.

“The market is challenging any way you cut it, but we can be patient and tune our games over time,” Rabinowitz said.