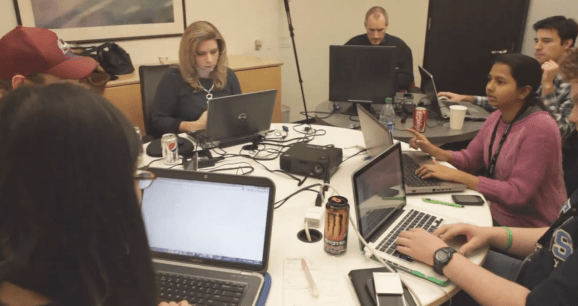 100 of the best college hackers from around the country are converging in San Francisco for the University Hacker Olympics (UHO).

ReadyForce and SignalFire cohost the second UHO from Sept. 13-Sept. 15 in what they claim is “the most epic university hackathon ever.”

Computer science students from 35 of the U.S.’s top engineering schools competed in a series of regional code challenges over the course of the year. The top students then filled out profiles detailing their technical accomplishments, and two to three students from each school were selected by a group of venture capitalists and chief technology officers.

“This is a very elite group of students,” said the event’s organizer Ahmed Siddiqui in an interview with VentureBeat. “You can’t buy your way in here; you have to be preselected. The aim is to identify the best talent and get them together with tech companies that want access to these students. They get exposed to real startups and awesome technology, and it could make a significant impact on their career.”

The ideas for the hackathon are chosen in advance by attending companies and are pitched to students on the first day of the competition. (The students decide which team they want to join). They will hack alongside engineers for 24 hours. Ultimately, one team will win, but the Ahmed said the real value is the “synergy” that happens by putting young, optimistic students together with more experienced engineers.

Sixty-six of the students have interned at top technology companies, and the average student already has three job offers — even those that are years away from graduating. Recruiting developer talent is highly competitive and a significant challenge for many tech companies, and the top students are in high-demand. Ahmed said that while this is “not a subset of students hurting for jobs,” many of them are not exposed to companies that don’t have armies of recruiters and campus ambassadors. Startups aren’t able to send people searching for talented engineers, and the University Hacker Olympics brings the talent to them.

SignalFire is a stealthy startup that is developing a network of “next generation founders and core engineers” through “exclusive experiential events. ReadyForce is a platform that brings top engineering students together with fast-growing startups. It embarked on a cross country bus trip on behalf of 150 technology companies to find talent last year and is beginning the second one again soon.