VB: Are these things meant for the home, or are they going to be wearable anywhere?

McGregor: Some will be things you can wear anywhere. A great example is the Nike FuelBand, or the Jawbone Up. People wear those all over the place. They’ve become part of a lifestyle. You’ll see things like rings. Some of the new watches and rings do things like enabling you to ride a transportation system or access your email and messages. Then there are other devices like home cooking thermometers, wireless thermometers. You can put it in a roast in the oven and sit in your living room with your gin and tonic and know when the roast is done.

It’s really varied. There’s going to be a lot of categories. If you make this thing so that you can put Internet connectivity into a consumer electronics device for less than 10 bucks, you’ll find it going into a lot of devices that already exist, and people are going to create new devices built around it. 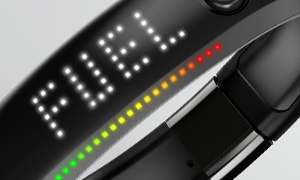 VB: For something like Kinect, a home system with a sensor at the center of it, what do you expect to happen in that kind of environment? If you take a wearable device and bring it into the Xbox One environment, what could you do with something like that?

McGregor: I think two trends are going to converge. A lot of the Internet service providers, as they look for bundles – selling you TV and phone and internet connectivity and so on – are looking at extending that to home automation and home security. Today, from a lot of those guys, you can buy systems that connect in. Say you left your garage door open. You can close your garage door remotely. You can lock your front door.

That’s going to tie in with games. As you wear devices and have things that provide sensors, you can interact with games. You can interact with your home system. It knows where you are. It turns the lights on and off. Those all start to tie together. As some people have written, it’s context. By wearing the sensors that measure information, you allow the systems around you to have a lot of context about you and what you’re doing. Whether that enables a game player or the AirVision or the lights in the room you’re in, they’re all variations on the same concept. I think we’re going to see a lot of richness in that area.

VB: It looks like ARM will probably be ubiquitous here, but there doesn’t seem to be the equivalent of an Intel in this space just yet.

McGregor: I don’t think there will be. We don’t need one. The processor demands of these devices are quite low. They’re easily satisfied by any of many processors. The thing that makes these devices useful is their connectivity, not their processing. That’s why this is a very significant area for us.

VB: What’s your catchphrase there? “It’s the wireless network, stupid?”

McGregor: Our slogan at Broadcom, since the early days, is “Connecting Everything.” That’s proven to be prophetic. We’re connecting everything. Broadcom powers the Internet backbone. 99.98 percent of all Internet traffic in the world flows across Broadcom chips. We have number one positions in pretty much all the home, last-mile technologies. For us this is a logical extension of the wireless, electronic nervous system, extending out to these remote devices. Making them inexpensive, making them proliferate.

We think that the standards that are going to drive these kinds of things are not so much x86 or instruction sets on processors. None of that matters. What matters is what protocols and standards they use to talk to each other.

I think Broadcom is the innovator in this space. To the extent that wearables are dependent on their connectivity to make them work, we have a strong leadership position here. We’ve come out with a number of new protocols, new standards. Our goal is to drive this forward and push it such that we enable a lot of new devices to come into the market.

VB: The wireless network is the computer?

McGregor: Well, that was the old Sun phrase. “The network is the computer.” They were ahead of themselves on that.