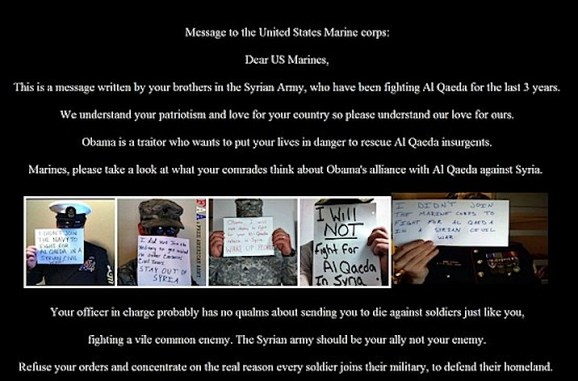 The Syrian Electronic Army hit the Marines’ recruiting website today, redirecting visitors to a separate website with images depicting “soldiers” who are against a military strike on Syria.

The SEA is a group of pro-regime hackers who most often target publications for their coverage of the conflict in Syria. The group often defaces websites or redirects them to its own website as an attempt to get their own messaging and propaganda across. Recently, the group reportedly hacked into Melbourne IT, a domain name registrar, and was able to take down the New York Times website.

Today, the group hit Marines.com, redirecting visitors to a letter to the United States Marine corp from “your brothers in the Syrian Army who have been fighting Al Qaeda for the last three years.” The letter goes on to urge Marines to abandon their orders and “concentrate on the reason every soldier joins their military, to defend their homeland.” It further called U.S. President Barack Obama a “traitor.”

The Marines confirmed in a statement that the visitors were being redirected to a separate website with this message, and that Marines.com itself was not otherwise tampered with. The site has been restored.