By all measures, RocketSpace has, well, rocketed to tech startup success.

Less than three years in, the tech office hub in San Francisco has acquired 75,000 square feet of high-end tech office space, filled it up with 550 people in 130 companies, graduated another 270 companies, seen its companies raise over $2 billion in funding, become home to “three or four” companies worth over $1 billion each, started a developer “grad school,” and built a startup-style innovation program for partners like Samsung, Microsoft, Sony, and British Airways.

And CEO Duncan Logan is just getting started.

“Today there are four tech clusters in the world: Silicon Valley, New York, London, and Tel Aviv,” Logan told me recently in Vancouver. “When it’s all said and done, I think there’ll be 50, and we want to be the nucleus in each of those 50. We want people to associate good startups with RocketSpace in the same way you’d think law with Harvard, or tech with MIT.” 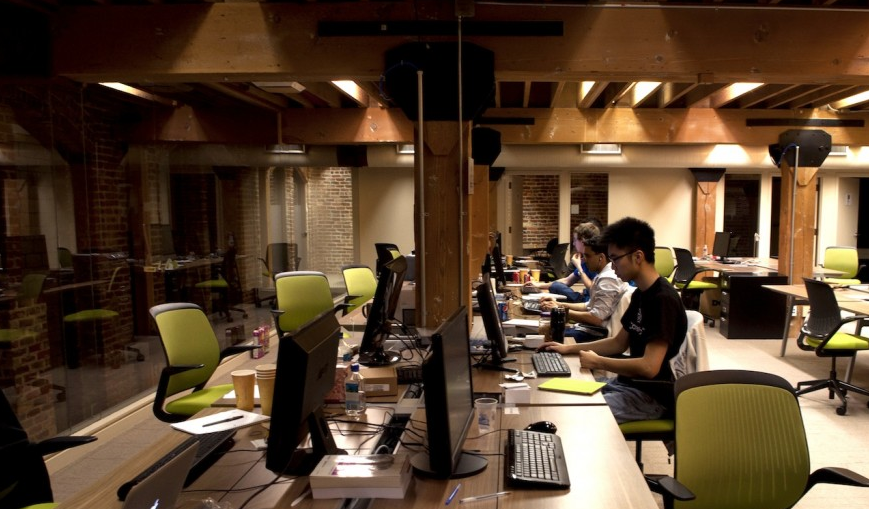 RocketSpace is one of the hottest tickets in an already-overheated San Francisco commercial real estate market. Thirty new companies apply every week — essentially, begging for the privilege of spending $800 an employee per month for premium Google-style workspace for their two, 10, or 50employees.

And it’s a new model in the startup ecosystem, a model in which all the components of a successful ecosystem are brought together to rub shoulders, spark ideas, and create magic: smart people, startups, investors, mature companies, and a space that throws them all into one big pile to mix.

The reason companies are clamoring to get in, of course, is the chance to rub shoulders with the elite of the startup world.

Big names like Uber, Spotify, SuperCell, and Zappos work out of RocketSpace. Hot startups like Leap Motion and Zaarly and Kabam litter the floor. You can join RocketSpace at the accelerator level and join other young companies with 2-15 employees on a big open floor. Or you can plug into the suites level, which gives you a little more privacy in your company’s own pod or suite. $800/month/seat gets you everything you would otherwise have to manage and maintain: space, desks, chairs, meeting rooms, cafeteria, and Internet. 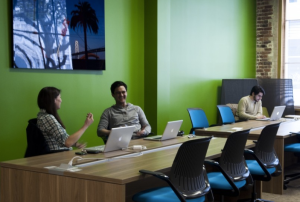 “Our whole concept is that you are a product of your environment,” Logan says. “We only let in tech companies, and we need those companies to be at the same stage — they have to have raised at least one round of funding, which sets the quality bar.”

That seems to be working.

“If you add up all the funding rounds raised by the companies in RocketSpace, it’s about $2 billion in 30 months,” Logan told me. “There isn’t another building in the world where that’s happened.”

There are other benefits to being at RocketSpace, however. One is an even more essential fuel for startups than funding: a constant influx of high-potential employees.

“A huge part of an entrepreneur’s job is that he and his team are recruiting above the bar,” Logan told me. So RocketSpace has a training program right in house — it’s called RocketU. “RocketU is a bootcamp training program for developers,” Logan explained.

The 10-week program takes in developers with a CompSci degree or significant existing experience — and a passion for code — and puts them through a grueling program that takes them from competent or even good, to great. RocketSpace charges for the course, and then takes a payment from hiring companies when it places them. And, of course, RocketU grads take a desk in the facility when they’re hired.

All of which helps RocketSpace be profitable today, even in the pricey San Francisco real estate market. 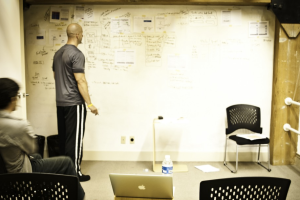 Another service for resident companies is RocketSpace’s open innovation programs, in which it helps major multinationals like General Motors, Sony, and Samsung access the best and brightest ideas of the hottest startups at internal “demo days.” 60 percent of those demo days end up in a commercialization trial or a partnership.

The multinationals pay to access the talent, and the startups get marquee customers.

“We help them navigate very early stage startups and partner with them,” Eryc Branham, RocketSpace’s Chief Revenue Officer, told me.

The multiple revenue models take the place of the traditional accelerator or investor model of taking stock. And they’ve helped RocketSpace reach profitability much quicker — and more reliably — than accelerators or angels or VC firms. Essentially, the company is selling picks and shovels to the digital age miners.

The company will never hit the big score mother lode. But it will also never die from insufficient ROI.

“We don’t take any equity — some of the top companies wouldn’t have come to us if we did,” Logan says. “Do I wish I had one percent of Uber? Yes! But … we’re profitable now.”