PC game fans are eagerly awaiting today’s release of Total War: Rome II, the latest in the Total War real-time strategy series from Sega’s Creative Assembly. Those players will deal with the same immediate question once they start playing: Which lands should you conquer first?

Rome II will return you to epic clashes of empires across stunning panoramic landscapes, only bigger and better than its predecessor, Rome: Total War, which came out nine years ago. During that time, Creative Assembly has honed its graphics skills and found a better interface for managing a far-flung empire.

Like the first Rome game, which sold very well, this title has the potential to break into the mainstream if only to bring out the conqueror in all of us. Hopefully, it will promote world peace. After all, now that I’ve played, I no longer feel the need to pillage my neighbor’s house or the rest of the world. Crossing the Alps? Been there; done that.

In this combination of Civilization-style military strategy and real-time combat akin to Age of Empires, you begin as a humble tribe in control of a single province of Italy. Your aim is to build the Roman empire, city by city, region by region, from Britannia to the edge of India. A short tutorial shows how the Romans took on the hill tribe of the Samnites. At the beginning of the single-player campaign, in the year 272 B.C., just about any region can become an empire. The Romans must conquer the Etruscan League, their foes to the north. After that, you the player are free to venture anywhere though sometimes you launch campaigns at the behest of the Senate. If there is a crowning accomplishment to Rome II, it’s this. It feels like an open world, an infinitely replayable space where you can choose the course to greatness or ruin.

You can expand further north into the lands of the Veneti or drive south to Syracuse and Carthage. The enemies may come at you from all sides, or even from within, through political intrigue and civil war before you finish building your war machine. You can win via cultural or economic victories in addition to conquest, but you have no real choice. Your empire has to expand or die. If you fight everyone at once, you’ll lose. I found this the hard way as I started and then restarted my empire several times. You should feel free to start and stop as well because you’ll be stuck with those early choices for a long time.

You can actually skip the tactical battles if you are infatuated with the strategic game. You can automatically resolve a battle, sort of like a coin toss weighted with all sorts of modifiers. But then you would be missing the best part, and the game would be a poor stepchild compared to Civilization.

The battles are what this game is about. In them, you move your soldiers in cohort-size formations, attacking and countering the enemy as their commander does the same thing. Once the armies lock arms in battle, only one of them comes out standing from the brawling mass that resembles two beehives in combat.

If you played every battle, the game would be longer. But it’s also more fun. I’ve played the single-player campaign for 23 hours now, and I’ve only consolidated control over Italy, Sardinia, Corsica, Syracuse, and Carthage. I have enlisted the Ligurians in the north and the Syracusans in the south as my allies, extending my power through them. But there is so much more territory for me to explore and conquer, not counting the historical single-player battles, multiplayer online combat, and the Greek States day-one expansion pack. 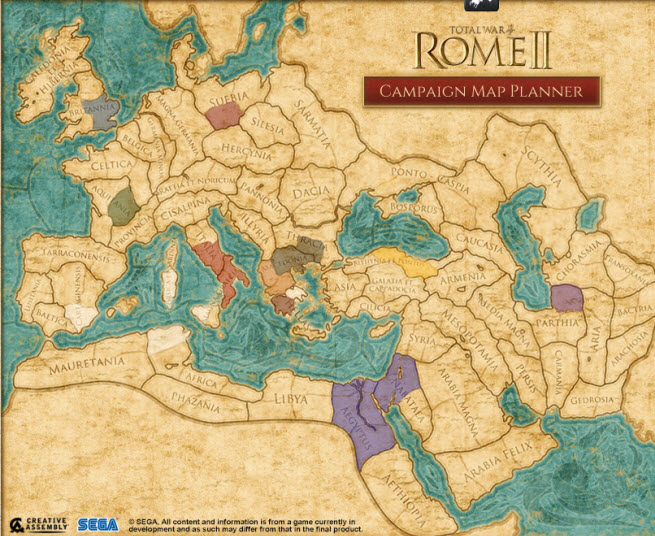 Rome II is very educational, and parents will be tempted to use it as a learning tool, but there’s no hiding the fact that it is a very deep and detailed strategy game. Hardcore players love this kind of stuff, but controlling what happens in the real-time battles takes practice. If you’re familiar with the user interface of the past games, this one isn’t that different. The beautiful, strategic map is layered upon the individual tactical battlefields. When you hover over a region, you see its vital statistics such as its size, happiness, and security levels.

The gameplay is familiar to past fans. You maneuver your armies on the turn-based campaign map, and when two armies meet, the game zooms in on a 3D battlefield where they clash in real time. In this action, you can zoom out to see the full strategic picture from a bird’s-eye view or zoom in on an individual cohort as it engages in a pitched tactical battle. The cinematic, movie-like view on the ground is very well done, with the sounds and screams of combat integrated with the animated 3D graphics of the soldiers. Those battles look good, and they can tell you exactly how your troops are faring, but the cinematic view isn’t necessary to running the battle.

You start out with a short tutorial campaign against the Samnites. This campaign shows you the complexity of the world, including the military gameplay, the economic decisions, and the political battles. The campaign at the first battle at Capua is meant to give you a hang of the 3D controls. You can maneuver through the battlefield with the WASD keys on your keyboard, and you can rotate the map with the Q or E keys. That gives you control over the 3D view. You can group your soldiers into battle groups, change their formations, and line them up one next to the other so they can all give each other morale boosts. But once you set them loose into battle, it’s up to them to win.

The most common way to fight is to pin down the enemy with your infantry, such as your swordsmen. You can take out a lot of soldiers with archers. But the cavalry is best for maneuvering around the enemy and then hitting them on the flanks, resulting in massive kills. Once you launch a good flank attack, the odds are good that the defenders will collapse and run. And once you get some enemies on the run, the rest will likely follow. If you learn that much, you’ll be able to take out enemy armies that are larger than your own.

Another new tactical element that helps you fight is “true line-of-sight.” This means that you and the enemy can only see forces arrayed on the battlefield if they are within the line of sight of one of your own units. If you hide some troops in the trees, they can come out during the battle and ambush the enemy.

Once you take over a city, you’ll find that it is connected to as many as three others in a province. To control the province, you’ll have to take over the walled capital city. That means you can either besiege the city and starve out the inhabitants. Or you can build siege weapons and storm it by force. The good thing is that you don’t have to spend time building the actual siege weapons. You simply select them during the siege and wait until they are finished. Then you’ll have either sheltered battering rams or siege towers to assault the ramparts. Once you fight a battle, you can immediately save it for replays if you wish.

A vast empire to conquer and defend

The huge variety of strategic options is one of the joys of Rome II, which is the most ambitious game yet from Sega’s Creative Assembly. I’ve only scratched the surface of it. There are 10,000 unique battlefields available across the map, including battles that take place in the sea or in major rivers like the Nile. The huge map ensures that you’ll never run out of random or strategic places to meet the enemy. But the map of Europe, North Africa, and Near Asia is designed with a lot of strategic choke points such as roads through forests or river crossings where you can set up ambushes or forts. You can fight in these locations or do battle in great walled cities, commerce ports, or barbarian villages. The title features more than 700 different unique tactical units, from war elephants to slingshot troops.

There are nine playable factions at the start, including Rome, Carthage, Ptolemaic Egypt, Macedon, Pontus, Parthia, the Suebi, the Averni, and the Iceni. I played the Romans, of course, but I gained an appreciation for the different kinds of units that I fought against. The Carthaginians led their armies with archers mounted atop elephants. Those elephants could be dangerous if you allow them to charge. But I took them out with my own onslaught of arrows. The bad thing about elephants is that they wreak havoc among your own troops once they start getting wounded and then panic. They run around wildly and cause a lot of disruption in the ranks.

Each faction is part of a different cultural group: Roman, Hellenic, Eastern, and Barbarian. Each faction also has its own historical missions, its own geographical starting position, its own tech trees, famous generals, agent variants, units, traits, and benefits. The Eastern factions are great traders while the Barbarians have high morale in battle. Roman provincial capitals can be hubs for complex military organizations while the Greeks have strong cultures.