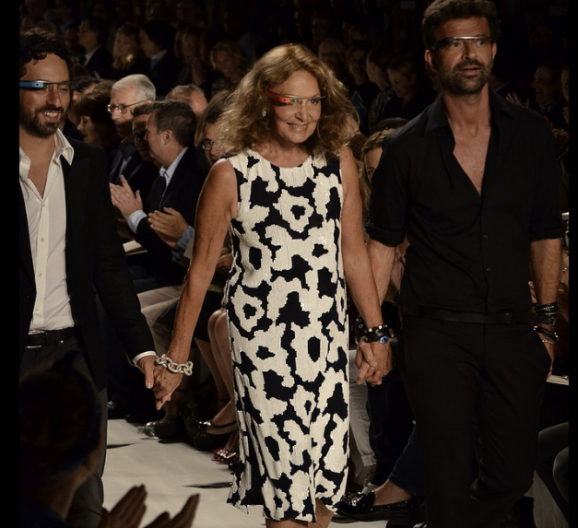 This weekend, VentureBeat exclusively published images of the Samsung Galaxy Gear smartwatch prototype that was sent to a few select developers ahead of the official launch on Sept. 4. The photos spread like wildfire and generated a great deal of discussion about whether consumers are ready for a smartwatch.

Companies like Microsoft and Sony are also angling to capture a share of the market, which analysts believe is poised to explode. The pitch is that it’s all the best bits of a smartphone — a camera, bluetooth, social media applications — ported to a wristwatch. And as VentureBeat‘s Dylan Tweney puts it, “The wrist is where it’s at for wearables.”

But consumers won’t wear devices that are expensive or obnoxious or that garner the wrong kind of attention. And they certainly won’t spend $300 or more on a device that looks like an evolved calculator watch.

After all, once you put a device on your body, it becomes an expression of who you are.

Pushing wearables into the mainstream

There’s the market of early adopters, who will rush to buy any new gadget. That’s the minority of consumers. For the rest of us, the device has to provide real functional value, or it has to be perceived as so hip that it’s worth the investment.

To reach a larger market of consumers, smartwatch manufacturers need to consider their target demographic. Gender is an important consideration — and is not addressed by simply pairing the device with pink or blue straps. Any fashion editor will tell you that watches have had a complicated gender history.

Men were once reluctant to buy wristwatches, as pocket watches were considered more masculine. This has changed over the years, with big, chunky watches coming into fashion, like Casio’s G-Shock line. Retro-inspired watches have also recently become a hot trend. Some hipsters have ditched watches altogether, as their smartphones tell the time. The market for watches is still huge, however, and they come in a variety of shapes and sizes to cater to both men and women.

Wearable technology will need to experience a similar diversification before it becomes a serious trend.

“Wearable gadgets are, in a word, accessories, which means the tech industry needs to get women on board first if they want their products to sell,” said Verena von Pfetten, executive digital director of Lucky Magazine. “Women are not only one of the highest spending demographics when it comes to tech, they’re also early adopters and incredible influencers — especially when it comes to the fashion industry.”

Moreover, consumers will be need to understand how to accessorize their device and how it fits into their life — as a fitness tracker to bring to the gym, perhaps, or a camera for long hikes? It’s not simply enough to build a cool technology product and emphasize the available features. To market smartwatches effectively, gadget makers will need to forge partnerships with fashion brands, retailers, and the media.

“What’s so interesting about fashion is that no matter how ugly something is, if it’s framed the right way and endorsed by the right people, it can become a trend,” said Nicolette Mason, a fashion editor for Italian Vogue and Refinery29, and a monthly contributor to Marie Claire Magazine.

Mason was referring to Google Glass, a device that she believes is “hideous” but that has succeeded in hitting the fashion pages nonetheless. Props to the Google Glass marketing team — the device was originally just for super nerds, but with the right branding, it has been propelled to the hallowed runways of New York Fashion Week.

Indeed, the worlds of hi-tech and fashion were once segregated. But the wearable technology trend, which stands to be worth up to $50 billion by 2017 according to Credit Suisse, is forcing the two industries to converge.

Tech entrepreneurs are realizing that they need to attract the attention of the influential fashion editors and designers who set the trends.

“The fashion community is just usually first to redefine, invent and adopt what is seen as wearable,” said Aubrie Pagano, chief executive of Bow & Drape, an East Coast based fashion startup.

Google learned this lesson the hard way when Glass was first released to a select few developers. Google was earlier rumored to be in talks with hipster fashion brand Warby Parker (a spokesperson now denies it). It struck up a partnership with Diane Von Furstenberg last year, and models strutted down the runway wearing Glass, making the device briefly seem like an ‘it accessory’ for professional women.

Despite those efforts, after its limited release this year the device was pilloried in the media for its awkward design, popping up in a hilarious parody sketch on Saturday Night Live. The device’s limited appeal for women was exemplified by the popular Tumblr blog White Men Wearing Google Glass.

The Google Glass team appears to have shifted strategy in recent months, under the leadership of fashion-conscious lead industrial designer Isabelle Olsson. It appeared in a futuristic Vogue photo feature.

Mason still wouldn’t probably feature the device on her fashion page, as “aesthetics matter” to her, but Glass is on its way to becoming cool-ish — at least in an ironic way.

Above: Misfit’s Shine device has been described as
‘futuristic jewelry’

Misfit Wearables‘ chief executive Sonny Vu told me that wearables either need to be “gorgeous or invisible”; otherwise, they’ll fall flat with consumers. In light of the reaction to Samsung’s smartwatch, that conversation now seems remarkably prescient.

Vu has a team of user experience designers, who are working on building devices that consumers will be proud to wear. He said that most wearables resemble sci-fi devices and are “not all that wearable yet.” At a recent dinner, he elaborated on that theme, claiming that most devices are “designed by Silicon Valley males for Silicon Valley males.”

Of the two options, Vu’s company opted for the gorgeous. Misfit’s fitness tracker, Shine, is designed to appeal to stylish and fitness-obsessed women. The Shine acts as an activity monitor, sleep tracker, and watch all in one. It comes with a variety of accessories and can be worn as a necklace or on a clasp. So you can wear it the way that suits your individual style.

Misfit isn’t the only option for the style-obsessed: BodyMedia unveiled its first jewelry-like product — a fashion-forward armband — at the Consumer Electronics Show in January.

For fashionistas, there still isn’t much on the market yet. The wearables tech trend has a long way to go. I’m most curious about Apple’s entrance into the space, and whether the company will settle on a device with beauty, brains, or both. Apple still hasn’t confirmed the existence of its hotly-anticipated iWatch, but rumors are circulating that the device will hit the market later this year or 2014.