Having trouble managing your personal finances? Check is one of a handful of new applications to help you pay bills from a smartphone advice. 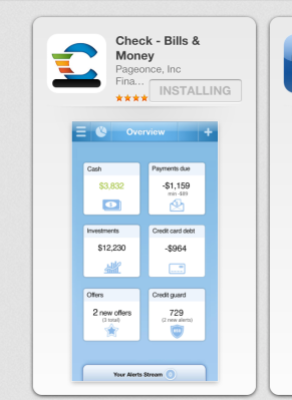 Above: The Check app is available to download free of charge

Check is fast becoming a hit with consumers, registering 10 million customers in 2012. Off the back of this growth, the team just secured an additional $24 million in its third round of venture financing.

Check hopes to unseat Intuit-owned Mint.com as the most popular tool to manage your finances. It is part of a new breed of Silicon Valley companies that are helping business and consumers simply the payment process.

The app is available on both IOS and Android, and is free for consumers to use. The app can help you manage finances on the go, but it also alerts you when it’s time to pay rent or a phone bill. Once you login, you’re given the option to track your money or pay a bill — set up an account, and you’re good to go.

According to chief executive Guy Goldstein, what separates Check from the pack (HelloWallet, Concur, Mint) is its ability to aggregate all your bills in one centralized dashboard. Check also guarantees its customers bank-level security, so you won’t need to worry about being hacked.

Check, which recently changed its name from PageOnce, is also popular with small businesses that need to transfer money in a matter of seconds. The company makes its money by charging a 4 percent fee when payments are made via a credit card.

Goldstein positions the company as far more than a personal finance app.

“We’re at the intersection of two major industries — mobile and payments,” he told me.

He recently began reaching out to large enterprises, and is securing some lucrative partnerships. In June, Check announced that Alltel Corp.‘s 600,000 customers will pay their bills using Check. Goldstein claims that this is just the tip of the iceberg, as many companies would like to offer their customers the option to pay from a smartphone device.

Check has raised $49 million to date, which seems sizable, given that the app got its start in 2010. “Being significant in the mobile payment market requires substantial capital,” Goldstein explained.

Menlo Ventures led the funding round, with participation from Morgenthaler Ventures and Pitango Ventures. As part of the terms of the funding, Menlo Ventures’ Doug Carlisle and Avery More, founder and former CEO of CompuCom, joined the company’s board.