Jawbone doesn’t do simple upgrades. The gadget maker made a splash with its Jawbone wireless speaker back in 2010 — it was small, relatively inexpensive at $199, and best of all it sounded great for its size. Last year it unveiled the Big Jambox, a larger speaker that offered better quality sound for the discerning listener.

Where most companies would be quick to release a sequel to a popular gadget, Jawbone let the Jambox sit in the market for three years without touching the hardware. Finally, we have its successor.

Today the company is unveiling the Mini Jambox ($179), a lighter and thinner wireless speaker that makes its elder sibling seem downright chunky. It’s built out of a single aluminum frame, sports 10 hours of battery life, and most importantly, it’s shockingly thin at just 24.5 millimeters wide (nearly half as thick as the original). 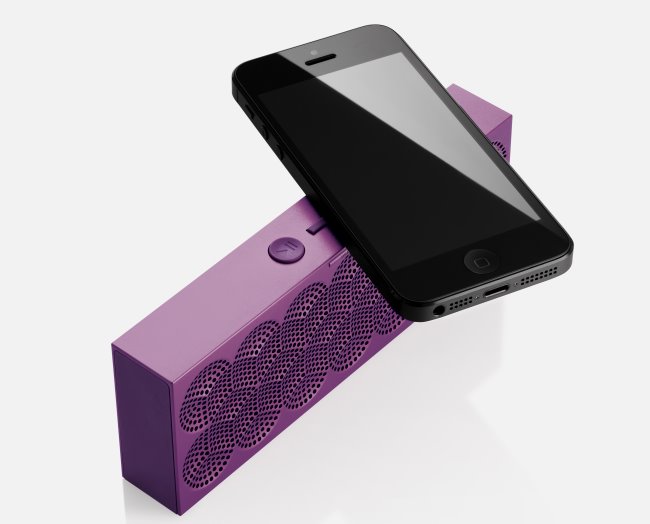 Jawbone sparked the popularity of the wireless speaker market with the original Jambox, and now there are dozens of competitors — from established companies like Logitech, to tiny startups — all claiming something superior to the Jambox. But rather than compete head-on with the competition when it comes to things like specs and loudness, Jawbone instead decided to focus on a new problem: Making a wireless speaker that’s small enough to take everywhere, without even thinking about it.

“We believe that how a product fits into someone’s life is as important as how it works,” said Travis Bogard, Jawbone’s vice president of product management and strategy, in an interview with VentureBeat last week. The company wasn’t just content to release a slightly better Jambox — it wanted a product that would be fundamentally different.

That may just sound like marketing fluff, but after using the Mini Jambox over the weekend, I can see why Jawbone believes it’s doing something entirely new. The Mini Jambox looks similar to the original side-by-side, but it offers a much more refined experience. It weighs a third less than the original, which means you won’t hesitate to slip it in your bag or pocket, and its solid metal construction feels completely unlike any wireless speaker I’ve used so far.

And even though the Mini Jambox is significantly slimmer than the original, it sounds just as good. I threw a wide variety of genres at the speaker, and it consistently surprised me (you wouldn’t think something this size could produce thumping bass, but you’d be surprised). You’d never mistake the Mini Jambox for a decent set of stereo speakers, but for something this portable its sound quality is impressive.

“It’s more than just that exterior being a beautiful canvas, it’s also become the perfect rigid cavity for the acoustics — literally the skin and skeleton are one and the same,” Bogard said, explaining how the company was able to get big sound out of such a tiny box.

Since it weighs around the size of a typical paperback, I often forgot I had it stowed within my messenger bag. And it often came in handy when I least expected it to — like an impromptu conference call with a group of co-workers, or during a picnic with friends. It also came in handy when I wanted to watch some video clips on my iPad.

As great as the Mini Jambox is, it remains to be seen if the company’s vision of making portable speakers as essential as our smartphones will come true. Mini Jambox is available for pre-order today on Jawbone’s site, a release date hasn’t been announced yet. Jawbone will keep the original Jambox around at a lower price of $149, while the Big Jambox remains at $299.

Jawbone is also releasing a new Jambox app for the iPhone and Android that lets you control the speaker’s settings, as well as serve as a hub for all of your playlists. On the iPhone, the Jawbone app can combine your Spotify, Rdio, and local music playlists on a single screen (something I haven’t seen before in any music app). The unified playlist feature will eventually make its way to Android.

While Jawbone seems to have been distracted by its Up fitness band over the past year (including a disastrous initial launch where it had to offer refunds to all of its customers), its nice to see the company is still able to innovate in the audio world. Though at this point, I’m not sure where else it can take the Jambox line (perhaps a slightly thinner, but still full-sounding Big Jambox successor?).