Man, being a mercenary must suck. I mean, you get a lot of money, and you also to get to shoot stuff (mostly people). Still, I imagine that the constant betrayal and bullet wounds must get pretty tiring, at least if Killzone: Mercenary is anything to go by.

Coming out Sept. 10 in the U.S., Killzone: Mercenary is a first-person shooter for Sony’s newest handeheld, the PlayStation Vita. Mercenary hopes to bring console-quality shooting, offline and on, to the portable space. And, thanks to the Vita’s powerful hardware and two analog sticks, it pretty much does just that.

In a lot of ways, Killzone: Mercenary is just another military shooter, albeit one with a dash of sci-fi elements. But these don’t really do much to differentiate it from its competitors. And while I feel silly praising competence, I’m willing to give Mercenary some slack for lacking in the originality department just because it does something I haven’t seen in a handheld game before. It’s a portable shooter that doesn’t just make me wish I was playing on a PC or console.

Plenty of Vita games look good, but Mercenary stands out as the most visually impressive title I’ve seen yet on Sony’s handheld. It really doesn’t look far off from something you’d expect from a PlayStation 3 game. Details fill each area, impressive lighting adds a nice layer of immersion and realism, and even little touches, like the spray of a crashing wave, will impress you.

Mercenary also performs great, Even when enemies littered the screen, I never noticed any real slow-down or other hiccups. If you’re looking for a technical showpiece for the Vita, this is it. 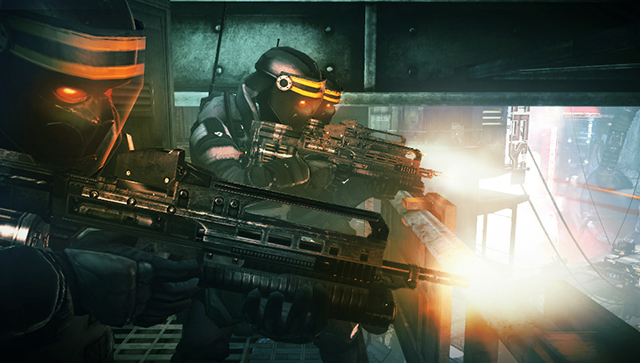 It’s all about the money

Mercenary really runs with the whole, you know, “mercenary” theme. Almost everything positive you do can earns you cash, from killing enemies to picking up spare ammo. You can then use the cash to buy new weapons and other goodies from kiosks liberally placed throughout the campaign or in the multiplayer lobby. This is actually your only way of getting new firepower, since foes won’t drop their weapons, so you’ll depend on these little stores. I appreciate that you have to earn upgrades to your arsenal and not just hope to blindly stumble upon them.

You can also unlock Vanguards, which are more specialized abilities that you can use after a short charging period. These include things such as airstrikes or a robot probe that can sneakily kill people from behind. Some even make fun use of the Vita’s touchscreen, like a rocket launcher that launches at any enemy you tap on your screen.

Money also plays a big part in the multiplayer component. Cash, not kills, determines winners. It’s also how you increase your rank.

Speaking of that multiplayer component, it really is pretty cool to have such a polished, competitive shooter experience on a handheld. You won’t find any remarkable new ideas, but you’ll enjoy yourself if you’re a fan of chaotic, fast-paced deathmatch experiences like the ones you’d find in stuff like Call of Duty or Halo. Maps are small enough to keep the action constant, and frequent Vanguard drops, which will quickly grant you one of the megaweapons, keep players from hiding.

I also really like how you can interrogate other players. If you sneak up on someone and try to execute them, you’ll also learn the position of every other player on the map. Of course, by “interrogating,” I really mean smashing their head into the ground, but it’s a cool incentive for multiplayer stealth. 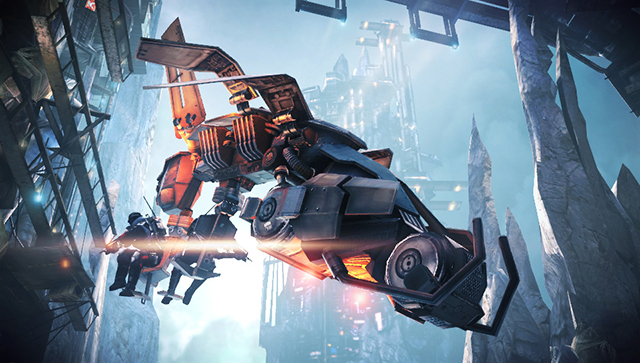 Mercenary reminds me of Uncharted: Golden Abyss in some ways. They’re both portable versions of popular Sony shooters that act as a technical showpiece for the Vita. Golden Abyss, however, also tried really hard to show off the Vita’s touchscreen and gyroscope controls, which resulted in a bunch of unnecessary gimmicks like scratching dirt off of artifacts and swiping the screen to chop away at overgrown bushes.

Not that Mercenary doesn’t use the touchscreen. I already talked about those missiles you send flying through touch. You also use the screen for the obligatory hacking minigame that some video game king must have mandated be a part of every shooter. You’ll also have to do some unnecessary quick-time finger-swiping for melee kills. Still, most of this stuff is relatively tasteful, and some, like those missiles, are actually kind of neat.

I’m trying to tell you that the plot is uninspired and boring. The few attempts at emotion, like an orphaned boy who you have to occasionally escort, are pathetic. It’s all set in a war between two worlds that both seem pretty evil and terrible, so you can’t really emphasize or cheer for anyone. It’s also a pretty short campaign. You can get through it in a few hours.

The story also offers few gameplay surprises. It’s mostly shooting with few twists, and the few attempts to break up the monotony include clichés like shooting a mounted gun from a helicopter.

What do you judge Killzone: Mercenary against? It’s a polished shooter, and it’s undeniably fun to play. Still, set up against console shooters, it’s really nothing special. But as a portable game, it offers an unrivaled experience for anyone looking to get their FPS thrills away from their PC or TV. And if you’ve been starving for Vita software, this is a great showcase that could really impress friends just from a technical standpoint.

Just don’t expect any emotional resonance or a thought-inducing story. In Mercenary, you really are just in it for the money.

Killzone: Mercenary comes out for the PlayStation Vita on Sept. 10. The publisher provided GamesBeat with a digital copy for this review.