For an investigative journalist, Miles Upshur isn’t very smart. As the protagonist of Outlast, the new game from independent developer Red Barrels, he breaks into a supposedly abandoned insane asylum called Mount Massive armed with only a camcorder and the survival instincts of a moth near a bug zapper. Naturally, this is a very bad idea.

Outlast is a first-person survival horror experience available now for PC, and for the PlayStation 4 sometime in 2014. It’s similar to Frictional Games’ Amnesia: The Dark Descent. It’s heavily influenced by found-footage films like The Blair Witch Project and [Rec], and its story, mostly told through scattered notes and documents, is based on Project MKUltra, a real-life covert government operation that conducted experiments in brainwashing, hypnosis, and behavior modification on human beings without their knowledge. It’s also the scariest game I’ve played in recent memory.

It took about 10 minutes for Outlast to give me my first jump scare, a TV set that randomly turned on when I approached it. It was clichéd, old school. I can’t believe I fell for it. It took another 10 minutes for me to scream out loud. I imagine I threw in a few choice four-letter words as well. By the time that first session ended, my hands were sweating as I gripped the controller, my stomach was in knots, and I had the sudden urge to go do something else. Wash dishes. Text friends. Browse cuteoverload.com. Anything to take my mind off of Mount Massive Asylum, its bloodied hallways, and its crazed inhabitants.

Outlast is going to draw inevitable comparisons to Amnesia. Like Amnesia, part of the what makes it such a terrifying experience is the fact there’s no combat. When confronted by one of the game’s numerous gibbering, violent inmates, the only options you have are to run, hide, or die. The camcorder has a night vision mode powered by batteries found throughout the building, and it’s the only way you can navigate through many of the game’s pitch black areas. There’s really no puzzles to solve outside of throwing a few switches or finding the occasional key card. Outlast is a game with a singular purpose: to scare the crap out of you. And on that level, it succeeds brilliantly.

For a horror game to be successful, it needs to get the sound right, and Red Barrels has done an excellent job of using it to crank the tension up to 11. Mount Massive is filled with discordant and unexpected noises meant to unsettle you, like the aforementioned television set. Miles’ breath becomes louder and more ragged the closer he gets to something horrific. The few characters who speak in the game are creepy and well-acted. One particular standout is a pair of inmates who talk among themselves in strangely detached tones about how they’re going to kill you. I immediately dreaded continuing on, knowing those two would be out there somewhere hunting me.

There’s no manual save

While the lack of combat is designed to instill a sense of helplessness in the player, it’s a little annoying when paired with an automated checkpoint save system. Dying at the hands of an inmate will set you back a small amount, forcing you to replay certain areas multiple times if you’re unlucky in escaping. Even using the “Save and Exit” option in the main menu at the end of a session will send you back to a checkpoint instead of saving your progress in that exact spot. It’s a minor irritation for a PC gamer used to the comfort of quick saving.

Night vision is an integral part of the game, yet it chews through batteries aggressively. Although I never found myself completely out of batteries, they were scarce enough to keep my stress levels high as I cowered under beds in the dark, listening for signs of pursuit. Battery longevity can easily be fixed in a patch, however, and Red Barrels says it’s fine-tuning the mechanic.

I can’t say that Outlast is a “fun” game. It’s stressful and terrifying in a way that most recent horror games can’t match. The frights found in Outlast are nothing new. I’ve seen them in other horror games and movies many, many times. I’m jaded, I told myself. This stuff shouldn’t affect me — but it did. Other reviewers might tell you to play it in the dark with headphones on to get the full effect. I say play it in a brightly lit room surrounded by pictures of kittens. The heart can only take so much.

Outlast is out now for the PC. A PlayStation 4 version is due sometime in 2014. The publisher provided GamesBeat with a PC copy for the purpose of this review. 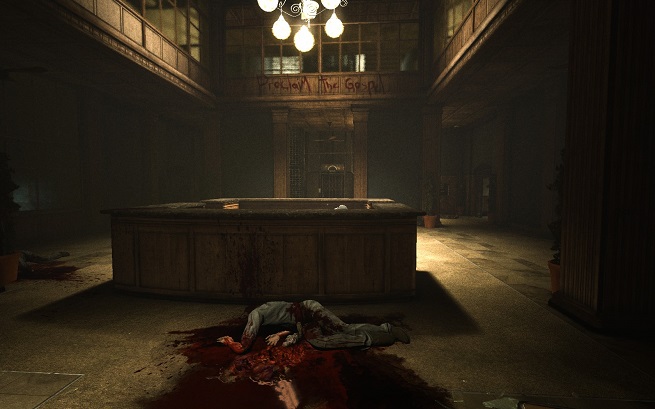 Above: The lobby of Mount Massive Asylum.