On stage at its IFA media event in Berlin today, Samsung mobile head JK Shin revealed the smartwatch by casually sending a message from his Galaxy Note 3 smartphone to the Gear on his wrist.

The Galaxy Gear looks a lot like the earlier images we’ve published, except with slightly rounder edges. There are still visible screws on the front, and the screen looks about the size we were expecting. While Samsung hasn’t officially revealed pricing details, Bloomberg reports the Gear will be available on September 25 for $299.

“We wanted to make a wearable of tomorrow that is designed for everyone,” said Pranav Mistry, head of Samsung’s think tank, as he introduced the Galaxy Gear. 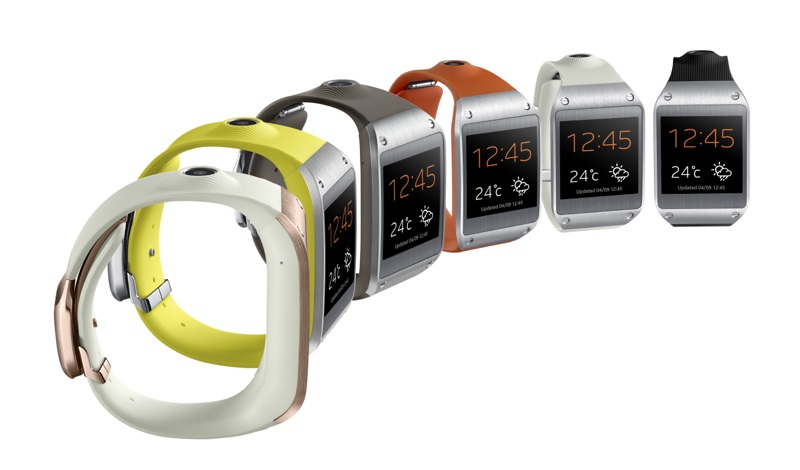 The Gear sports a 1.63-inch AMOLED display (smaller than we previously thought), a camera on the wristband, and 70 apps. The camera is a mere 1.93 megapixels, and you can take pics simply by swiping. It can shoot short 720p videos, which should make it useful for all the Vine addicts out there. You can also take calls by holding the Gear to your ear.

Under the hood, the Galaxy Gear is powered by an 800 megahertz single core processor. There’s also a gyroscope, pedometer, and accelerometer built in. The launch apps include fitness mainstays like RunKeeper, as well services like eBay and TripIt.

When it launches later this month, the Gear will only be able to connect to Galaxy devices running Android 4.3. At this point, only the Galaxy Note 3 and Note 10.1 2013 tablet apply, but Samsung says the Galaxy S4 will be getting updated soon.

While the Gear doesn’t look as chunky as the early images we saw, it still seems larger than most consumers would like. It may be the nicest smartwatch yet, but considering its limited connectivity so far, it’s not going to be the one that becomes a mainstream success.

“With Gear, we have opened up a new chapter, a new direction to an exciting world of possibilities. With Gear, Samsung reinvents a centuries-old object. Galaxy Gear is an engineering marvel — it defines tomorrow,” Mistry said.