Andreas Gauger is Chief Marketing Officer and Co-Founder of ProfitBricks.

Pricing for cloud computing of Amazon is inflated. The general impression that Amazon’s cloud margins are low and kept low by constant price cuts is far from the truth.

The reality is Amazon Web Services gross margins continue to grow and are now likely over 80 percent today.

How do I know this?  Working in the hosting/cloud business for the last 18 years and calculating all of 1&1’s hosting pricing from 1995 to 2010, and now all pricing for ProfitBricks, I can deliver calculations that will allow us to draw some general conclusions about Amazon’s cloud business.

Since Amazon doesn’t supply any data to calculate their margins with absolute certainty, I made some very reasonable assumptions based on my unique experience to get a general ballpark.

The first chart is my prediction of the “manufacturing cost” of an Amazon M1 large instance from October 2007 until today. 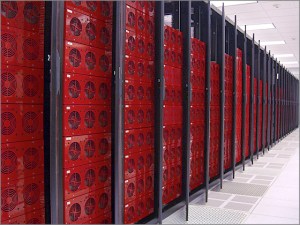 For cost I calculated hardware capital expense (CAPEX) depreciated over 3 years, cost of goods (COGS) for energy and cooling, and “rent“ for the space needed in a datacenter. I did not include cost for the development of the platform or the management of the platform because these costs do not grow in parallel to the amount of servers in the datacenter. Development costs remain almost fixed no matter how many servers you deploy. Management costs certainly rise with more servers but very slowly (so it’s nearly fixed as well), and in big datacenter installations they are very small compared to the rest of the costs, so I have not included them into the equation.

Amazon’s on-demand price for this instance is $0.24, creating an estimated gross margin of 92.5%.

Based on my estimated hardware CAPEX and datacenter COGS in July 2013, I calculated these costs from October 2007 to June 2013 based on the following assumptions:

I also used our own research on Amazon pricing changes for the M1 large instance to show the fluctuations in price over the last six years.

In the first chart I just show the movement of the price and cost: 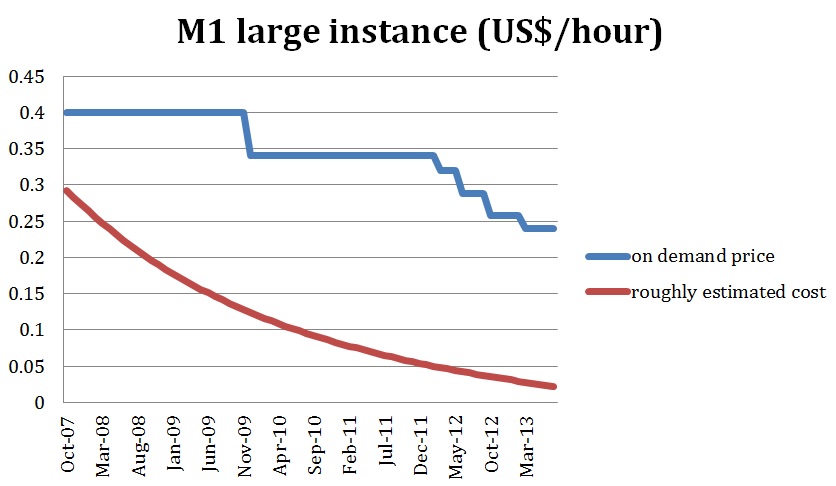 If you look at this chart it does not look so bad, does it? It even seems like Amazon got really more aggressive about pricing in the last year and a half.

But if you calculate the gross margin (in %) then the chart turns out to be a monumental “mountain of margin”. 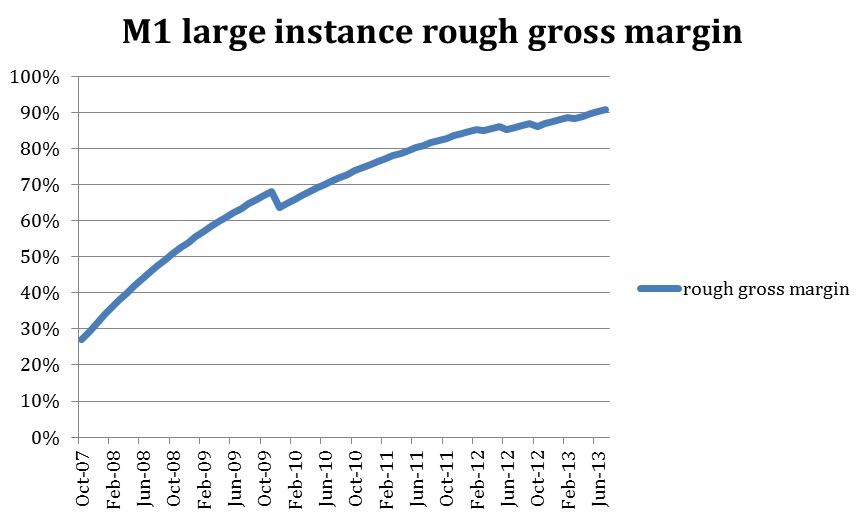 You can see this draws a very much different picture of the movement of Amazon’s AWS margins than is generally perceived.

Amazon started back in 2006 with what I’ve estimated to be a pretty small and aggressive gross margin of something around 30 percent. Over time mainly due to the everlasting depreciation of hardware cost, the margins rose. Amazon did one correction in 2009, roughly stepping back from 70 percent to 60 percent margin, but then continued profiting from lower costs until the gross margin reached an obscene 85 percent (again, based on my estimated calculations).

All of price cuts that happened since 2012 merely fixed the gross margin at an 85 percent to 90 percent level (still growing slowly).

Any service provider certainly needs healthy gross margins to pay for development, management, marketing, sales and overhead. But I think just about anyone one reading this would agree that a 90 percent gross margin is unreasonably high.

Most of the companies in our industry orient their pricing at Amazon, including competitors like Google and Microsoft and also vendors of added services. We as an industry work with an inflated pricing that ultimately hurts the acceptance of our products in the market unnecessarily.

Let’s all move on and make cloud computing affordable for a wider audience. By doing so, cloud computing will surely cross the chasm and unleash tens of thousands of organizations from the shackles of on-premise IT.

Andreas Gauger is Chief Marketing Officer and Co-Founder of ProfitBricks. Andreas co-founded the first German web hosting company in 1995. He is a specialist in product marketing, company mergers and acquisitions (M&A), and was responsible for the entire 1&1 web hosting product range up to 2008.