GamesBeat recently compared the most popular multiplayer online battle arena (MOBA) titles such as League of Legends, Heroes of Newerth, and Dota 2 to each other, but many other games in the genre are also worth checking out. Below you’ll find a selection of MOBAs from the past, present, and future and the unique elements they have to offer. 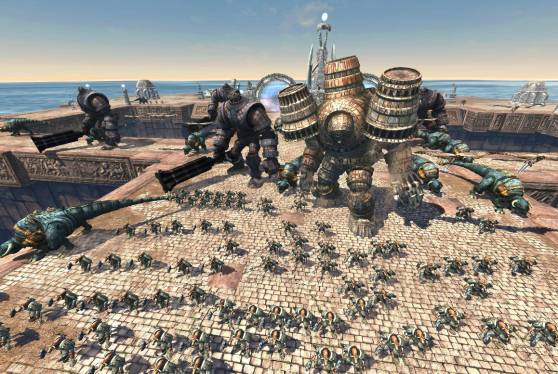 Gas Powered Games developed Demigod and released it in 2009 for the PC after sizable delays. Defense of the Ancients, the Warcraft III custom map that launched the MOBA genre, is among the title’s obvious influences. Demigod offers both action-role-playing and real-time strategy gameplay, allowing players to control either an assassin hero who fights on the frontlines or a general who builds and maintains the army.

Sadly, Demigod launched with severe technical issues and never really recovered. You can find it on Steam and other services now, often at a large discount.

Smite, a more recent release, is one of the most popular alternatives to the traditional top-down visual approach most MOBAs and League of Legends-wannabes have adopted. Smite zooms down into the action and features a third-person camera that follows characters onto the battleground. The enhanced field of vision means that you can spot danger from farther away as well as get a better view of the spectacular spell effects.

Out of all the titles on this list, I recommended Smite most for individuals looking to try something different than the “Big Three.” 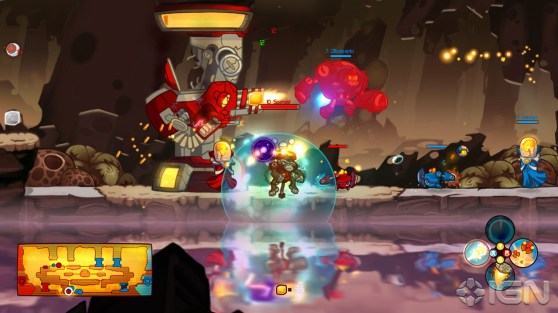 Like Smite, Awesomenauts offers all the trademarks of MOBA gameplay wrapped in an even more unique presentation. Where all other games on this list are 3D in some way, Awesomenauts is a 2D side-scroller, complete with hand-drawn art.

Every match or respawn sees the player rocketing down from the sky in a small coin-collecting minigame, but don’t worry: Once your feet are on the ground, it’s all destroying towers and purchasing abilities as usual.

Awesomenauts is a fresh take on the MOBA genre, and it has the rare advantage of being available on home consoles unlike the majority of options on this list. Even on the PC, you may want to try playing with an Xbox 360 controller. 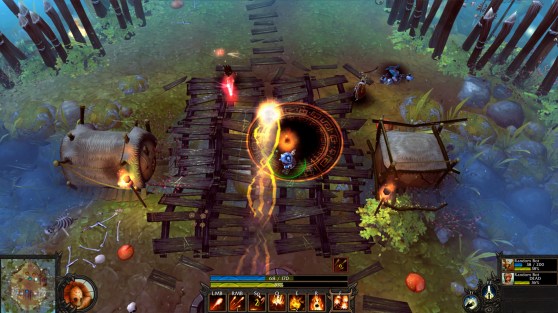 This Swedish-developed, award-winning Microsoft XNA title is a mishmash of various different releases. A 5-on-5, top-down MOBA with much in common with its competition, Bloodline Champions has a few extra tricks up its sleeves, including Street Fighter-inspired “EX” variations of skills and more skills per character than typical entries in the genre.

It’s also one of the few that thankfully uses WASD controls instead of mouse clicks (thank you!). Yet both the community and the support (especially in the West) seems to have died out for Bloodline Champions. Although you can jump into bot matches in case you really want to give it a go on Steam, the archaic UI and no promise of a future might lead you elsewhere. 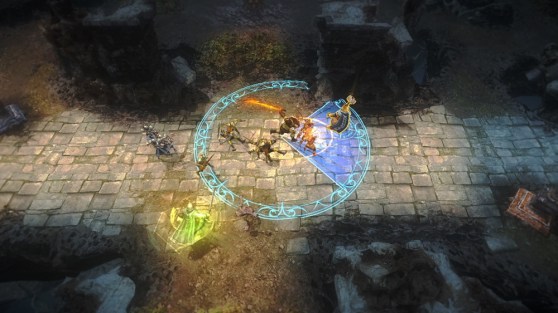 A MOBA set in The Lord of the Rings universe? The potential was just so damn good. Gandolf, Gollum, and Eowyn fighting side by side against the Witch King, Legolas, and a Balrog? Done. A bunch of characters from the books that people who only play the games and watch the movies have never even heard of? Check.

If you’ve followed The Lord of the Rings franchise in video game land over the past generation, then you sadly know what to expect. I’m not sure why such a successful series has garnered some of the most mundane titles and C-list developers possible, but the disappointment keeps on rolling along.

While Guardians is the only traditional, top-down MOBA on home consoles, game-breaking server issues have crippled it since the beginning. Developer Monolith Productions has had plenty of time to make and sell a ton of new downloadable content for the release but has failed to address the broken state of the experience. As you can imagine, its community dwindled quite rapidly.

Guardians arrived on the PC last month, and I was optimistic that it would be more stable after a year of testing and feedback. Zombie Studios’ PC port somehow featured the same exact issues that the Xbox Live Arcade and PlayStation Network versions had all along. With a $20 entry fee and already nearly $100 in DLC, the developers should focus more on putting out the fires in the official forums than trying to shake the coins from the pockets of what few players they’ve already duped. 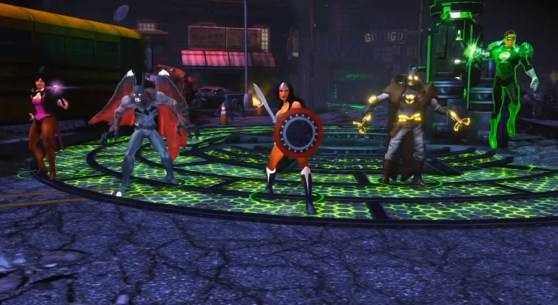 As the newest MOBA on the block, Warner Bros. Interactive and developer Turbine, Inc. (Dungeons & Dragons Online, The Lord of the Rings Online) have a lot to prove, especially after the last major licensed MOBA to try and crack the scene was a thorough disappointment (see above).

Infinite Crisis takes characters from several different DC universes, including Gaslight, Nightmare, Mecha, and Atomic. It’s cool in theory, but for every alternate version of Batman you get, that’s a Harley Quinn, Starfire, or Clayface that got left out of the lineup.

The still-in-beta game features two maps so far: Coast City and Gotham Heights. Neither one is aesthetically interesting, but Infinite Crisis does emphasize unique map-specific boosts and dangers that give the settings a bit more personality. Still, if your team is barely hanging on as is and then the enemy takes control of the Doomsday Device, for example, expect lots of people quitting out midmatch.

Lastly, Infinite Crisis features nice touches, like the ability to pick up cars and hurl them at enemies (as any self-respecting superhero should). Also, recommended items for each character pop up when you can afford them, so you can get what you need in a single click and go back to cracking skulls.

Hopefully, the developers will smooth out the balance and technical issues before the game hits a public launch, but I think the foundation for a potentially worthwhile MOBA is there. The title could have tons of staying power since it draws from plenty of characters and locales, but it’s too soon to tell if Warner Bros. Interactive will give this one the proper support that Guardians of Middle-earth never had. 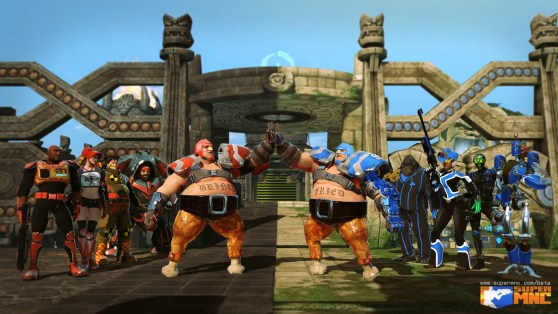 Monday Night Combat first debuted on Xbox Live Arcade before making its way to PC and getting a souped-up makeover. The now free-to-play SMNC features towers, minions, and enemy bases to destroy a la every other MOBA — but wrapped in a futuristic sports arena. What really makes SMNC worth your time is the gameplay, which eschews clicks per minute for fast-paced, skill-based third-person shooting.

Unfortunately, the community is either dead or too hardcore for new people to get into, and developer Uber Entertainment seems to have focused its attention on other projects like the upcoming Planetary Annihilation. If you can gather up enough friends for some private matches, I’d definitely recommend checking this one out. 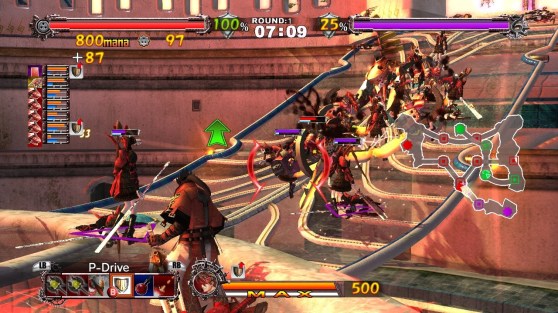 The 5-year-old Guilty Gear 2: Overture features a handful of characters from Arc System Works’ popular fighting franchise but in a format similar to Smite, with 3D characters and a behind-the-back perspective. Gameplay doesn’t follow the point-and-click format, either. It’s more of a mashup of Guilty Gear and Devil May Cry.

Instead of simply destroying enemy towers before taking out a base, players can take control of capture points, which then become spawn points for their armies. Defeating opponents and forcing them to respawn saps a portion of their main base’s life away. Eventually, the enemy will stop respawning, leaving their base defenseless and on the verge of destruction. Even looking back on it now after all these years, it’s still a rather unique take on the genre.

One of my only two complaints is that Overture doesn’t have enough characters to choose from, and only Sol Badguy and Ky Kiske are recognizable names within the playable selection. If the developers ever make another Overture-type entry, I’d definitely like to see Millia Rage and Jam Kuradoberi make the cut. 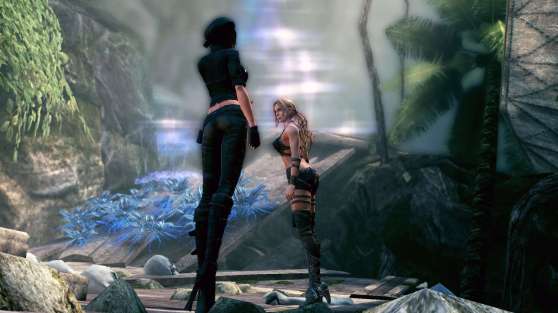 Don’t laugh. Whatever you might think of the “spiritual sequel” to the abysmal action adventure X-Blades, Blades of Time did happen to have a somewhat enjoyable MOBA-style multiplayer mode. Of course, bot matches are where you’ll probably spend most of your time since your friends wouldn’t be caught dead playing this release. But I ended up sinking several hours into the player-versus-player modes one lonely night, and I regret nothing! 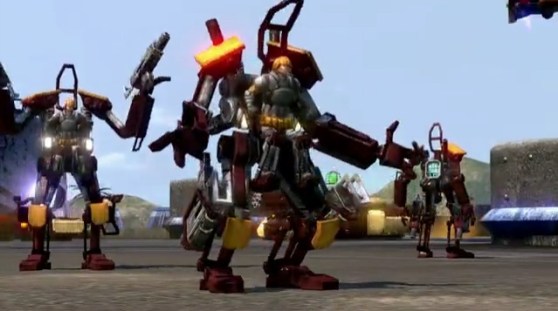 Who’s ready for another troubled release from Trion Worlds? The company originally announced End of Nations as a massively multiplayer, real-time-strategy title years ago, and the studio repurposed it into a MOBA earlier this year. Although End of Nations’ first incarnation entered alpha in mid 2011, its latest version went into alpha yet again on Aug. 8.

It seems like Trion is attempting to act as a jack of all trades, yet everything it touches is suffering as a result. The game maker has dealt with layoffs, keeping its Rift MMO afloat by going free-to-play over the summer, and troublesome server issues on its other MMO Defiance, which is a joint collaboration with the SyFy network.

Recent videos of the game in action are not especially impressive. Anyone with an interest in MOBA-style game with a near-future military theme might be better of checking out Merc Elite.

Strife is an upcoming MOBA offering from Heroes of Newerth developer S2 Games. Among the ways in which it looks to differentiate itself is by focusing on story. Most MOBAs do have stories, but they are often buried within wikis, official forums, or reduced to tidbits shown primarily during loading screens.

You can read our feature on Strife here.

Have you played any of these titles or others that we didn’t list? Which ones have you enjoyed? Let us know in the comments.