After discussing its vision of a digital payments future over the past few years, PayPal is finally making it a reality today with the launch of its new iPhone and Android apps.

The apps (free on iPhone and Android) offer some innovative new features, such as the capability to order and pay for something before you even step foot in a store as well as pay right at the table in some restaurants. But its biggest upgrade is pretty simple: It makes all of PayPal’s existing services far more easy to use.

For example, now you can easily switch between using your payment sources for every transaction; PayPal no longer pushes to use your bank account for everything. Sending money to friends is easier than ever. And PayPal has also added more extensive integration with its Bill Me Later service. Now you can apply for Bill Me Later right from within the app and have a line of credit available in seconds.

These new apps prove that PayPal can both innovate with new features while also making its current technology far more user-friendly.

PayPal’s Anuj Nayar, the senior director of global initiatives, led me on a whirlwind tour of several Manhattan cafes and restaurants to show off the new app. We ordered coffee at the Telegraphe Cafe simply by checking in with the app and telling the cashier to charge us (they identified one of the PayPal reps with me by their profile picture, which showed up in their register). While sipping coffee at the Telegraphe, we ordered ahead for cookies at a bakery, which were ready for us to pick up as soon as we walked in (no line waiting for us).

Nayar points out that without having to deal with the exchange of money, cashiers can have a more human interaction with you. They know your name and what you look like if you check in. They can basically treat you like a regular customer, even if its your first time stepping foot in their shop.

At the hip City Winery restaurant, Nayar demonstrated how you can also settle your bill with the PayPal app. When you ask for the check, you simply need to enter a code into the PayPal app to pull up your bill and pay. Restaurants can tweak the PayPal experience to suit their needs — for example, some restaurants may give you access to your PayPal bill code as soon as you sit down, so you can add new items to the order from directly within the app without bothering your server. (Nayar stressed that restaurant integration is still early, eventually there could be much simpler ways, like viewing a QR code with your phone’s camera, to get your bill without typing in a code.) 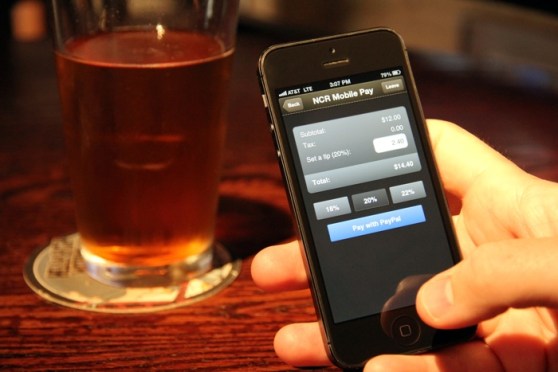 PayPal has also integrated its Groupon-like Offers service directly into the app. Now you can browse for offers and instantly redeem them when you pay through the app. For many consumers, this could be their gateway to using the PayPal app for in-store payments.

I’ve seen PayPal demonstrate much of its in-store payment technology over the past year and a half, but the company has been slow to roll out the truly innovative stuff. Instead, we’ve seen more half-hearted attempts like its Home Depot point of sale integration, which enables you to check out by typing in your PayPal credentials (a significantly more complicated effort than just swiping your credit card).

The company’s deal with point-of-sale giant NCR is paying off in a big way for the new apps. Now PayPal can tap into NCR’s technology in thousands of restaurants, so it doesn’t need to form direct partnerships. PayPal has also joined up with Eat24 to get access to their menu listings (eventually, it could partner with the likes of Seamless and Grubhub).

With the new apps and support from more businesses, what once seemed like a pipe dream for PayPal — the idea that people can just forget about their wallets and manage their payments with their phones — feels within reach.