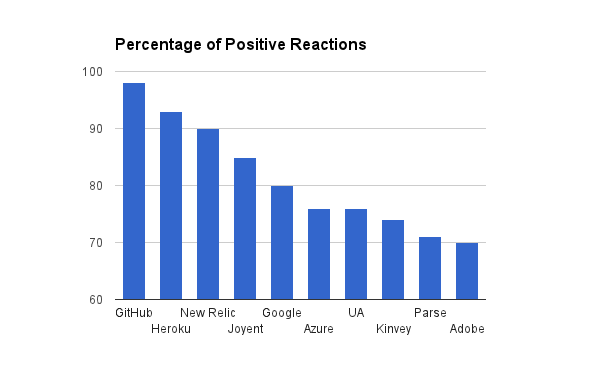 Tools with the most recommendations

If our survey were a mere popularity contest, these contenders would win. However, each one shows qualitative attributes of momentum, market fit, and innovation, as well.

GitHub is a service that hosts code repositories online. It especially works well for open-source projects, as it provides for forking of repos and encourages social collaboration on large or ambitious projects such as new programming languages.

The service includes individual, team, and enterprise pricing options. Each tier allows for different options and features for creating private repositories and collaborating within internal teams. Other interesting features include cover pages, which enable devs to showcase their work in a user-friendly introductory page; desktop and mobile tools for a wide variety of operating systems; and peripheral documentation on topics such as software licensing and startup finances.

The service boasts more than 4 million developer users and more than 8 million code repositories, making it one of the largest developer services on the web. Momentum in user acquisition has been strong, with one million developers signing up for new accounts between August 2012 and January.

Financially, GitHub was bootstrapped from its launch in 2008 until July 2012. The majority of the company’s revenue comes from enterprise customers that use the service to coordinate and collaborate on large, internal codebases. In July 2012, GitHub took a huge $100 million first round of funding led by Silicon Valley superfirm Andreessen-Horowitz. This round stands as the largest investment that Andreessen has made to date.

For GitHub’s roadmap and future plans, cofounder Tom Preston-Werner told VentureBeat the company will focus on monetizing the enterprise, creating more clients for different operating systems, and continuing to create useful features for developers as well as para-development personnel such as technical writers and web designers. “Specifically, there’s a strategy called ‘GitHub Everywhere.’ We want everyone in software to be using GitHub,” said Preston-Werner, “individuals by themselves, small teams, students, as well as big, massive enterprises.”

“We have geographically disperse teams and do a lot of distributed development. We tried several version control systems, including SVN. We even tried to install Git on our server and manage it ourselves. None were as convenient to use as GitHub. Creating branches, marking repositories are all really easy to do with GitHub. This way, we can focus on what we do best: sling code.”

“It is quite a headache to host and manage your own code repository. It completely takes away time and resources from what’s really important, which is your product! GitHub makes it so easy to share and collaborate on development, especially when your team is distributed all over the globe. Not to mention all the available open source projects that are on GitHub. They can save teams hundreds if not thousands of hours of development.”

“Excellent product. Excellent documentation and community. Easy to use, and definitely a vital part of the open-source community.”

Heroku is a platform-as-a-service (PaaS) company for users to deploy, run, and manage applications written in Ruby, Node.js, Java, PHP, Perl, Python, Clojure, and Scala. The Heroku platform began as a service for Ruby developers and continues to add more languages and technologies to its suite of tools and services.

As of May 2012, Heroku hosts 1.5 million applications, with that figure having increased fifteenfold since January 2011. When the company announced new capabilities for Facebook developers in September 2011, it recorded 34,000 new users within 24 hours. And after adding an initial cohort of 12 add-ons, the company announced it had seen four million installs between 2009 and 2012.

The company was acquired by Salesforce.com, a publicly traded company, in 2010 for $250 million. While Salesforce does not break out financials on Heroku, the parent company’s quarterly revenues for Q1 2014 totaled $893 million.

In the near future, Heroku plans to continue expanding its products to include the longer tail of developers and technologies. “Heroku started about Ruby on Rails, that was absolutely our community,” said general manager Oren Teich in an interview. “One of the things we’ve done in the process of building out Heroku, we launched a new stack, Cedar, that enabled us to support anything. There’s a few open-source packs people have built. … So it’s not a technical question; it’s a community question. That Middle American dad programmer using .NET, how do we respect and engage with that community?”

“We use Heroku less frequently [than GitHub], but we definitely think PaaS in general are helpful for small and/or startup teams that just don’t have the time and resources to be messing around with server administration and configuration. Again, this allows time to focus on the product and feature development. PaaS companies also allow small startups/teams to handle scaling for their initial growth without the hassle of having to learn how to scale infrastructure if they have no experience.”

“Ultra-easy to use. Free plan to test things around. Great service, and good support.”